During a tour of the four Eastern European battle groups this month, Jens Stoltenberg, the Secretary General of NATO, stated that the world is in its most dangerous state in a generation. The former Norwegian Prime Minister, who entered his current position in 2014, this week presides over an alliance that faces two dynamic strategic fronts. At present, the first is characterised by the overt North Korean ballistic missile development campaign in the Pacific; and the second by a massive Russian military manoeuvre in Eastern Europe.
Stoltenberg has insisted that neither one puts the physical integrity of any NATO member in jeopardy. However, as the Pacific threat gradually increases while the Eastern movements intensify this week, an uncommon overlap is taking place. While NATOâs most significant member, the United States, is occupied with a complex diplomatic exchange over Korea, the far smaller members in the Baltic Region perceive an existentially menacing exercise on their doorstep. A fundamental concern of NATOâs (and a fundamental goal of Russiaâs), is the inadequacy of a NATO response to an attack on one of its more vulnerable signatories.
The Exercise: Troop Numbers, Locations and Capabilities
The ZAPAD exercise, which began on the 14th of September and is expected to take around one week, is a joint operation conducted by Russia and Belarus. It occurs every four years, but the 2017 incarnation is expected to be the largest ever. It comes at a time when the Russo-sphere is undergoing a nationwide military renaissance, and will demonstrate large-scale hard power capability along the NATO/CSTO fault line.
ZAPAD 2017
Date of Exercise: 14th – 20th September 2017
Location: Russiaâs Western Military District, Belarus, and Kaliningrad
Primarily airborne and land power demonstrations
Troops involved:
7,200 Belorussian troops (Source: Russian foreign ministry)5,500 Russian troops (Source: Russian foreign ministry)240,000 troops (Source: Ukrainian National Security & Defence Council)60-100,000 troops (Source: U.S. intelligence)
In July, Belarusian Defence Minister Lt. Gen. Andrei Ravkov detailed the locations of ZAPAD training grounds (shown in Figure 1). Belarus will accommodate six ârangesâ at Lepelsky, Losvido, Borisovsky, Osipovichesky, Ruzhansky, Domanovsky and Dretun. Three ârangesâ will be used on Russian territory at Luzhsky, Strugi Krasnye and Pravdinsky in the Kaliningrad exclave. As officials have suggested, activities on these military premises are highly likely to involve exercises in airborne deployment, artillery, and exercises for helicopters, tanks, and armoured personnel carriers.
In addition, Belarusâs Defence Minister Andrey Ravkovâs acknowledgement that the exercise will take part on territory stretching north to the Kola Peninsula implies that the Russian Northern Fleetâs 14th Army Corps will also participate. Although this added naval dimension might be expected of a military power that could become reliant on protecting its warm-water ports in a hypothetical conflict, this insight indicates a numerical ambiguity that has plagued effective analysis of ZAPAD 17. The Northern Fleetâs 14th Army Corps comprises of nearly 10,000 troops, which in itself approaches the limit that the Kremlin outlined prior to the exercise taking place. 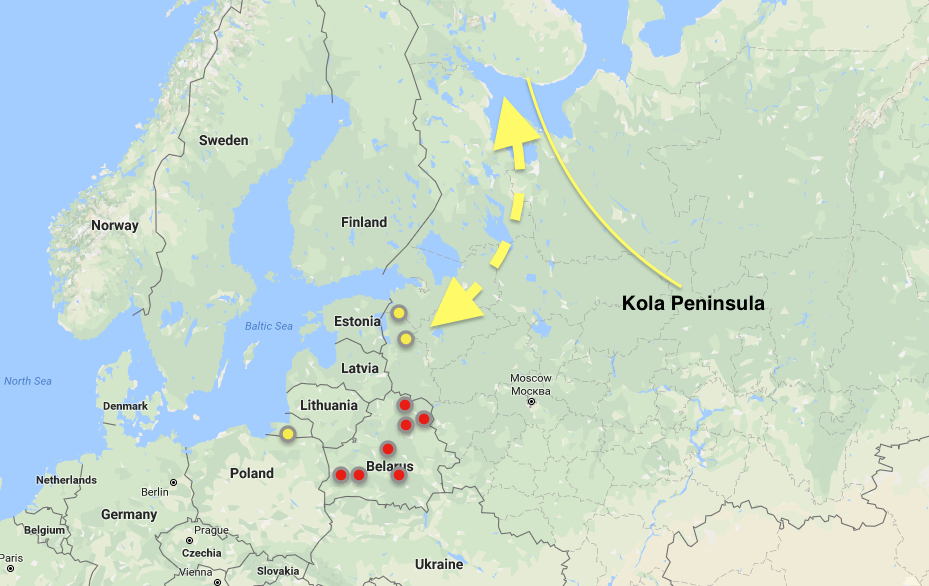 Figure 1: ZAPAD training ranges, where yellow are Russian territories and red are Belorussian. Exercises are expected to involve troop manoeuvres throughout the upper Western Military District and the Kola Peninsula.
The OSCEâs Vienna Document (2011) dictates that member states have the obligation to allow foreign monitoring when conducting military exercises exceeding 13,000 troops. RT News has described European analysis as âNATO hysteriaâ, and indeed a number of NATO member military attachÃ©s have been invited to attend the event. Nevertheless, troop numbers are suspected to far exceed the official figures.
While Russian authorities provided exact numbers, Western sources have treated them with mistrust. Some unofficial analyses have placed estimates as high as 240,000, although this figure is largely discredited. More reliable commentaries remain sceptical of Moscowâs accounts, but maintain a reasonable estimate of around 70,000 participants.
That figure takes into account the three airborne divisions not publicised by Moscow: the 45th, 76th 98th, and 106th Guards Air-Assault brigades under Andrey Serdyukov, which amount to up to 20,000 troops. Furthermore, Vice-Admiral Aleksander Nosatov, the commander of the Baltic Fleet, recently stated, âeventually all the Fleetâs land, air and maritime assets will take part in Zapad-2017â. This injects an additional 12,000 troops from various motorised regiments, artillery brigades, and marines. Overall, Moscowâs official account of fewer than 13,000 troops appears to be knowingly limited.
A Trojan Horse?
Previous Russian military exercises have masked incursions into external territories. For example, troops remained forward deployed after 2008 manoeuvres, and were immediately used to invade Georgia. Such events are well remembered by observers in Ukraine, who fear more intense Russian activity in Donbass after these ZAPAD operations.
While Moscow and Minsk are very close in some respects, the latter is still cautious of Russian troops remaining on Belorussian territory following ZAPAD 17. Any Russian force that does remain would incur additional maintenance costs – burdening an already sanctioned Russian coin purse – and would increase brinksmanship with the NATO presence in Poland and the Baltic states. A more likely move for which the ZAPAD tests may be used as a smokescreen is the reinforcing of Kaliningrad. If the exclave were strengthened outwith any military exercise, NATO forces would be more alarmed. If conducted during ZAPAD, however, the Kremlin could claim plausible deniability.
As far as the Korean crisis is concerned, there is little weight to the argument that ZAPAD is a deliberate provocation while NATO is occupied in East Asia. Although it has complicated Security Council measures against Kim Jong-Un, Russia may in fact be almost as concerned over a North Korean collapse as China is. Both the emerging global powers share land borders with the country, meaning both are at risk of a serious population influx in the still unlikely event of a regime failure there. Furthermore, any military action taken by the U.S. and its allies would bring their troops much closer to a comparatively very weak Russian district.
Summary
In essence, the ZAPAD exercise is a show of military force from Russia. While it takes place every four years, the 2017 operation will likely be the largest yet, making a loud statement of the national rearmamentâs progress.
There is no consensus on the numerical estimates of Russian troops, however the Kremlinâs official count of 13,000 seems to be a serious diversion.
ZAPAD need not be perceived as inherently hostile (war-gaming of this kind is conducted by all major powers), however, the timing of this yearâs exercise coincides with an increasingly tense Korean situation. As the exercise enhances Russiaâs military capability along the NATO/CSTO fault line, the Alliance faces more unwanted activity on its two distant fronts. Subsequently, pressure for NATO to deliver on its contractual promise of military support is heightened.
Back to Reports & Resources