Date: 15 October 2017
Period Covered: 12:01hrs 07 OCT 2017 â 23:59hrs 13 OOCT 2017 (GMT+7)
EXECUTIVE SUMMARY
This week has seen the status quo continue in Thailand, with incident data so far indicating that October 2017 is POSSIBLY going to be a period of low activity across the country. The floods which have been occurring indicate this kind of hazard will continue for the time being as prior understanding of seasonal conditions in Thailand would now appear to be incorrect. However, it is POSSIBLE that Bangkok and the South-East will be exceptions to this. With the upcoming Royal Funeral and anniversary of the Tak Bai protests, these two parts of Thailand will POSSIBLY see an increase in activity.
INTRODUCTION 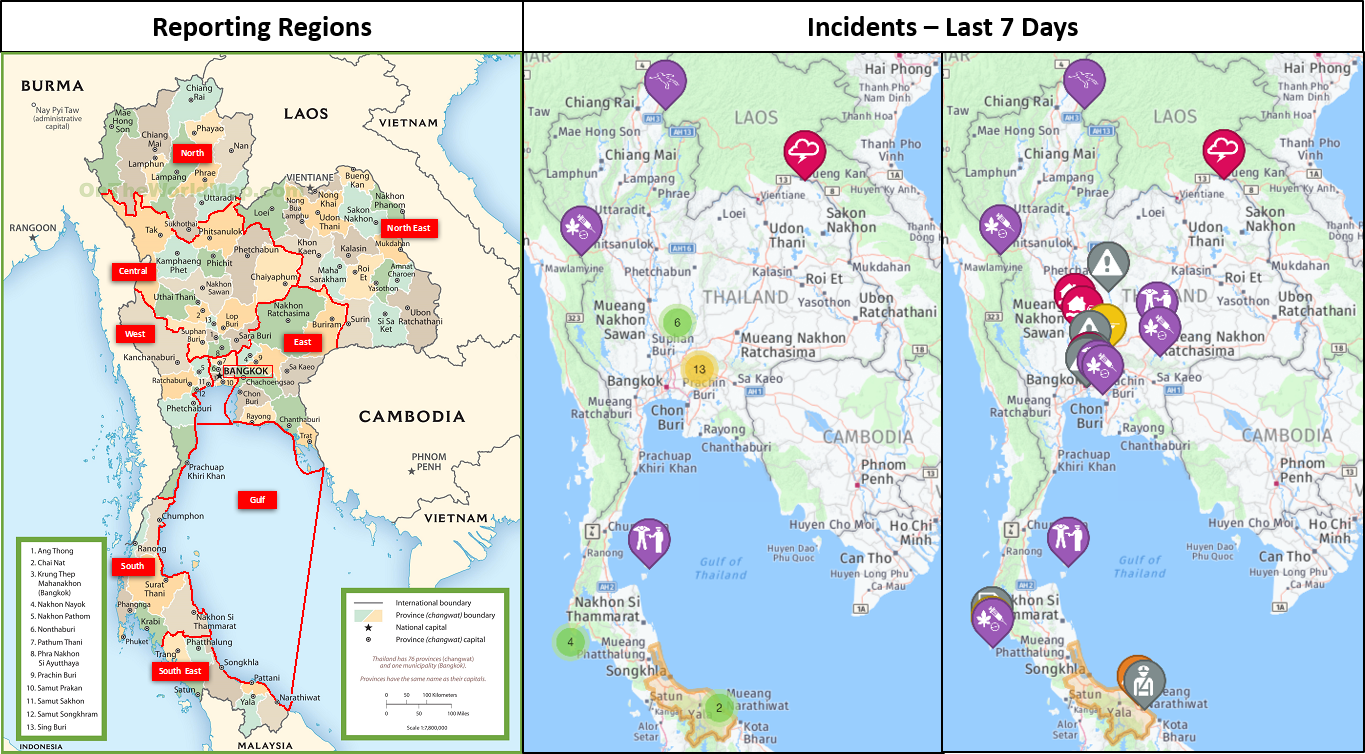 (Click on above image to expand chart)
This Intelligence Report aims to display all the incidents that have occurred during the past week in Thailand, expand on the key incidents in the reporting regions shown in the imagery below and analyse what it means for the country. Over this period there have been 30 incidents throughout Thailand which have been logged on the Intelligence Fusion platform at the time of this report, an almost identical number of incidents which happened in the previous week. Over this week, the types and locations of incidents occurring across Thailand have largely remained the same. However, the number of incidents â and incident rate as a result â appear to be quite low for October so far, not even exceeding one incident per day (McCabe and Harrington, 2017).
Of note though, incidents of flooding â pictured below â have continued across Thailand.

(Click on above image to expand)
This week has seen water reservoirs across Thailand reaching capacity due to heavy rain. Provinces which have already experienced floods as a result are Chaiyaphum, Phitsanulok, Nakhon Sawan, Phayao, Lampang and Pathum Thani provinces â pictured above and right. In addition, flood risks increased in several other areas. Six Central provinces also received particular warnings from the Disaster Prevention and Mitigation Department (DPMD): Chai Nat, Sing Buri, Angthong, Lop Buri, Saraburi and Ayutthaya.
Following the increase in risk, areas to the South of the Chao Phraya Dam in Sapphaya district have been experiencing flooding form the requirement by the Thai authorities to increase the rate of water discharging from the dam. So far, houses along the Chao Phraya river in Sapphaya district itself have been flooded along with Sing Buri province further south experiencing the same after a flood wall broke.
COMMENT. Previous Weekly Intelligence Reports and analysis on Thailandâs Flood Hazards assessed these conditions would POSSIBLY begin to decrease based on prior understanding of seasonal weather in Thailand (PRATTEN 2017c) (PRATTEN 2017a). The continued flooding due to heavy rain has shown this is not the case at this time. COMMENT ENDS.
More significant than the continuing flood hazards in Thailand though have been developments surrounding two upcoming events in Thailand; the funeral and cremation of the late King Rama IX / Bhumibol Adulyadej scheduled for the 25-29 OCT 2017 and the upcoming anniversary of the Tak Bai protests which occurred in 2004 in Narathiwat province. Due to their combined significance, this report will focus on these two events.
NORTH & NORTH EAST
1. Nothing Significant to Report

(Click on above image to expand)
2. 13 OCT 2017: Anniversary of Kingâs Death and Upcoming Royal Funeral Preparations
Last Friday at 15:32hrs marked one year since the death of King Bhumibol Adulyadej (Rama IX). Across the country, ceremonies were held consisting of 89 seconds of silence.
COMMENT. King Bhumibol Adulyadej was the worldâs longest reigning monarch and a much-revered figure across Thailand. Since his death last year, there has been an official 12 month mourning period and preparations for his funeral and cremation â to be held over the 25-29 OCT 2017 â have been a constant feature amongst reports on Thailand. The Royal Urn at the Grand Palace in Bangkok itself has attracted nearly 13 million visits from people paying their respects, the last day of public viewing alone saw 110,000 people visit the Urn, indicating the kind of crowd which will attend the ceremonies from 25-29 OCT 2017 which are open to the public. (PRATTEN 2017c). COMMENT ENDS.
The anticipated schedule of the events over 25-29 OCT 2017 is as follows:

17:30hrs, 25 OCT 2017: Merit-making ceremony before the Urn is moved to the Royal Crematorium at Sanam Luang.

26 OCT 2017: The royal cremation ceremony, which will be divided into three periods. First period

First period at 07:00hrs: The Royal Urn will be transferred by Royal Wagon from Dusit Maha Prasat Throne Hall to the Royal Crematorium at Sanam Luang.Second period at 17:30hrs: Cremation ceremony starts.Third period at 22:00hrs: The Cremation.

Reports detailing how the upcoming funeral and cremation will unfold have indicated some 70,000 security officers will be deployed and additional screening points will be set up. In addition to the deployment of additional security measures, there will be restrictions on coverage of these events through bans on sharing coverage of the event on social media including the disconnection of mobile phone services in some areas. Rehearsals for the cremation and funeral will begin on 15 OCT 2017 which will result in several main road closures and traffic restrictions â including no parking areas and one-way traffic â around Sanam Luang and the Grand Palace. Imagery representing known road closures and restrictions is shown below (Barrow, 2017, The Bangkok Post, 2017, Pungkanon, 2017, Yothasmutra, 2017, McCabe and Harrington, 2017, Senawong, 2017). 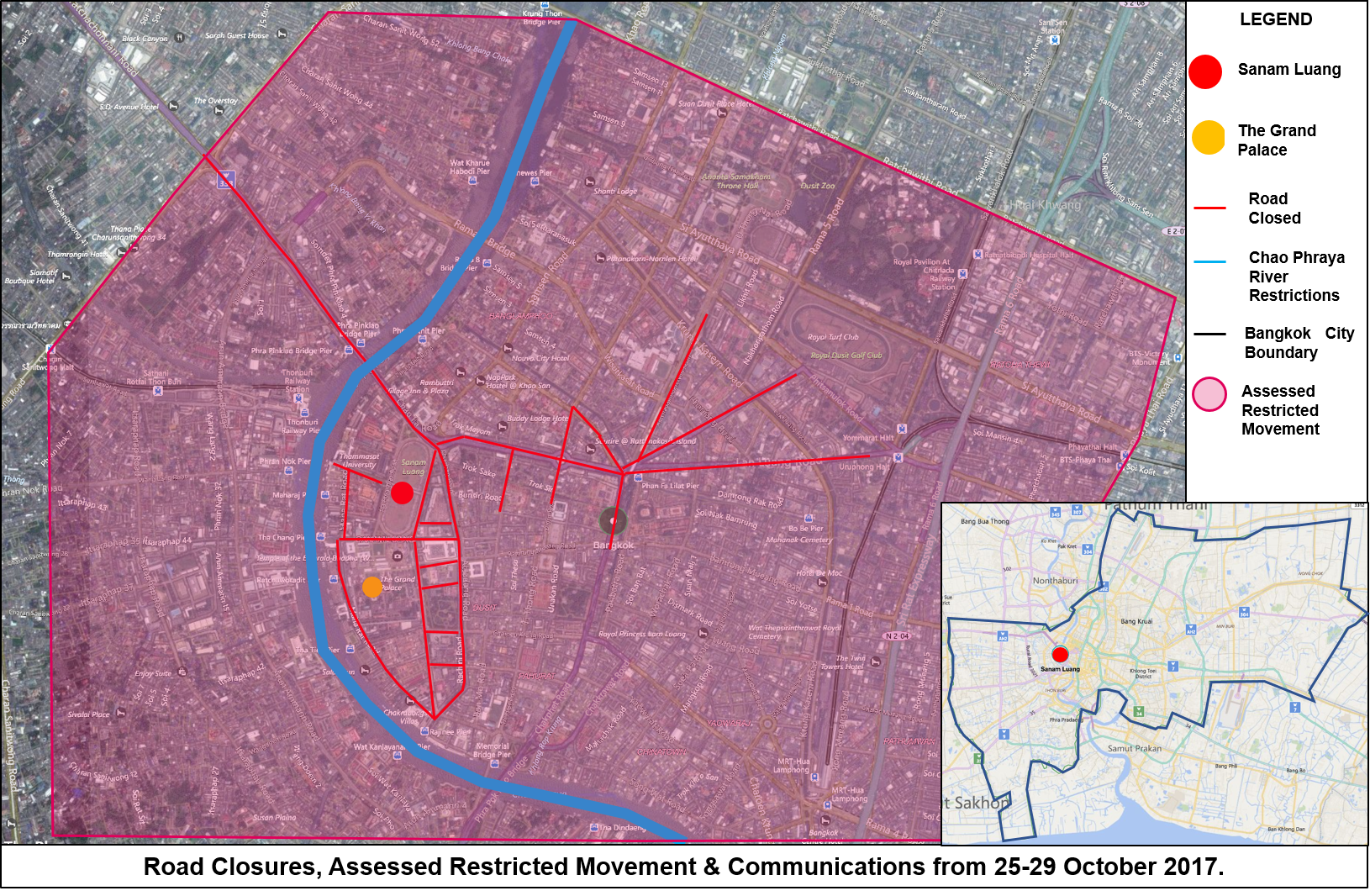 (Click on above image to expand)
COMMENT. Based on the attendance at public viewings of the Urn, long held public reverence towards the late King, known road closures and disclosed security arrangements, movement around this part of Bangkok will be heavily restricted and communications will be difficult. Many areas around Sanam Luang and The Grand Palace could easily be reduced to foot movement only. Based on the imagery above, the various streets around the road closures will experience increased traffic (Bing Maps, 2017). COMMENT ENDS.
CENTRAL, EAST, WEST & SOUTH
3. Nothing Significant to Report
SOUTH EAST 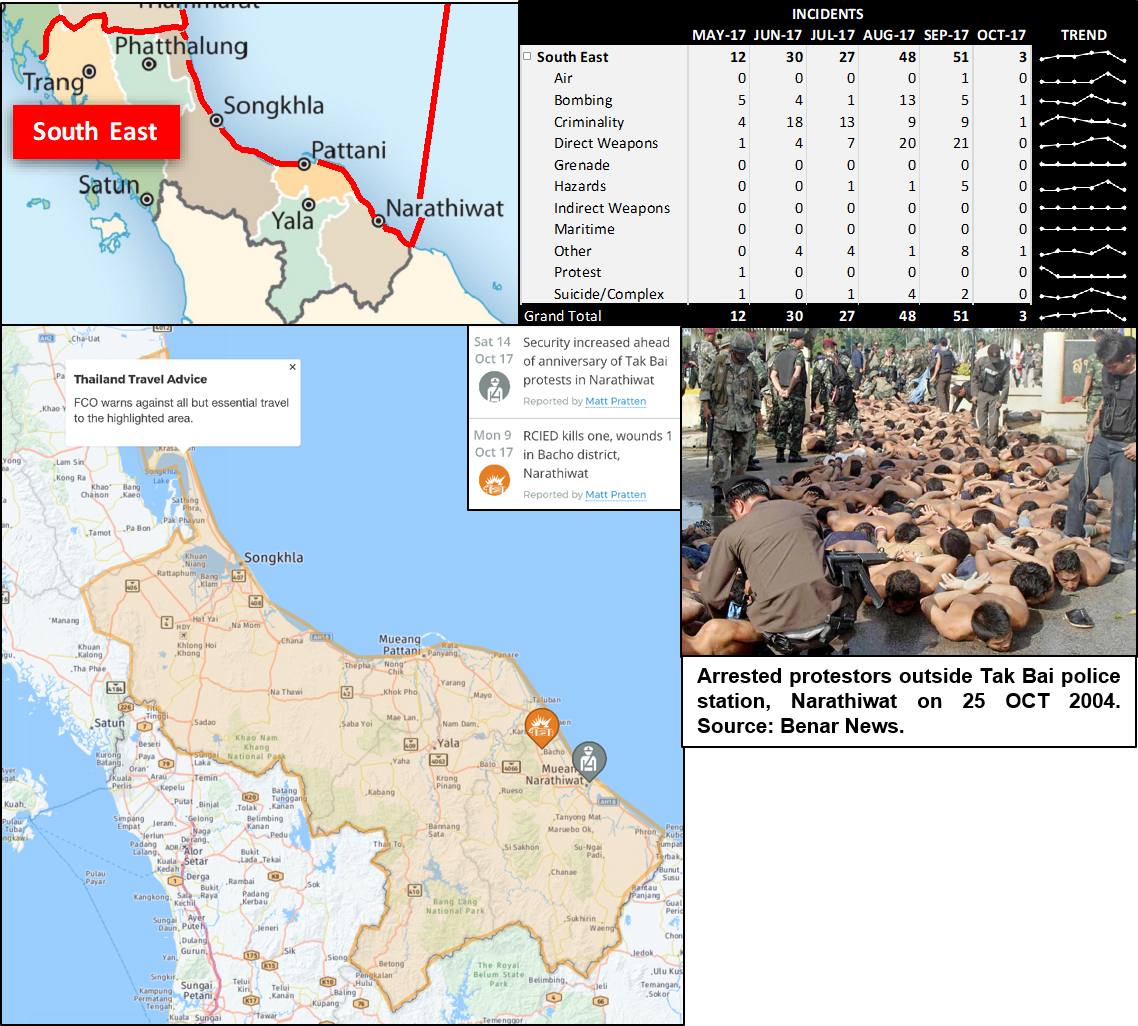 (Click on above image to expand)
4. 14 OCT 2017: Security Increased Ahead of Anniversary of Tak Bai Protests in Narathiwat
Security has been increased ahead of the 13th anniversary of the Tak Bai incident on 25 October 2017, which falls during the royal cremation ceremonies for the late King. Amram Baka, Deputy Chief of Mueang Narathiwat district, revealed there might be unrest caused by insurgents during this period. Police checkpoints will be more frequent and officials have been warned to be more vigilant because military forces have been withdrawn from some villages in the region.
COMMENT. The âTak Bai incidentâ mentioned above refers to an event that occurred on 25 October 2004. 2,000 people gathered at a playground opposite a police station in Tak Bai to protest the detention of six local volunteer security guards who were accused of supplying insurgents with stolen government-issued weapons. Seven demonstrators were killed when authorities opened fire on the crowd. After police and soldiers arrested several more protestors, another 78 died of suffocation while being taken away in trucks to a military camp in Pattani province, according to official autopsies (Benar News, 2015).
The incident occurred six months after 32 suspected insurgents were killed when Thai security forces stormed the Krue Se Mosque in Pattani. These two events re-ignited the insurgency that started in the 1960s. Since 2004, more than 6,000 people have been killed in violence associated with the insurgency. Since then, insurgents have continued to mark the anniversary of this event violently.
Recent analysis conducted on insurgent activities in the South-East of Thailand indicates that all the insurgent groups in the South-East are PROBABLY becoming much more effective in carrying out attacks to cause casualties; through combining their use of small arms and improvised explosive devices (IED) into âComplex Attacks.â 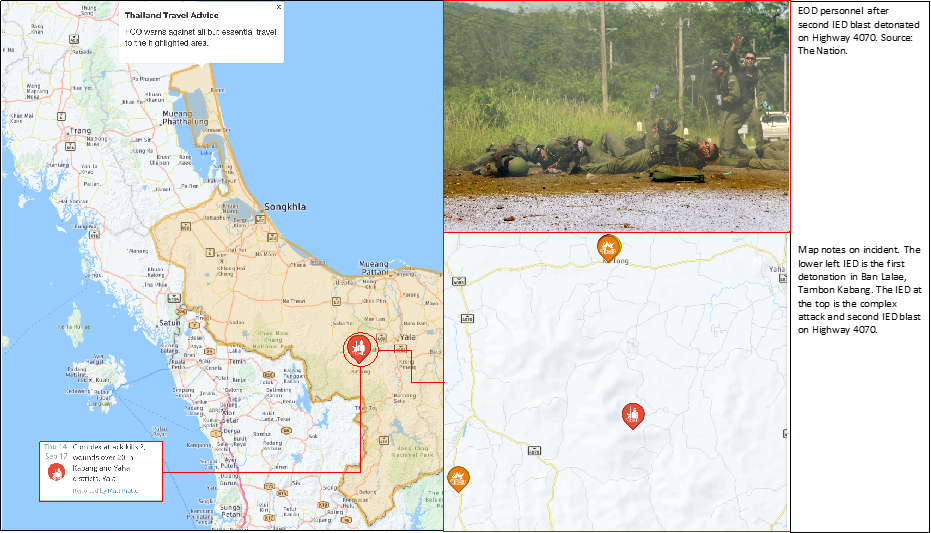 (Click on above image to expand)
Among the most effective were the Complex Attacks on 14 & 22 SEP 2017 where insurgents were able to kill and wound several Thai security personnel; the 14 SEP 2017 Complex Attack â pictured above â was able to kill two and wound up to 20. The majority of the casualties were Explosive Ordnance Disposal (EOD) members. With the increasing effectiveness of insurgent attacks and attention towards the upcoming funeral and cremation, insurgents could find it much easier to plan and carry out attacks (McCabe and Harrington, 2017, PRATTEN 2017b). COMMENT ENDS.
ASSESSMENT

This week has seen the status quo continue in Thailand, with incident data so far indicating that October 2017 is POSSIBLY going to be a period of low activity across the country. The floods which have been occurring indicate this kind of hazard will continue for the time being as prior understanding of seasonal conditions in Thailand would now appear to be incorrect. However, it is POSSIBLE that Bangkok and the South-East will be exceptions to this. With the upcoming Royal Funeral and anniversary of the Tak Bai protests, these two parts of Thailand will POSSIBLY see an increase in activity.
Based on the previous attendance of public viewing of the Royal Urn, long held reverence for the late King, schedule of events, traffic and river restrictions as well as increased security arrangements, the upcoming Royal Funeral and Cremation of King Bhumibol Adulyadej will PROBABLY mean that movement around the city of Bangkok â particularly the areas near The Grand Palace and Sanam Luang â will be heavily restricted over the period of 25-29 OCT 2017 and POSSIBLY afterwards. Movement around The Grand Palace and Sanam Luang will PROBABLY be limited to foot traffic only and this could POSSIBLY be the case for the assessed restricted movement areas or even beyond them.
The restrictions on coverage of the Funeral and Cremation will POTENTIALLY mean that mobile phone coverage will be cut or heavily restricted and filming/photography of any kind will not be allowed. Unless attending the upcoming ceremonies, this part of Bangkok would best be avoided.
With the upcoming Funeral and Cremation coinciding with the anniversary of the Tak Bai protests, insurgents in the South-East will POSSIBLY have greater freedom of movement to plan and prepare attacks as security forces and government officials will be trying to balance observing the Royal Funeral and Cremation along with maintaining security. With previous anniversaries of these protests being marked with violence, the period of 25-29 OCT 2017 will POTENTIALLY experience a number of attacks occurring against security forces, government officials or even just the general public in the South-East of Thailand. This period will PROBABLY see an increase in the threat from small arms attacks, IED attacks and Complex Attacks in Narathiwat, Pattani and Yala provinces.
References
BARROW, R. 2017. Road and River Closures for King Bhumibolâs Funeral in October. Thai Travel News [Online]. Available from: http://www.thaitravelblogs.com/2017/10/road-and-river-closures-for-king-bhumibols-funeral-in-october/ [Accessed 15 October 2017].
BENAR NEWS. 2015. Victims Cannot Forget Tak Bai Tragedy in Thailand. Benar News [Online]. Available: http://www.benarnews.org/english/news/thai/Tak-Bai-10222015155832.html [Accessed 14 October 2017].
BING MAPS. 2017. Bing Maps [Online]. Washington: Microsoft. Available: https://www.bing.com/maps?FORM=Z9LH3 [Accessed 15 October 2017].
MCCABE, M. &amamp; HARRINGTON, D. 2017. Intelligence Fusion Platform [Online]. London: Ambix. Available: https://www.intelligencefusion.co.uk/ [Accessed 12 August 2017].
PRATTEN M. 2017a. Fortnightly Snapshot: Thailand’s Flood Hazards. Intelligence Fusion [Online]. Available: https://www.intelligencefusion.co.uk/single-post/2017/09/04/Fortnightly-Snapshot-Thailands-Flood-Hazards [Accessed 08 September 2017].
PRATTEN M. 2017b. Thailand Fortnightly Snapshot: Update on the Insurgency. Intelligence Fusion [Online]. Available: https://www.intelligencefusion.co.uk/single-post/2017/10/04/Thailand-Fortnightly-Snapshot-Update-on-the-Insurgency [Accessed 08 October 2017].
PRATTEN M. 2017c. Weekly Intelligence Report: Monitoring in Thailand – 10 October 2017. Thailand [Online], 10 October 2017. Available: https://www.intelligencefusion.co.uk/single-post/2017/10/02/Weekly-Intelligence-Report-Monitoring-in-Thailand [Accessed 14 October 2017].
PUNGKANON, K. 2017. Royal Cremation Schedule Announced, Ceremonies Open to the General Public. The Nation [Online]. Available: http://www.nationmultimedia.com/detail/national/30328478 [Accessed 14 Ocotebr 2017].
SENAWONG, J. 2017. Mourning Areas on Royal Cremation Day to Feature Tight Security. The Nation [Online]. Available: http://www.nationmultimedia.com/detail/national/30329207 [Accessed 14 October 2017].
THE BANGKOK POST. 2017. Royal Cremation Live Coverage by Reporters Banned The Bangkok Post [Online]. Available: https://www.bangkokpost.com/news/general/1339578/ [Accessed 14 October 2017].
YOTHASMUTRA, C. 2017. Traffic Rearrangements on Oct 25-29 During Royal Cremation Ceremonies. Thai
PBS [Online]. Available: http://englishnews.thaipbs.or.th/traffic-rearrangement-royal-cremation/ [Accessed 14 October 2017].
NB â For the sake of efficiency, references mentioning myself or the Intelligence Fusion platform are built upon the collection and logging of incidents based on the combination of numerous open sources such as mainstream media, social media and open source mapping tools.
Back to Reports & Resources