Date: 31 October 2017
Period Covered: 00:00hrs 22 OCT 2017 to 23:59hrs 29 OCT 2017 (GMT+7)
EXECUTIVE SUMMARY
This week has seen a large focus on the Royal Funeral and Cremation which has POSSIBLY allowed other major activities across Thailand to go largely unnoticed; with the floods and crime being the exceptions. With the Royal Funeral and Cremation concluded, it is POSSIBLE that other issues and recurring incidents across the country will begin to be noticed more frequently. This is particularly the case with progress towards the return of democratic rule in Thailand.
INTRODUCTION 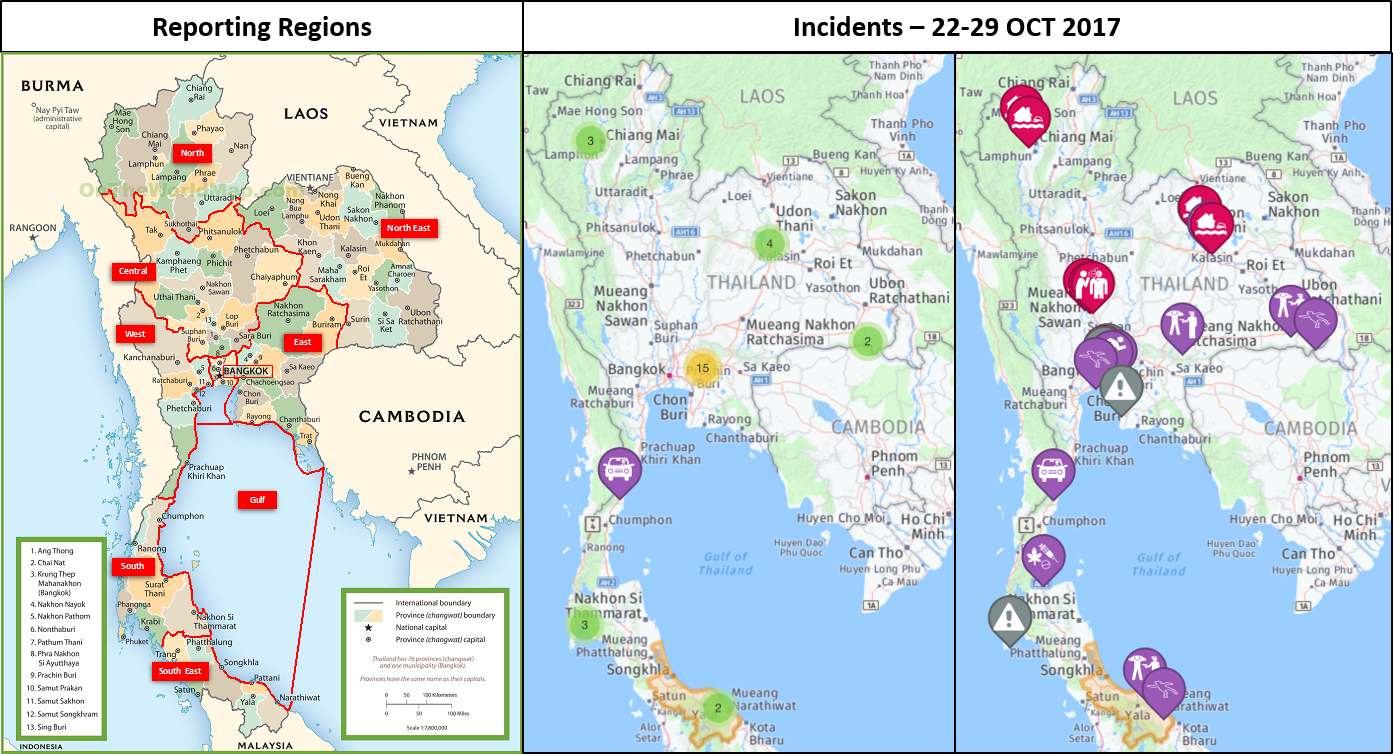 (Click on above image to expand chart)
This Intelligence Report aims to display all the incidents that have occurred during the past week in Thailand, expand on the key incidents and analyse what it means for the country. Over this period there have been 30 incidents throughout Thailand which have been logged on the Intelligence Fusion platform; a decrease from last week. Although this week has seen the number of incidents per day increase from 3.26 incidents per day from last week to 4.16 incidents per day; putting the average level of activity for October to similar levels seen in July and August 2017. Bangkok has continued to be the most active area of Thailand this week with other parts of the country having a low amount of activity by comparison. âOtherâ types of incidents along with âCriminalityâ and âHazardsâ have made up the bulk of reporting in the country over the week (McCabe and Harrington, 2017).
COMMENT. Last weekâs report was almost identical in the types of incidents occurring and noted that activity across Thailand revolved around the floods up in the North, North-East and Central reporting regions, the upcoming Royal Funeral and Cremation in Bangkok and attacks occurring in the South-East in the lead-up to the Tak Bai protests anniversary. Prior analysis assessed that it was PROBABLE the level of activity seen would continue right until the end of October; with incidents being concentrated in the above-mentioned reporting regions; with flooding and associated hazards POSSIBLY remaining for at least the duration of November (PRATTEN 2017b). COMMENT ENDS.
COUNTRY-WIDE SIGNIFICANCE 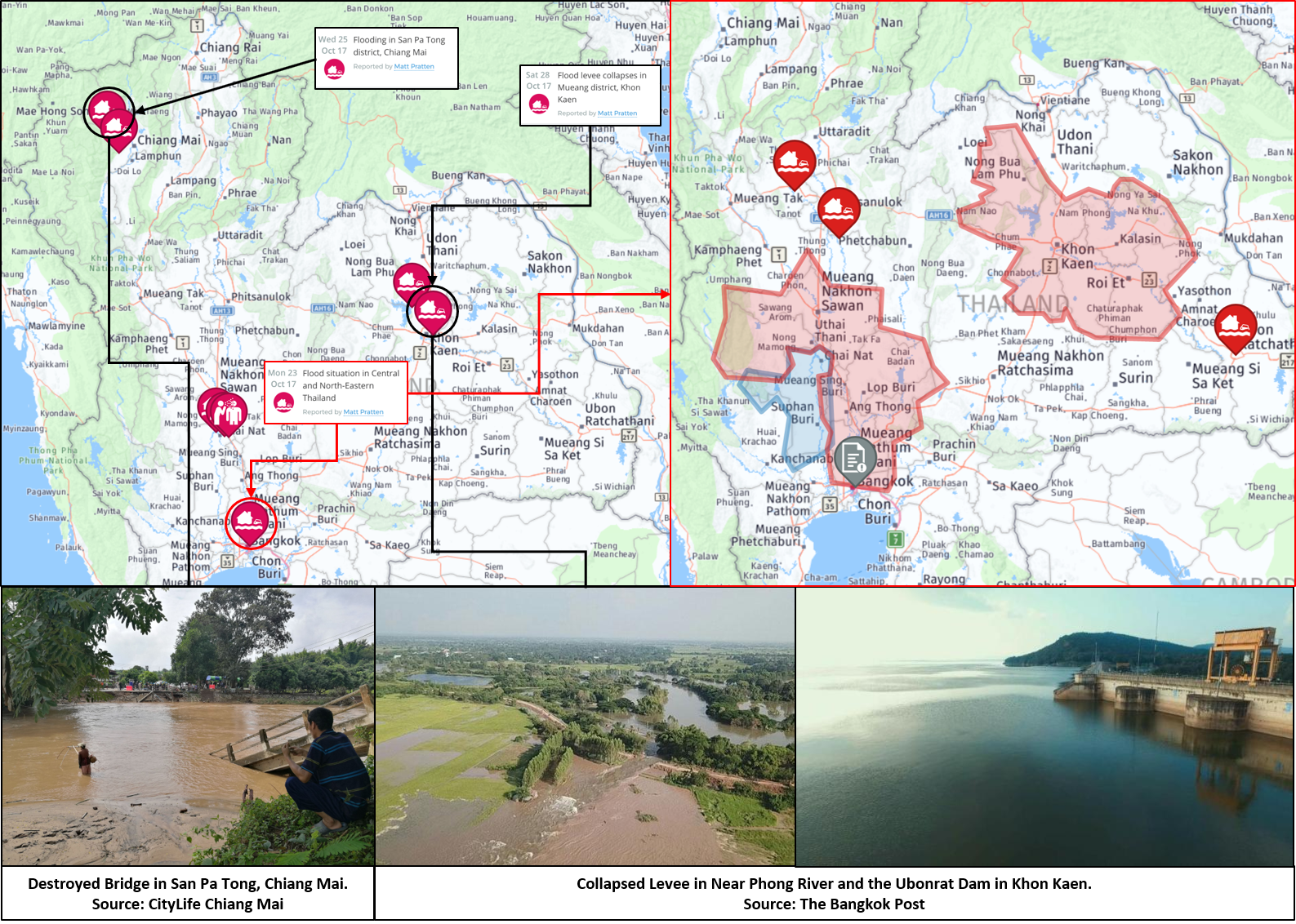 (Click on above image to expand)
1. 22-28 OCT 2017: Flooding Continues Across North, Central and North-East Reporting Regions
Floods have continued across Thailand this week with dams remaining at high capacity or exceeding it; requiring the continuation of high levels of water being discharged to avoid damage to the dams themselves. Early in the week, flooding in Chiang Mai saw one bridge destroyed and water which has inundated Sapphaya district for over two weeks has stagnated. The stagnant water has become a breeding ground for mosquitoes and other insects.
COMMENT. Thailand has had ongoing problems with mosquito borne viruses such as Malaria, Dengue and Zika. Such conditions would exacerbate these viruses in this district (Department of Foreign Affairs and Trade, 2017). COMMENT ENDS.
In addition, the 54 million cubic metres of water per day being discharged from the Ubonrat Dam in Khon Kaen province has contributed to a levee in Mueang district breaking, leaving a 30-metre gap; causing flooding in a special economic area zone of the province utilised for large scale farming.
The latest update given by the chief of the Disaster Prevention and Mitigation Department (DPDM) indicates that over 112,800 families in 17 provinces are still affected by floods. The department’s latest survey found 125,347 families in 2,785 villages and 42 communities from 473 tambon in 78 districts of the 17 provinces were still affected by flooding â shown in the imagery above.
Current assessments from the DPDM and Royal Irrigation Department are that the flooding will begin to recede in about a week. 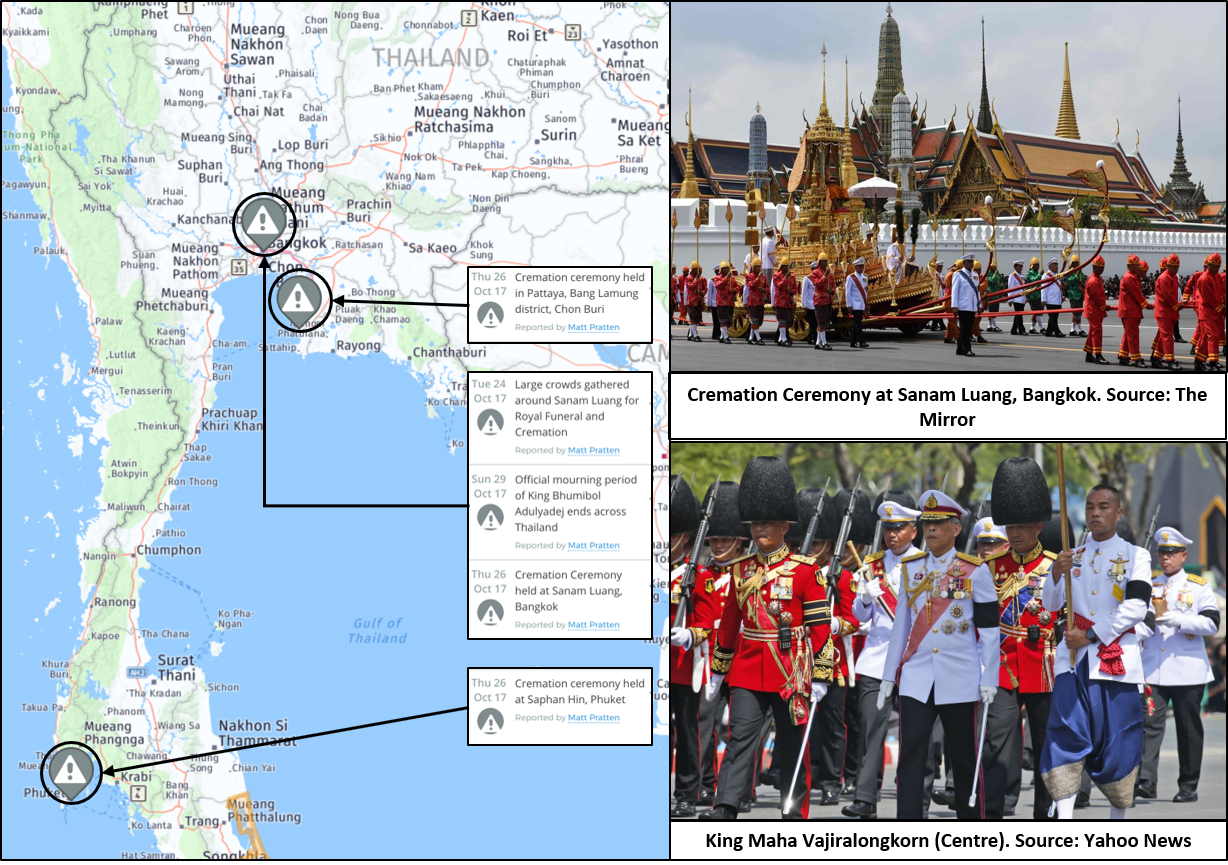 (Click on above image to expand)
2. 26-29 OCT 2017: Cremation of Late King Ends Official Mourning in Thailand
This week saw the long-awaited Royal Funeral and Cremation of the late King Bhumibol Adulyadej â Rama IX â occur at Sanam Luang in Bangkok with ceremonies being held across the country; the incidents in Phuket and Chon Buri are just two of several and all had large attendance numbers. The conclusion of the Funeral and Cremation has thus seen the end of the yearlong official mourning period and also paves the way for the coronation of Rama Xâs â King Maha Vijiralongkorn â who is pictured above.
COMMENT. The Royal Cremation and Funeral has been the most frequently mentioned topic in all open sources used for monitoring Thailand this week; providing little coverage in the way of other major issues save for floods.
The mourning period has seen the several issues related to political stability and return to democracy made lesser priorities due to the reverence of the late King by the Thai people. The reverence towards the late King enabled a continuation of one of his defining features; that being a stabilising influence in Thai politics. Reports surrounding the late Kingâs Cremation have revealed that his only son and thus successor â King Maha Vijiralongkorn â does not possess the same amount of reverence his father had; on the contrary, he appears to be a more divisive figure. Such a difference could see the major developments towards returning Thailand to democratic rule â particularly the passage of remaining Organic Acts â a tumultuous process {Chen, 2017 #602}{McCabe, 2017 #517}. COMMENT ENDS.
NORTH
3. SEE COUNTRY-WIDE SIGNIFICANCE#
NORTH EAST
4. SEE COUNTRY-WIDE SIGNIFICANCE
BANGKOK 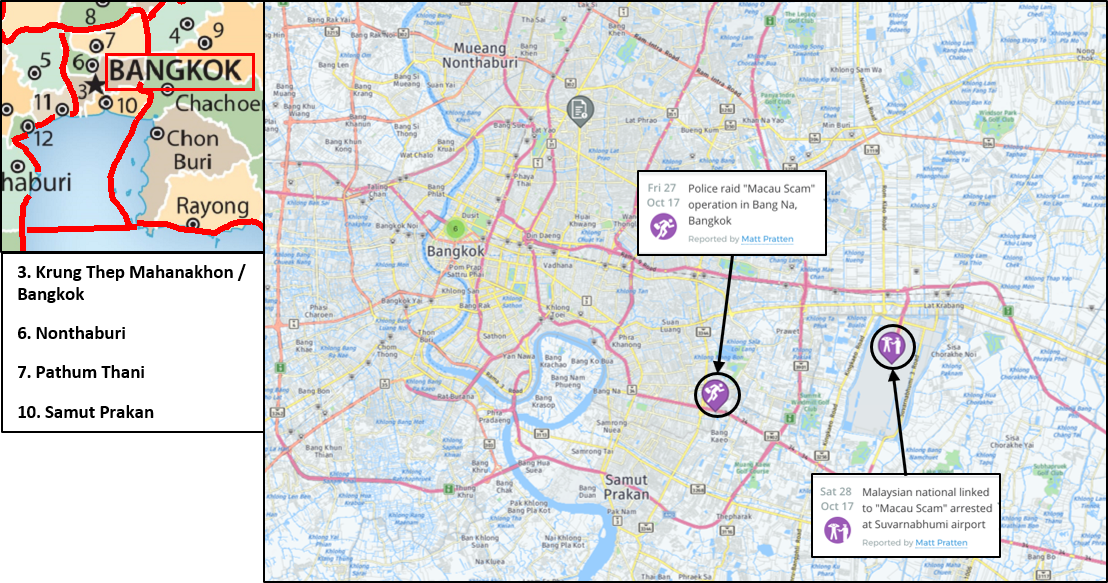 (Click on above image to expand)
5. Summary: Aside from the Royal Funeral and Cremation, the 27-28 OCT 2017 saw police shut down a âMacau Scamâ operation run by Taiwanese and Malaysian nationals. These operations are call centres where the operator phones a prospective victim and pretends to be an official of some description who informs the victim they have received a fine and will need to pay the fine quickly before further legal action is made.
COMMENT. Such incidents have been occurring regularly in Bangkok and have often been operated by foreign nationals. Several recent arrests have featured Taiwanese nationals being behind these kinds of operations (McCabe and Harrington, 2017). An upcoming Snapshot product on Crime will aim to analyse where these kinds of operations fit within Crime incidents in Thailand. COMMENT ENDS.
CENTRAL
6. SEE COUNTRY-WIDE SIGNIFICANCE
EAST
7. SEE COUNTRY-WIDE SIGNIFICANCE
WEST
8. NOTHING SIGNIFICANT TO REPORT
SOUTH
9. NOTHING SIGNIFICANT TO REPORT
COMMENT. Although there have been incidents occurring in this part of Thailand, these incidents would appear to be insignificant on their own for the time being. The majority of incidents in Phuket appear to be related to crime. They will be analysed as part of an upcoming Snapshot product.
SOUTH EAST

(Click on above image to expand)
10. Summary: The murder of a Paramilitary Ranger and arrest of a man possessing what imagery indicates to be an M-4 Assault Rifle along with Yaba and Kratom leaves have bene the only incidents which have occurred this week.
COMMENT. These kinds of incidents have been a frequent occurrence in this part of Thailand. Although, the murder of the Paramilitary Ranger in Narathiwat is an incident that has previously been confined to Pattani province since closer monitoring of Thailand began in May 2017 (McCabe and Harrington, 2017).
In the previous week, it appeared that activity was going to escalate due to the anniversary of the Tak Bai protests on 26 OCT 2017; the same day as the beginning of the Royal Funeral and Cremation ceremonies. With the attention being dedicated to these ceremonies by many across the country and government planning for it, it appeared to provide an ideal time to plan and execute further attacks against security personnel in this part of Thailand. However, security measures were increased in Narathiwat in the lead up to the anniversary (PRATTEN 2017a, PRATTEN 2017c, PRATTEN 2017b). These two incidents this week seem to have made the anniversary of the protests an anti-climax. COMMENT ENDS.
ASSESSMENT

This week has seen a large focus on the Royal Funeral and Cremation which has POSSIBLY allowed other major activities across Thailand to go largely unnoticed; with the floods and crime being the exceptions. Having said that, the incidents of crime â while not individually significant â appear to be POTENTIAL contributors to upcoming analysis on Crime threats in Thailand.
With the Royal Funeral and Cremation concluded, it is POSSIBLE that other issues and recurring incidents across the country will begin to be noticed more frequently. This is particularly the case with progress towards the return of democratic rule in Thailand. However, with the late King finally laid to rest and the conclusion of the official mourning period, there is now an absence of any stabilising influence which King Bhumibol Adulyadej possessed to take its place. Such an absence will POSSIBLY see the gradual re-emergence of political tensions and thus a POTENTIAL return of political instability. Such a scenario could POTENTIALLY be sped up by the actions of King Maha Vijiralongkorn should he continue to be the divisive figure he has reportedly been previously.
The floods which have been occurring appear to be a continuation of what has been happening in previous weeks; leading to little change in the what lies ahead for flood hazards in Thailand. Up until November, hazards posed by floods themselves as well as hazards resulting from them will continue; especially in the North, Central and North-East reporting regions. These will include but are not limited to mosquito borne viruses spreading through stagnant water and damage to roads and infrastructure.
The lead up to the Tak Bai anniversary in Narathiwat appears to have been anti-climactic. However, it is POSSIBLE this is due to the increased security measures which began well before the lead up to the 26 OCT 2017 anniversary. With the anniversary now passed, there is POTENTIAL the additional measures will be stood down, POTENTIALLY enabling insurgents in the South-East reporting region to resume their more regular activities.
References
DEPARTMENT OF FOREIGN AFFAIRS AND TRADE. 2017. Thailand [Online]. Canberra: Department of Foreign Affairs and Trade,. Available: http://smartraveller.gov.au/countries/asia/south-east/pages/thailand.aspx [Accessed 08 October 2017].
MCCABE, M. & HARRINGTON, D. 2017. Intelligence Fusion Platform [Online]. London: Ambix. Available: https://www.intelligencefusion.co.uk/ [Accessed 12 August 2017].
PRATTEN M. 2017a. Thailand Weekly Intelligence Report – 15 October 2017. Thailand [Online], 15 October 2017. Available: https://www.intelligencefusion.co.uk/single-post/2017/10/15/Thailand-Weekly-Intelligence-Report [Accessed 20 October 2017].
PRATTEN M. 2017b. Thailand Weekly Intelligence Report – 22 October 2017. Thailand [Online], 22 October 2017. Available: https://www.intelligencefusion.co.uk/single-post/2017/10/22/Thailand-Weekly-Intelligence-Report [Accessed 30 October 2017].
PRATTEN M. 2017c. Threat Warning: Multiple Attacks In Narathiwat Province. Intelligence Fusion [Online]. Available: https://www.intelligencefusion.co.uk/single-post/2017/10/21/THREAT-WARNING-MULTIPLE-ATTACKS-IN-NARATHIWAT-PROVINCE [Accessed 22 October 2017].
NB â For the sake of efficiency, references mentioning myself or the Intelligence Fusion platform are built upon the collection and logging of incidents based on the combination of numerous open sources such as mainstream media, social media and open source mapping tools.
Back to Reports & Resources