Overall, Thailand’s situation remains at MEDIUM-HIGH for the time being. However, the arrests carried out against DRG activists defying current bans despite warnings from police indicates that Thai authorities will POSSIBLY increase efforts to arrest other activists who have warrants issued from now on. If further arrests occur and stop the protests, it is PROBABLE the overall situation will begin to decrease towards MEDIUM.

This Weekly Intelligence Report on Thailand is intended to analyse what has been happening country wide then delve into Bangkok due to its significance as the nation’s capital and analyse events on one other reporting region – carried out on a rotation basis – in order to delve into SIGACTS as well as examine trends occurring elsewhere more easily. The region to be examined alongside Bangkok this week is the Central Reporting Region.

Over this period there have been 51 incidents throughout Thailand which have been logged on the Intelligence Fusion platform; with Bangkok and the Southern Reporting Regions continuing to be the areas with the highest levels of recorded activity. At this time, levels of activity in Thailand for February are at a total of 60 incidents averaging at 2.14 incidents/day. Based on the trend lines, incident levels across the reporting regions appear to all be lower than last month.

COMMENT. Last week’s report saw January finish as the second highest month of activity over the last 6 months. Given that it is approaching the middle of February, incident trends at this time appear to be providing a slight idea on how the month will finish. February at the moment would appear to be on its way to similar or lower levels than December 2017 (Pratten et al., 2018). COMMENT ENDS. 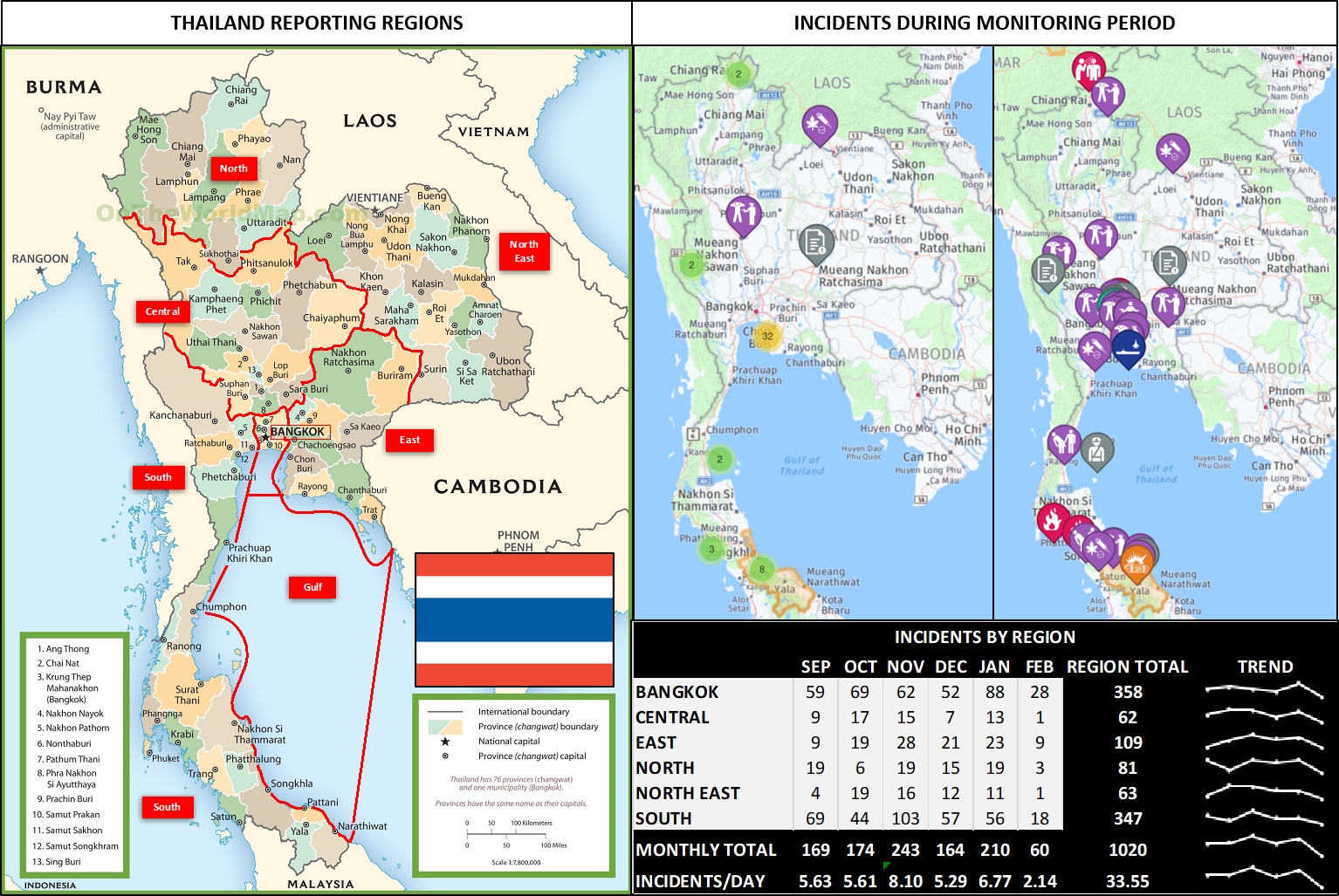 In terms of what types of activity is occurring throughout the country, the graphs and table below indicate that over the period since the last report, there have been slight decreases in the quantity of incidents. However, the severity of incidents would appear to have increased; albeit slightly. Despite the decreases though, the severity of these incidents remains at a MEDIUM-HIGH level. Incidents of ‘Criminality’ and ‘Other’ continue to as the highest levels of incidents due to the ongoing political developments and ongoing issues with individual and organised crime. Criminality continues to be 45% of incidents and ‘Other’ incidents remain at 31%. While it is only a small number of incidents and only comprising 2% of overall incidents logged so far, this week has seen ‘Protest’ incidents continue despite the NCPO’s ban on political activities (Pratten et al., 2018; McCabe and Harrington, 2018) 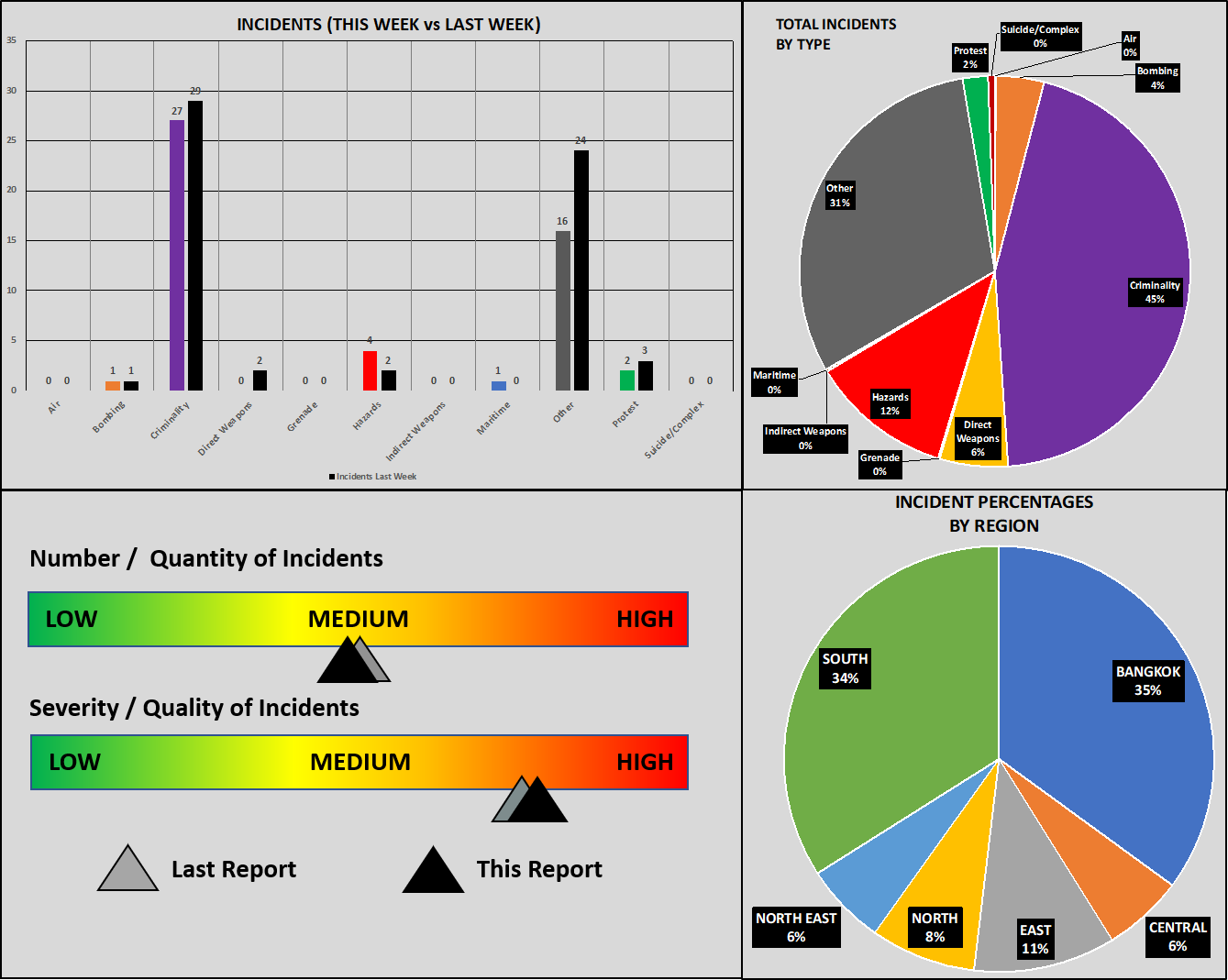 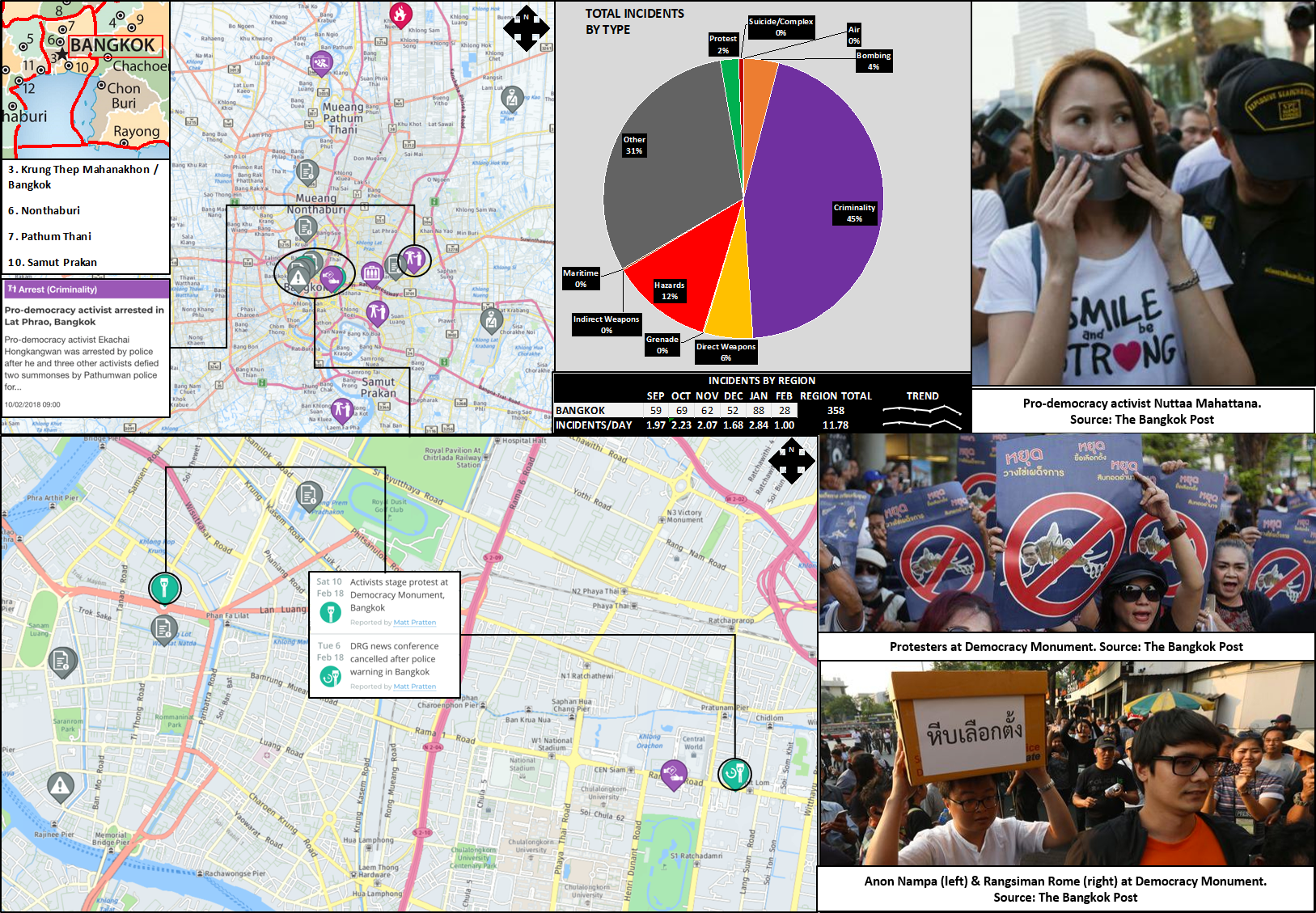 Bangkok continues as the area of highest activity. Unlike last week, there has been a dramatic turnaround in the levels of activity. Incidents relating to Crime have overtaken ‘Other’ incidents which made up the majority of incidents last week. Of note, the Thai government appears to have been focussed on the upcoming COBRA GOLD 2018 military exercises comprising of the US military – with the Chairman of the US Joint Chiefs of Staff General Joseph Dunford visiting Bangkok this week – the RTAF, ASEAN neighbours and small contributions from nations from the wider APAC region. During this period, there has been almost an absence in reporting on developments surrounding the election from the NCPO or NLA. However, there have been further protests from activists.

There have been three incidents this week that followed on from the protests led by Rangsiman Rome and Sirawich “Ja New” Seritiwat in Pathumwan. Following the protests, police issued summons for several activists to face charges of violating the bans on public gatherings. The summons have been largely ignored by the activists and has since seen the following occur:

06 FEB 2018: Activists from the DRG had planned to hold a news conference at the Maneeya Centre in Bangkok to call on the junta to keep its promise of an election this year, but police issued a warning that stopped the event from going ahead. The meeting was led by Nuttaa Mahattana, a television reporter and activist, who spoke to Thai and foreign reporters gathered outside the building. Nuttaa Mahattana is among activists from the DRG who have been summoned by police to face charges of defying a ban on public gatherings after organising a protest last month demanding that the junta not postpone a general election that is scheduled for this year. 10 FEB 2018: Pro-democracy activist Ekachai Hongkangwan was arrested by police after he and three other activists – Rangsiman Rome, Sirawit Serithiwat, and lawyer Anon Nampa – defied two summonses by Pathumwan police. Ekachai was taken from his home by the police to Lat Phrao police station before being escorted to Pathumwan police for acknowledgement of charges in connection with last week’s gathering at Pathumwan intersection’s skywalk to call for an election. The arrest came just hours before the pro-democracy activists planned another gathering at the Democracy Monument later that day. Pathunwan police said the three other activists would be arrested upon court’s warrants if they showed up at the gathering. 10 FEB 2018: Rangsiman Rome, Sirawit Serithiwat and Anon Nampa carried out their intent to hold a rally at the Democracy Monument following the arrest of Ekachai Hongkangwan. Leading an estimated 300 people at Democracy Monument, they were arrested by police executing the warrants issued for their arrest after the protest they led last week (Pratten et al., 2018).

COMMENT. While protests in Thailand have had a history of becoming violent, these demonstrations were attended by police quickly. Furthermore, available reporting at this time indicates there was no presence of anyone linked to the PAD, PDRC or UDD at the demonstration. Furthermore, a report currently being drafted on protest groups in Thailand indicates activist groups such as the DRG and the PGN currently conducting a protest march to Khon Kaen province do not have the capability to cause massive unrest that has been seen from the PAD, PDRC and UDD. With the arrests of Rangsiman Rome, Sirawit Serithiwat, Anon Nampa and Ekachai Hongkangwan, the capability of this group appears to have lessened.

The conduct of the protests – despite the warnings and arrest warrants – indicates that the DRG and other activist groups are willing to defy the NCPO’s bans on political activities. Such defiance will no doubt receive increased police efforts to arrest activists who have warrants issued for their arrest. COMMENT ENDS. 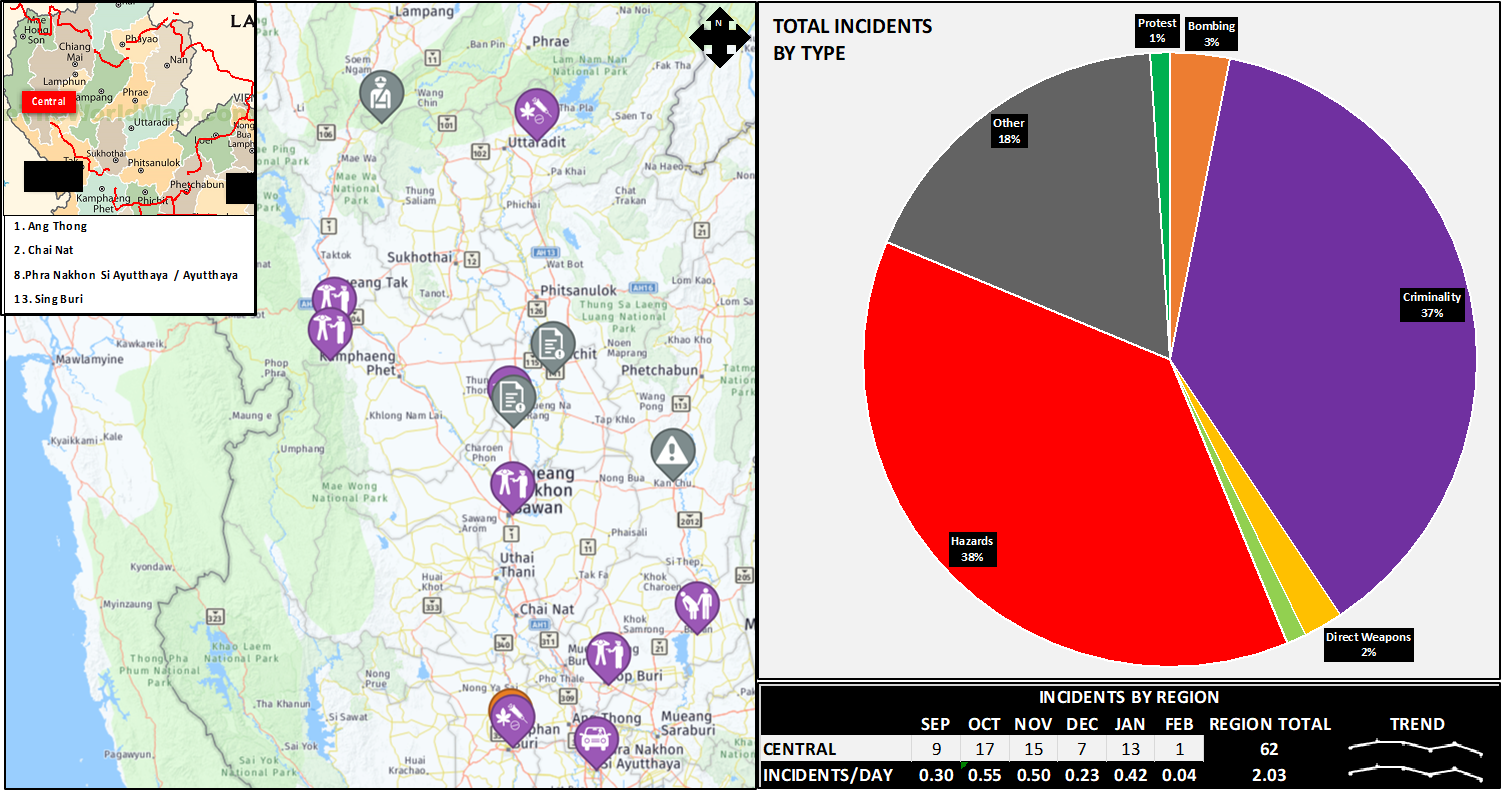 The Central reporting region has long had the lowest levels of activity across the country. Over the last 6 months, incident averages have not even reached 1 incident/day. While January saw an increase in activity compared to December, there has been little activity in this area since it was last monitored in 2017.

Its location between the North, North-East and Bangkok makes it a thoroughfare for the drug trafficking which occurs in its surrounding regions. Despite it being in the middle of these regions, there are few arrests made in the Central reporting region when compared to its surrounds; indicating that Thai authorities focus on the entry points for drug traffickers into Thailand and Bangkok where nearly all drugs trafficked into the country are sent for sale and wider distribution to the south. Between May-August last year, the lower parts of the Central reporting region served as a redistribution point for traffickers; predominantly in Ayutthaya. However this appears to have subsided since then due to numerous arrests (PRATTEN M. McCabe, et al., 2017; McCabe and Harrington, 2018).

While Crime takes up a large portion of activity in this part of Thailand, the other frequently occurring incident is Hazards which predominantly consist of floods and incidents associated with the damage caused. This stems from the Central region being a flood plain with the Chao Phraya River as the main water source and is surrounded by mountains and plateaus to the West, North and East; providing drainage to these areas. These flood conditions are caused by the wet season from mid-May to September/October. The wet season in Thailand features heavy rain from cyclones originating from the South China Sea to the East of Thailand and low-pressure weather systems originating from the Andaman Sea in the West (PRATTEN M McCabe, et al., 2017).

COMMENT. It is currently the dry season in Thailand, thus there is an absence of floods at this time. The absence of this incident would be the reason for the low levels of activity currently occurring in this part of the country. COMMENT ENDS. 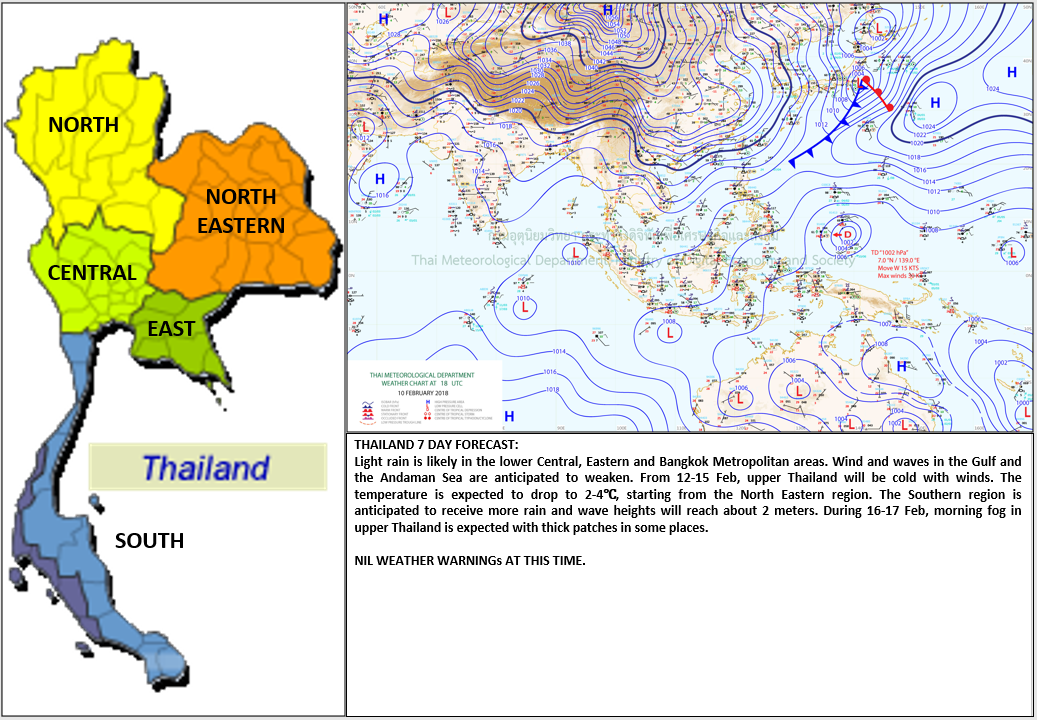 Overall, Thailand’s situation remains at MEDIUM-HIGH for the time being. However, the arrests carried out against DRG activists defying current bans despite warnings from police indicates that Thai authorities will POSSIBLY increase efforts to arrest other activists who have warrants issued from now on. If this occurs, it is PROBABLE the protests which have been occurring will cease in Bangkok due to an absence of activists who will be willing and able to organise further rallies. If the protests cease, it is POSSIBLE the overall situation in Thailand will begin to reduce to MEDIUM.

Around the rest of the country, the status quo appears to be continuing. The Central reporting region will PROBABLY continue to be the region of lowest activity but will no doubt have occasional incidents relating to Crime. It is PROBABLE that levels of activity will increase once the wet season begins in Thailand. When this happens, this region will see floods increase and damage associated with them. Activity across the rest of the country appears to be occurring as per usual as well.