THAILAND SUPINTREP: WILL AN ELECTION OCCUR?

Author’s Note:This is my final report as an Intern for Intelligence Fusion. Unfortunately, I have to call time on monitoring Thailand and wrap things up. I’d like to take this opportunity to thank all of you who have read these reports and provided feedback; it has been greatly appreciated and made my work during this internship all the more rewarding.

The actions by the NLA and the PM’s decision to delay the election after a promised date – again – make it POSSIBLE there will not be an election in February 2019 either; POTENTIALLY not at all.

Given Thailand’s history of political turmoil which has been occurring since 2006, the increasing amount of protests by the DRG, their future intentions and the intentions of other, unrelated groups to carry out protests are PROBABLY providing PM Chan-o-cha and the NCPO with justification to continue to delay the elections

Prior to the above developments, reporting began to emerge in mid-January 2018 that Thailand’s NLA would delay enforcement of the Organic Act on the Election of MPs; which it did later that same month. Furthermore, the same body in February 2018 rejected all seven candidates for the Election Commission that would be necessary to oversee the next election. These developments cast doubts of there being a November 2018 election and fed into growing criticism of the NCPO led by PM Chan-o-cha moving to cling on to power (Pratten 2018a, 2018b, 2018c, 2018c).

Initially, it was assessed that such a scenario would be within the AO shown below. However, the above developments have made prior work redundant as the scenario for the IPB relied on an election to be underway or have occurred (Pratten 2018e; McCabe & Harrington 2018; Demetriadi 2018). COMMENT ENDS. 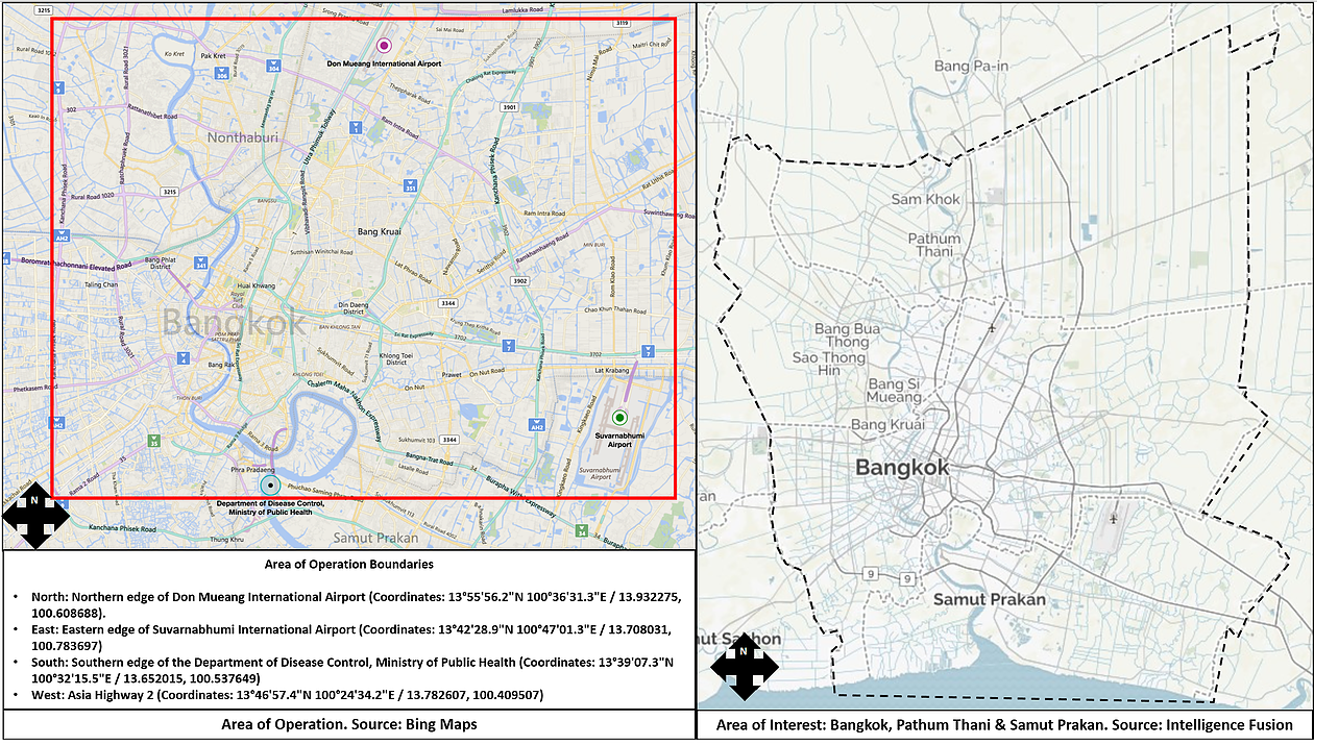 With the above in mind, it would appear to be necessary to take a step back and – rather than examine how unrest similar to previous years would unfold in Thailand – analyse the likelihood of an election actually occurring.

Established as the kingdom of Siam in the mid-14th century, modern Thailand came to be in 1939 after a bloodless revolution transformed the country into a constitutional monarchy. While it was heavily impacted by the Asia Financial Crisis in the 1990’s, it wasn’t until after 2005 when Thailand began to experience several rounds of political turmoil including a military coup in 2006 that ousted then Prime Minister Thaksin Shinawatra (Central Intelligence Agency 2018). Thaksin’s emergence into Thai politics had a polarising effect; enormously popular among the rural poor but deeply unpopular among many of Bangkok’s traditional elite. He was ousted in a military coup in September 2006, accused of corruption and abuse of power and has since been in self-imposed exile (BBC World 2011).

Ever since the ousting of Thaksin, Thailand has switched between democratic and dictatorial rule. The schism in the population between supporters of Thaksin and supporters of Thailand’s traditional ruling structures has seen protest groups against the then government of the day carry out activities which have become destabilising and violent, resulting in the King intervening; often through dismissing the government to hold an election or ordering the military to take over. The major groups responsible have been the UDD/’Red Shirts,’ the PAD/’Yellow Shirts’ and the anti-Yingluck Shinawatra movement called the PDRC. These groups have over the years have caused significant unrest through staging sit-ins at Government Offices, Airports and violent street protests which have seen heavy-handed crackdowns due to the actions of these groups effectively shutting down the country (Pratten 2017).

The latest of these rounds of political unrest was the events leading to the May 2014 coup. Thaksin’s youngest sister, Yingluck Shinawatra, led the Pheu Thai Party to an electoral win in 2011 and assumed control of the government. However, a blanket amnesty bill for individuals involved in street protests, altered at the last minute to include all political crimes – including all convictions against her older brother Thaksin – as well as an economically damaging and corruption plagued rice-pledging scheme triggered months of large-scale anti-government protests in Bangkok beginning in November 2013 (BBC World 2011, 2018; McCabe & Harrington 2018; Central Intelligence Agency 2018). In early May 2014, Yingluck was removed from office by the Constitutional Court and in late May 2014 the Royal Thai Army, led by Army General Prayuth Chan-o-cha, staged a coup against the caretaker government and later appointed Prime Minister in August 2014. The interim military government he leads today – the NCPO – has since created several interim institutions to promote reform and drafted a new constitution, which was passed in a national referendum in August 2016. Among these reforms were – citing the need to restore order – a ban on political activities and gatherings of 5 or more people (Central Intelligence Agency 2018; McCabe & Harrington 2018).

COMMENT. The new constitution – the 20th Constitution to have been written for Thailand – provided fresh powers for Thailand’s military as well as the King. It has been pointed out by political commentators the new constitution increases the military’s involvement in politics with the introduction of an appointed rather than elected senate and forcing any future government to adhere to the 20-year development plan finalised by the NCPO last year (Demetriadi 2018; Office of the United Nations Resident Coordinator in Thailand 2016). COMMENT ENDS.

While there has been much criticism of the NCPO from overseas commentators since it took power, since mid-January 2018; there has been an increased willingness by activists to carry out protests against the NCPO and call for elections as well as groups willing to protest about separate issues. Chief among the election related protests have been the actions of the DRG. While the DRG’s leaders have been arrested and charged on multiple occasions for violating the ban on political activities, the group has continued to carry out protests at Thammasat University’s Rangsit Campus in Pathum Thani as well as at Democracy Monument in Bangkok. Furthermore, the DRG has even released a schedule for future protests to call for elections to be held this year (Pratten 2018f). So far, this schedule consists of:

As for other groups who have been staging protests, their grievances have been in relation to economic and environmental issues. These groups have shown an increasing willingness to stage protests outside of Government House or other noticeable places in Bangkok. Common occurrences of these kinds of protests have been the actions of environmental activists protesting against the construction of coal-fired power plants in the Deep South of Thailand. 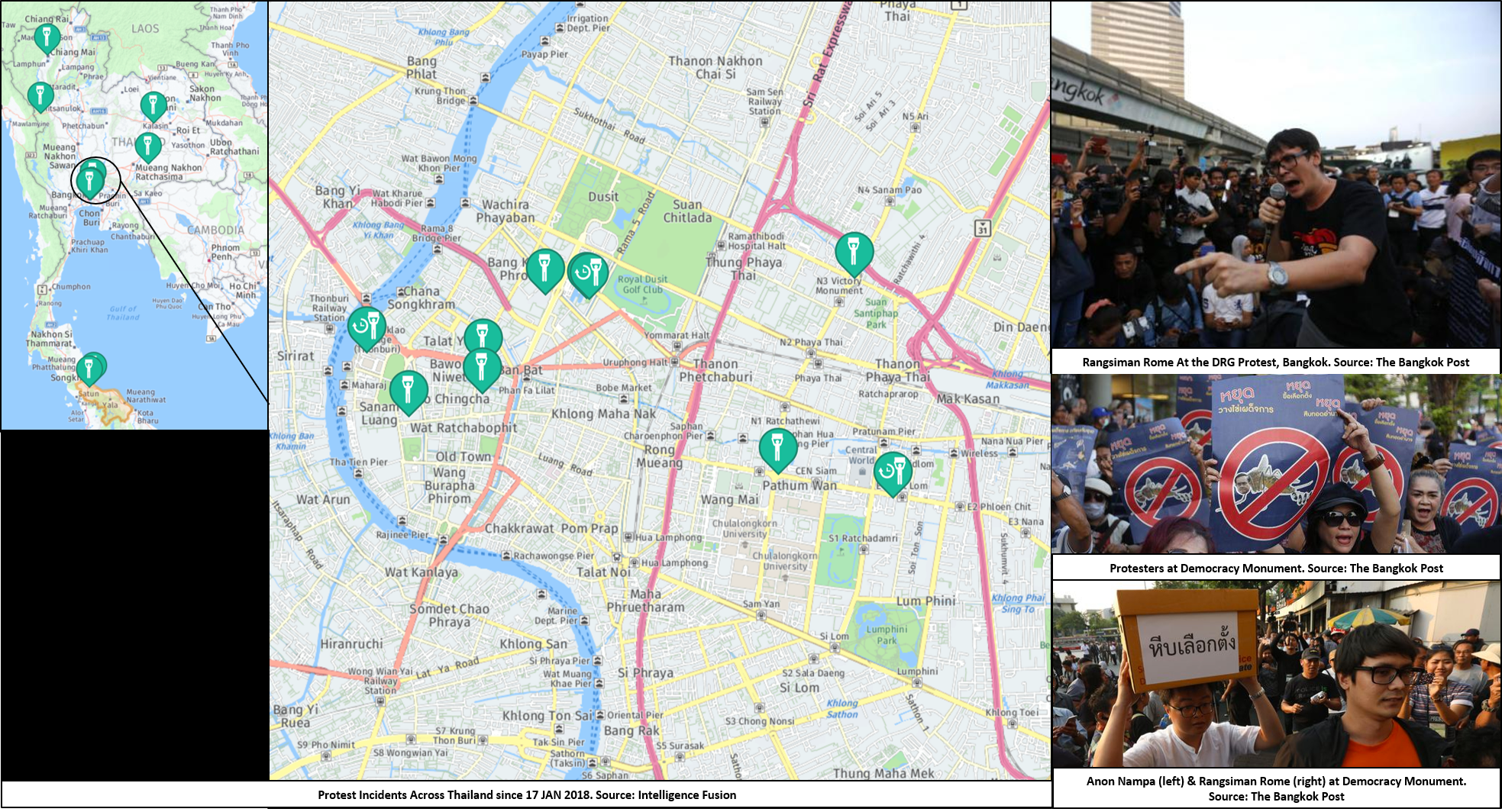 COMMENT. All of these demonstrations have been peaceful with little similarity to the violent unrest caused by the UDD, PAD or PDRC between 2006 and 2014. Furthermore, there has been little in the way of involvement of members from these groups according to logged incidents. However, there have been several incidents of ‘Statements/Threat – Other’ where the PM has made several remarks about the progress towards the election. A recurring theme among them has been concerns about stability, order and the need for responsible conduct by citizens (McCabe & Harrington 2018). During his most recent announcement of delaying the election to February next year, available reporting indicates the next election will need to consider the situation at the time. PM Chan-o-cha was quoted, “I’m not making threats, but if everyone keeps coming out, we’ll see…. Once we unlock the ban on politics, what will happen? I hope good things will happen, that people will campaign in peace without throwing around accusations or insinuations so that elections can take place (Associated Press 2018).”

Regardless of whether PM Chan-o-cha and/or the NCPO had any involvement or influence in the NLA’s recent decisions surrounding the Organic act on MPs and the decision to reject all seven Election Commission candidates, the reactions by the DRG and intentions of other groups – while they have little in common with past actions by the UDD, PAD and PDRC – would nonetheless provide the PM and the NCPO with justification to have delayed the election again. Additionally, the conduct of future protests- peaceful or otherwise – may provide continued justification to have delayed the election again and may even provide justification for further delays. COMMENT ENDS.

While preparations have begun for new political parties to register to contest an election, the actions by the NLA and the PM’s decision to delay the election after a promised date – again – make it POSSIBLE there will not be an election in February 2019 either; POTENTIALLY not at all.

Given Thailand’s history of political turmoil which has been occurring since 2006, the increasing amount of protests by the DRG, their future intentions and the intentions of other, unrelated groups to carry out protests are PROBABLY providing PM Chan-o-cha and the NCPO with justification to continue to delay the elections regardless of how these protests are carried out and regardless of what the NLA decides to do in the future.

Further indicators of the above materialising will occur from now until the anniversary of the 2014 coup in May. Each protest carried out by any group in Bangkok – and POTENTIALLY in other parts of the country – will POSSIBLY begin to be used as examples of accusations and insinuations being thrown around as described by PM Chan-o-cha. After May 2018, any future protests being carried out will PROBABLY play into the NCPO’s and PM Chan-o-cha’s hands; providing them with an ongoing advantage and increase their chances of maintaining power in Thailand. 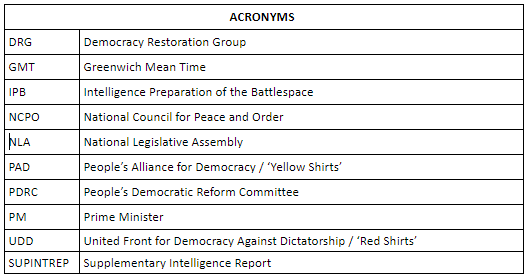 Associated Press 2018, ‘Election Next Year For Sure Unless Not, Prayuth Says’, Khaosod English, retrieved March 5, 2018, from <http://www.khaosodenglish.com/featured/2018/02/27/elections-next-year-sure-unless-not-prayuth-says/>.

Charuvastra, T 2017, ‘No Really, There Will Be Elections This Year, Prawit Says’, Khaosod English, retrieved February 28, 2018, from <http://www.khaosodenglish.com/politics/2017/01/05/no-really-will-elections-year-prawit-says/>.