With an election anticipated in Thailand in the later part of 2018, the chances of Thailand experiencing a repeat of political unrest culminating in violent protests, crackdowns by authorities and governments subsequently removed by either fresh elections or military coups increases. This ‘ground hog day’ scenario that has been a feature of Thailand since 2006 means that in the lead up to an election, the election itself or afterwards will mean that there are chances of protests occurring which will escalate into violence (Demetriadi, 2017).

This four-part intelligence product aims to look at how such a situation could play out in Thailand through an Intelligence Preparation of the Battlespace (IPB). Although this kind of product is historically applied within Western Military Intelligence formations, its structure and analysis can be applied towards analysing how political unrest could unfold in Thailand. This IPB will be structured along four steps:

This first part of the IPB aims to define a set geographic area to be analysed – the Area of Operation (AO) – as well as identifying areas which can impact it but are outside of direct control – the Area of Interest (AI). While in this case, the AO and AI would not necessarily be defined by set a set geographic area, this method nonetheless provides effective guidelines to focus analytical effort. 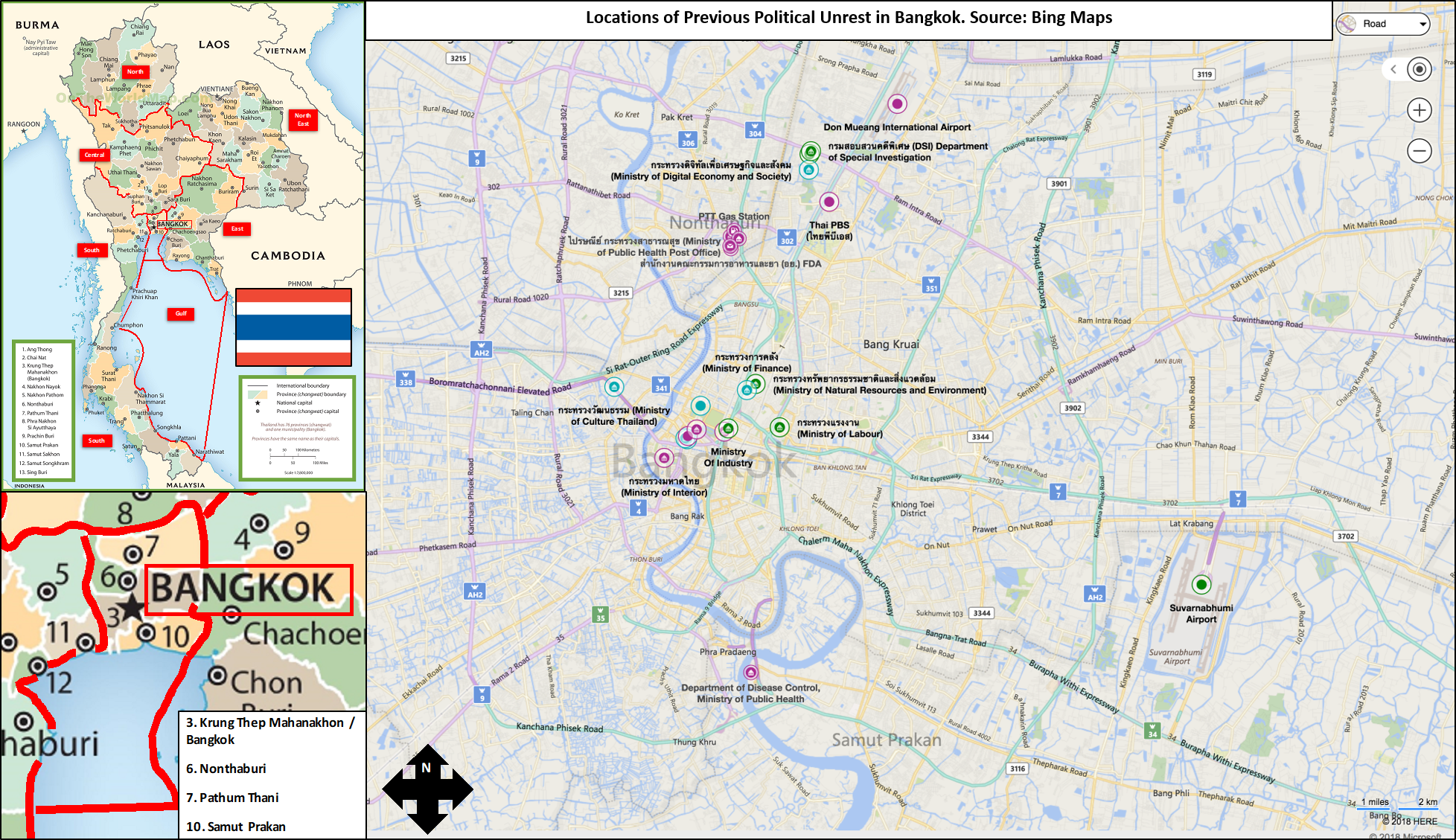 Prior periods of unrest in Thailand since 2006 have focussed on protest groups occupying government buildings or key infrastructure within Thailand’s capital; Bangkok. Past examples have included the PAD occupations of both Don Mueang and Suvarnabhumi International Airports, Government House, Government Ministries or blocking major roads within the city (Hodal, 2014, Lefevre et al., 2013a, Lefevre et al., 2013b, PRATTEN 2017, The Bangkok Post, 2013b, The Bangkok Post, 2013a). While the imagery above does not show an exhaustive list of prior locations of unrest, the majority of these locations are focussed within Bangkok itself – otherwise known as Krung Thep Maha Nakhon – or just to the South-East in neighbouring Samut Prakan in the case of Suvarnabhumi Airport.

When looking at the key characteristics of this part of Thailand, it consists of dense urban terrain; numerous roads of varying size are found throughout the city with bridges crossing the Chao Phraya river which dissects it from North to South. As the capital of the country, Bangkok is the centre of power for the country’s Political, Military, Economic, Social, Infrastructure and Informational spheres (McCabe and Harrington, 2017, Central Intelligence Agency, 2016).

COMMENT. Based on the above, the locations appear to be clustered within Don Mueang Airport to the North – which is also just on the border with Pathum Thani, Suvarnabhumi Airport to the East, Ministry of Public Health’s Department of Disease Control to the South and Asia Highway 2 to the West. While the above locations do not provide an exhaustive list, this area would provide the best guide for where any unrest will be focussed (Bing Maps, 2018, Intelligence Fusion, 2017). COMMENT ENDS.

Based on the above, the AO would be best defined as the boundaries mentioned in the comment above and depicted in the imagery below, with the AI covering the rest of the Bangkok Reporting Region used in Weekly Intelligence Reports – without going further south of the shoreline. The boundaries are set by the following locations and where their Latitudes/Longitudes intersect: 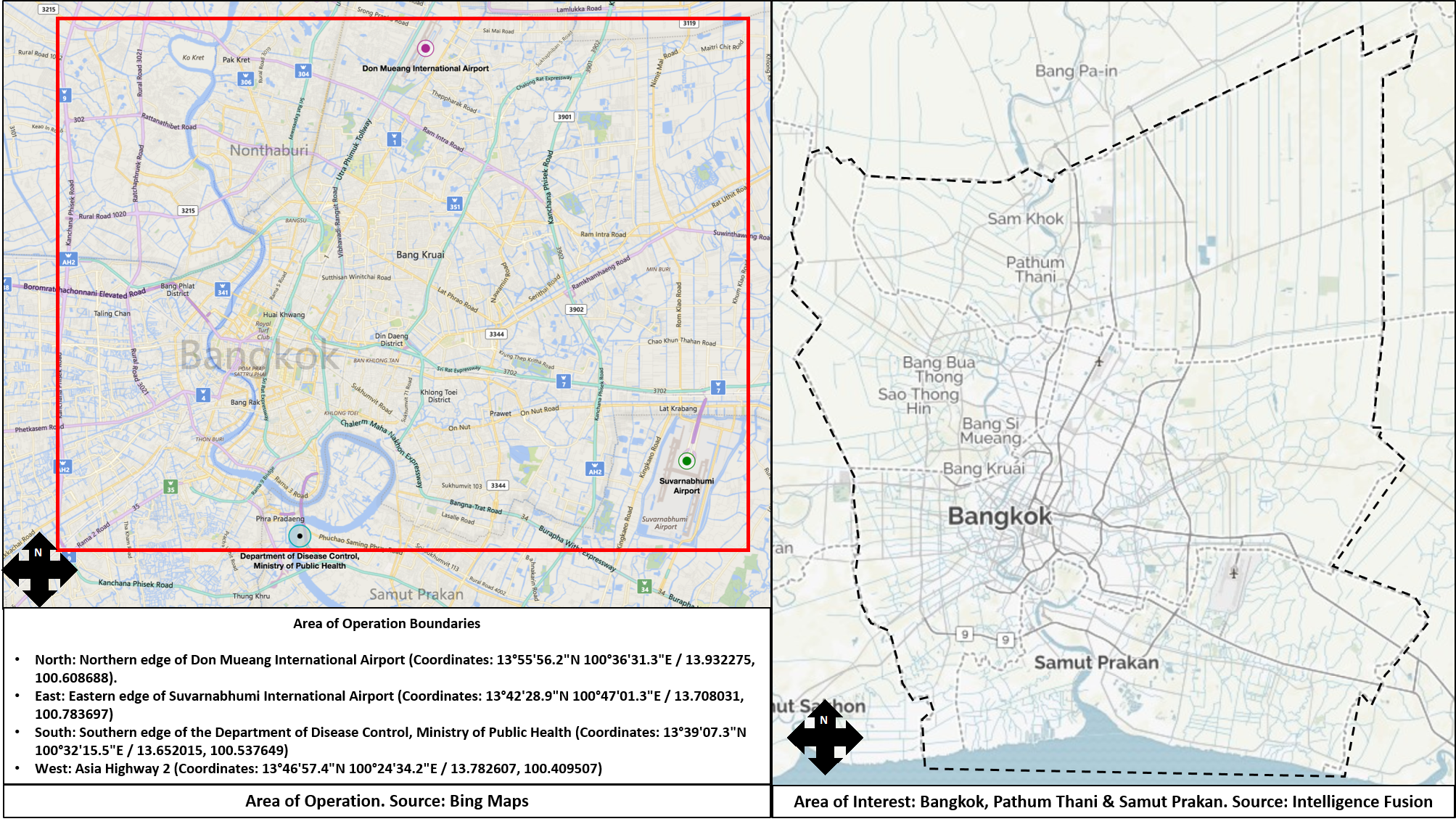 From this point, the IPB will progress to analyse the Battlespace Effects within this AO. This next step will be compiled and made available as soon as possible.