Topic: Political Information
EXECUTIVE SUMMARY
Prime Minister Chan-o-chaâs recent visit to President Trump represents only a POTENTIAL return of friendly, public ties as this seems to be the only change in US-Thai relations since 2014. Making it POSSIBLE that this visitâs importance has been exaggerated. However, the US has PROBABLY taken Thailandâs increase in ties with China as intended by Thailand; not to take it for granted as its location in South-East Asia makes it a country of interest to several countries throughout the Asia-Pacific region.
INTRODUCTION
From 02-04 OCT 2017, Prime Minster (PM) General Prayut Chan-o-cha led a Thai delegation on a visit to the White House; with the PM meeting US President Donald Trump on 03 OCT 2017. Media reports used to log the event on the Intelligence Fusion platform indicated the purpose of the visit was to discuss ways to strengthen and broaden bilateral relations and enhance cooperation; specifically on the topics of bilateral security, economic cooperation, trade and investment (McCabe and Harrington, 2017). This visit by the PM to Washington was initiated President Trump inviting the PM earlier this year and occurred after a visit by Thailand by US Secretary of State Rex Tillerson on 05 AUG 2017 along with recent efforts by the PM to encourage greater foreign direct investment from the US in its Eastern Economic Corridor infrastructure development projects (PRATTEN 2017b). 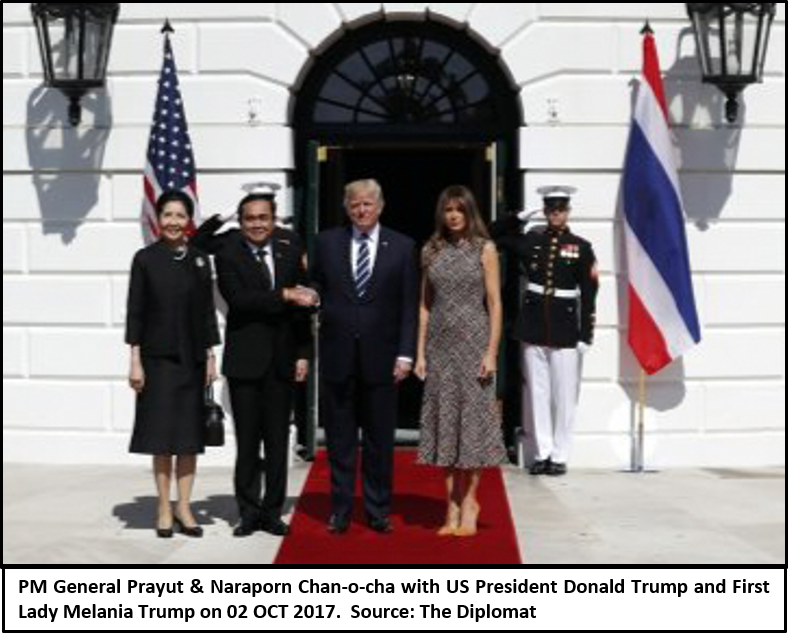 The joint statement by the two leaders indicated they share the view that the long friendship and close cooperation which has existed between the two countries for almost 200 years and constitutes a firm foundation for further strengthening of ties. The two affirmed a strong and thriving alliance is underpinned by shared interests and common values with a shared vision of a stronger alliance for common security, closer economic ties for common prosperity, and growing social ties (The White House Press Office, 2017). The joint statement would make it appear that ties between the two nations are strong and grounded.
However, other media reporting has indicated this was a normalisation, an upgrade or even a major thawing of ties between the two countries since General Prayut Chan-o-cha led a military coup in 2014 ousting Yingluck Shinawatraâs government. Several Thai media articles on this visit claimed that since the 2014 coup, US-Thai relations had become strained or even frozen (The Bangkok Post, 2017, Associated Free Press, 2017, Parameswaran, 2017, Reuters, 2017).
This snapshot is intended to analyse this visit to the White House. Through briefly looking at the history of the Thai-US relationship, Thailandâs geopolitical significance and relations between the US and Thailand after the May 2014 Coup, it will assess what kind of impact this visit will have on relations between the two countries and what this could mean for Thailand.
The History of The Thai-US Relationship
Diplomatic relations between the US and Thailand (at the time Siam) can be traced as far back as 1833 with President Andrew Jacksonâs setting up of the first US foreign mission in Asia and his gift of a sword with an eagle representing America and an elephant representing Siam carved into the handle. This set up of the first US foreign mission in Asia came to be regarded as the âelephant and the eagle (Chongkittavorn, 2017).â
Thailandâs Geopolitical Significance
While Thailand is of the oldest American allies in South-East Asia â if not the oldest â Thai foreign policy over the years has been one of a balancing act. Its foreign policy interests have been focussed on having strong relations with all major global powers, in effect it has long been playing great powers against each other (The Bangkok Post, 2017, Parameswaran, 2015). When examining the imagery below, this does not come as a surprise. Its location in the South-East Asian region makes it a thoroughfare for overland access to and from the East, South and South-East Asian sub-regions as well as Australia and Pacific Island countries (Bing Maps, 2017). Its location in the world makes it a bridge between the Asia-Pacificâs sub-regions; its southern neighbour Malaysia appears to have similar significance based on its location. 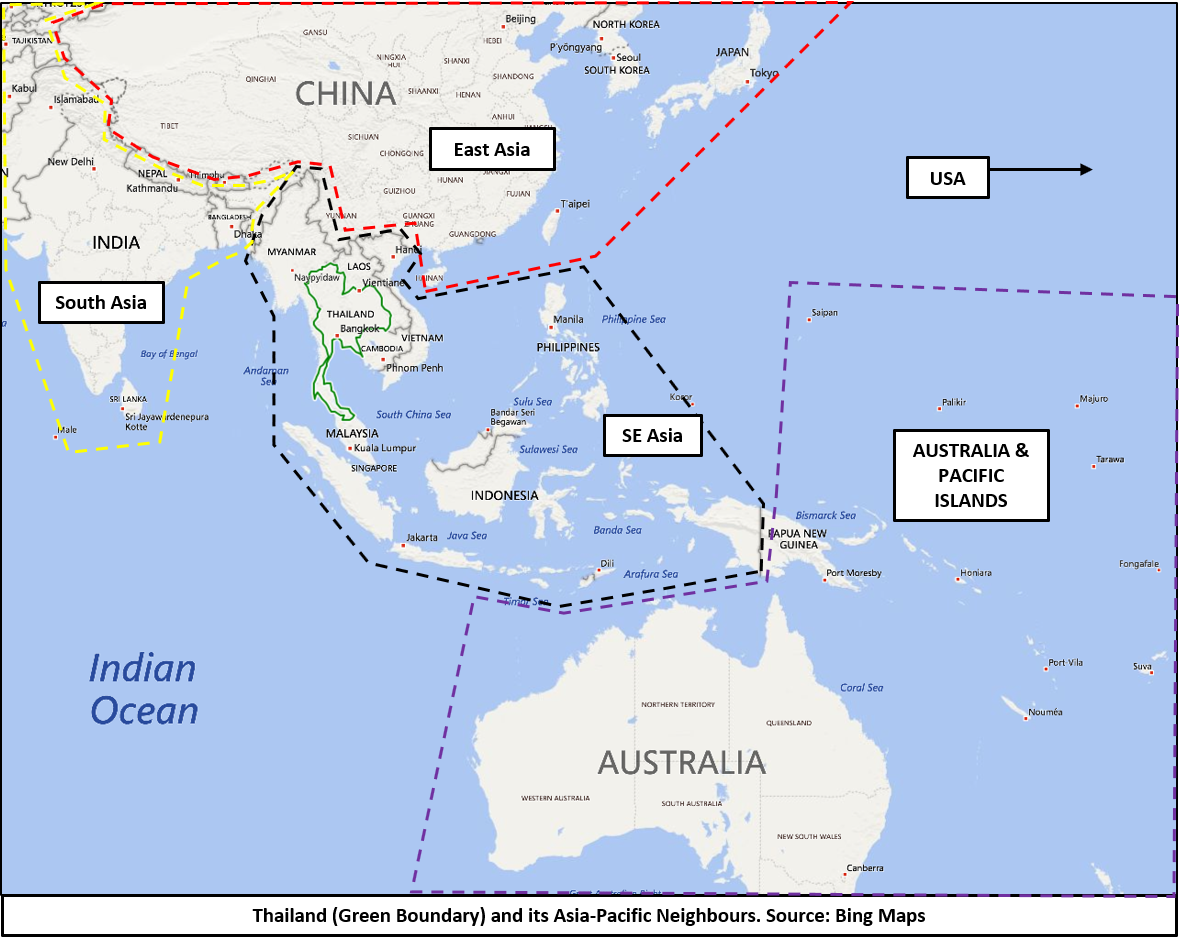 Relations After the 2014 Coup
On 22 May 2014, the Royal Thai Armed Forces led by General Prayut Chan-o-cha ousted the elected civilian government led by Prime Minister Yingluck Shinawatra after six months of disruptive political protests and installed a military junta â officially known as the National Council for Peace and order (NCPO) â with General Prayut as PM. The political unrest which influenced the coup in 2014 was the latest since the last coup in 2006 â overthrowing Yingluckâs brother Thaksin Shinawatra; a divisive yet popular figure at the polls but had drawn the ire of the countryâs traditional elite and urban middle class â when the actions of the Red and Yellow Shirts drove crisis after crisis in Thai politics (PRATTEN 2017a).
The coup saw relations between Thailand and the United States as well as the European Union â as claimed by available media reports â take a turn for the worse. As a reaction to the coup, the then Obama administration curtailed dealings with non-democratic regimes; committing to restoring full relations until Thailand returned to democratic rule (The Bangkok Post, 2017, Associated Free Press, 2017).
Among many examples, the most used example of those claiming reduced ties between the NCPO and the Obama Administration were the changes in the US suspending some of its military aid to Thailand. This included US$4.7 million in Foreign Military Financing and International Military Education and Training as well as cutting high-level military exchanges. While the changes were big â especially given the Obama Administrationâs strategy of pivoting towards Asia â they did not completely stop; arms sales to Thailand continued on a case-by-case basis. In addition, large scale military exercises â such as the multilateral exercise named COBRA GOLD hosted by Thailand and the bilateral Cooperation Afloat Readiness and Training (CARAT) exercise â were carried out on a smaller scale. Alongside these changes came changes in public discourse between the two countries. Of particular note was the public remarks of U.S. Assistant Secretary of State for East Asian and Pacific Affairs Daniel Russel on 28 JAN 2015; his calling for the end of martial law and removal of restrictions on civil liberties received a stinging rebuke from PM Chan-o-cha (Parameswaran, 2015).
With the reduced military cooperation and public appearance of animosity came an increase in interest from China; an interest that Thailand happily accommodated. Determined to make the most of the opportunity, the Chinese sold 3 Submarines that included military technology transfer and training, 38 VT-4 Main Battle Tanks â pictured below â of which 28 recently arrived in Saraburi province and has also been involved in the NCPOâs efforts to improve rail infrastructure with its recent signing of contracts to develop a high-speed rail line from Bangkok to Nakhon Ratchasima province to the North-East (PRATTEN 2017b, Malyasov, 2017, Parameswaran, 2015, Parameswaran, 2017, McCabe and Harrington, 2017).

(Click on above image to expand)
COMMENT. The increase in ties between Thailand and China was a marked change in its foreign policy. It would appear to be quite contrary to its preference of not aligning with any powerful country but balancing positive relations with as many great powers as possible.
Also important to keep in mind is that while the relationship between the US and Thailand appeared to be strained in the public eye, representatives from both countries continued to meet in private and make the effort to improve relations between the two, especially in the economic sphere where Thailand went to great lengths to improve its access to US markets and increase foreign domestic investment from the US. Parameswaranâs (2015) analysis on these interactions were the NCPOâs intent was to tell the US not to take it for granted. COMMENT ENDS.
ASSESSMENT