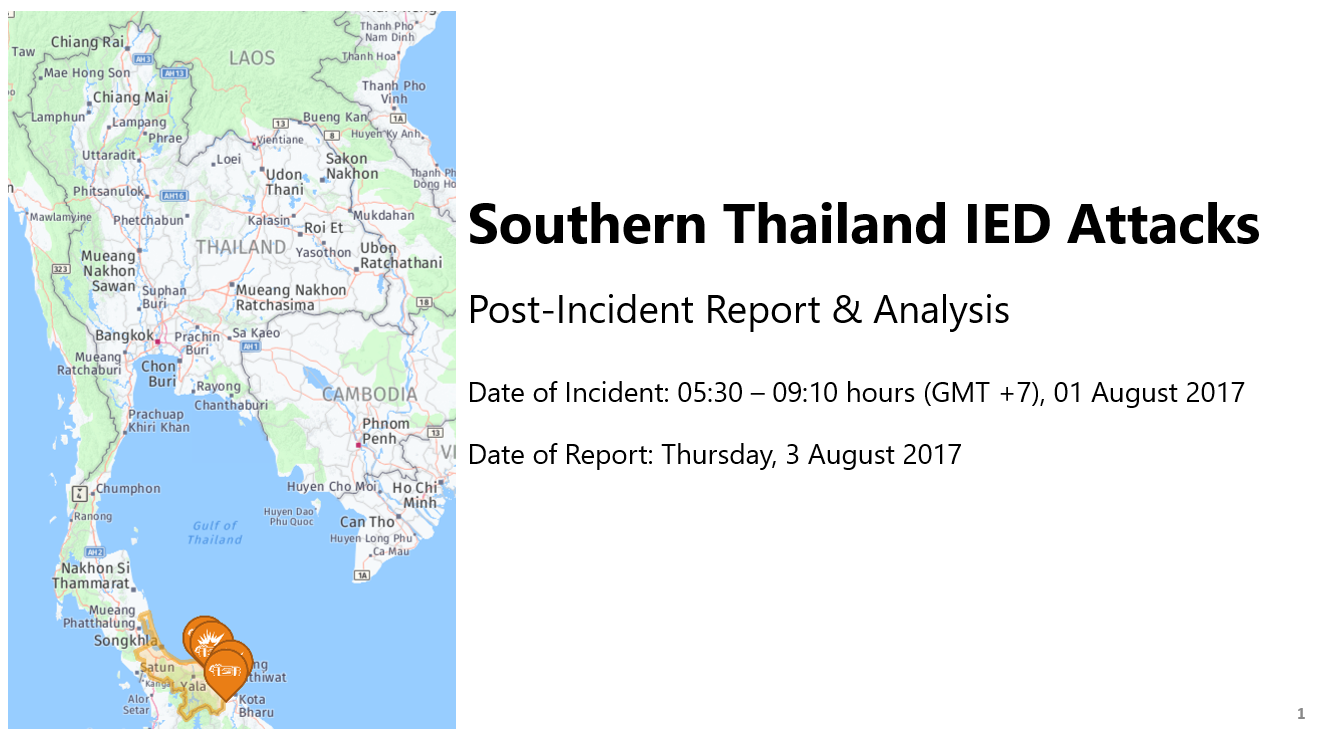 INCIDENT SUMMARY
As shown in the map below, four improvised explosive device (IED) attacks occurred in the Southern Thailand Provinces of Narathiwat & Pattani within four hours of each other. Details of each incident are:
1. 05:30, 01 AUG 17, SUNGAI KOLOK – An IED explosion occurred at the Bunnapal intersection on a bypass around Sungai Kolok district town. Two motorcycle bombs were parked at the intersection at about 05:30 and one of them exploded approximately 10 minutes later, no casualties were caused. Police were dispatched to the scene and found the other motorcycle bomb, destroying it with a water cannon.
The first motorcycle was fitted with a bomb made of a steel box, weighing about 5kg.The second was fitted with a bomb made of a fire extinguisher tank, weighing about 20kg.
2. Time Unknown, 01 AUG 17, TAK BAI – A residential unit of Tak Bai territorial defence volunteers had a pipe bomb hurled at them in Tambon Koh Sathon in Tak Bai district.
3. 07:00, 01 AUG 17, MAYO – Police in Mayo district informed of a suspicious object left at a market in Mayo district. After being inspected by police and EOD officers, it was determined the object was only an empty box.
4. 09:10, 01 AUG 17, MAI KAEN – Two defence volunteers were killed and four injured when an IED exploded at a shelter they were resting in after providing security for teachers at the Ban Taloh Kraithong School in tambon Talo Kraithong.
Police assessed the explosive was stuffed in a steel pipe / fire extinguisher with a total weight of at between 10-25 kg. It was detonated remotely when the volunteers rested inside the shelter.The bomb blast left a 1.5 metre wide hole about a metre deep and investigators collected metal fragments and electronic parts from the scene. The IED had been buried beside the shelter was detonated with a remote control.
COMMENT. While these attacks all occurred on the same day, the timings between attack 1 and attack 3 are very close together in time â 1.5 hours â but their locations appear to be too far apart for one group to have carried out all these attacks. The distance and timings of these attacks would suggest at least two groups were behind these incidents.
Previous reporting has assessed two insurgent groups are currently active in Southern Thailand; one in Pattani, the other in Narathiwat. It remains unconfirmed at this point but the group in Pattani is assessed to be part of the Barisan Revolusi Nasional â BRN â while the Narathiwat group is assessed to be part of the Runda Kumpilan Kecil â RKK â (PRATTEN 2017b). COMMENT ENDS.
INITIAL ASSESSMENT: It is PROBABLE these attacks were carried out by both groups in their respective territories rather than one group. Given the timings of the attacks, they POTENTIALLY coordinated their attacks in order to cause the most amount of damage in as quick a timeframe as possible. 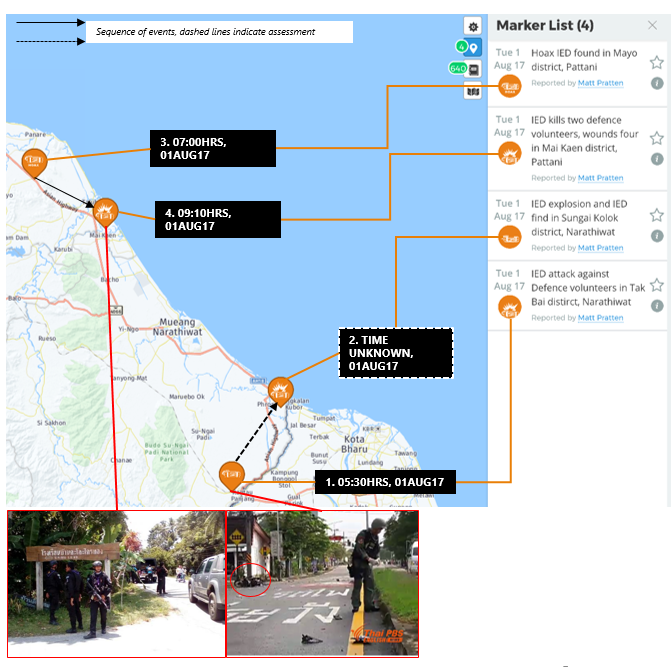 (Click on above image to expand)
COMMENTS & ASSESSMENTS â BY GROUP
PATTANI/BRN
Examination of these incidents in Pattani and examination of previous reporting have shown the following:
This group was behind the Big C Supercentre Bombing on May 09 2017.This group has shown an ability to conduct multiple attacks around Pattani province in a short space of time. With each incident, the time between attacks has shrunk . Their attacks on this occasion was their quickest to date. Based on previous reports and incidents, this group was assessed as being limited to carrying out attacks on weekends.Prior to now, this group has not conducted IED attacks since the same time that LAKMAN MADING was killed, nor has it carried out hoax IED attacks. After MADINGâs death, this group had conducted small arms fire attacks against teachers, a Thai Army base, civilians and Defence volunteers.Attacks against teachers consisted of roadside ambushes while attacks against defence volunteers consisted of two men on a motorcycle riding up to the victim, shooting them and making a quick getaway.Previous IED attacks by this group before MADINGâs death consisted of a main charge made from gas cylinders being packed with explosives; weighing between 20-30kg. One of their previous attacks was powerful enough to destroy a Thai Army transport vehicle and kill six soldiers.
ASSESSMENT:
This incident contradicts previous assessments on this group operating on weekends.
Given the type of attack, it is POSSIBLE this group has regained its ability to carry out IED attacks and will begin to utilise these attacks more, particularly against teachers and defence volunteers in the future.
The shorter timeframe on this occasion makes it PROBABLE that future attacks in PATTANI will consist of multiple attacks over a short space of time; between 2 â 24 hours depending on how many attacks they intend to carry out.
Considering previous incidents, it is POSSIBLE a future attack by this group will be a âComplex Attackâ over a large area. In Pattani, this group will POTENTIALLY carry out an IED attack on defence volunteers and or teachers with follow up attacks such as shooting more defence volunteers in public or attacking army bases while police are responding to the initial IED.
NARATHIWAT/RKK
Examination of these incidents in Narathiwat and examination of previous reporting have shown the following:
The use of motorcycles with explosives strapped to them and pipe bombs appear to be the favorite tactics of this group. They have carried out a number of these attacks in Narathiwat targeting police, successfully killing one policeman in Bacho district with a pipe bomb on 20 July 2017. Previous incidents of IEDs made with motorcycles have not caused any casualties. Previous reports do not indicate this group have targeted Defence volunteers before.In previous incidents using motorcyles for IEDs, this group have detonated the IED remotely, most likely by radio. The detonation of one motorcycle 10 minutes after departure would indicate this IED was detonated remotely too.This group is assessed to have been behind a complex attack that occurred last week which reportedly resulted in four individuals being detained.While the tactic has not been seen in Thailand as yet, a tactic in other insurgencies such as Northern Ireland, Afghanistan and Iraq has been used where an object has been placed near an IED or an action has been carried out to lure authorities to an IED and detonate it, increasing the chances of casualties. This is often referred to as a âcome on (shown below).â The use of two motorcylces with one detonating shortly after being parked would naturally gain attention and require a response from police.