Philippines
The first half of June has been dominated by the fighting in Marawi City between the Army and elements of the Maute Group and Abu Sayyaf Group which has been ongoing since May 23rd, when the Army attempted to capture Abu Sayyaf Group leader and designated leader of the Islamic State in South East Asia, Isnilon Hapilon. Heavy fighting led to the deaths of 13 Marines in Barangay Lilot Madaya on June 9th, while at the very beginning of June, an errant bombing run by the Air Force led to the deaths of 11 soldiers. On June 6th, authorities arrested the father of the Maute brothers (in charge in Marawi City) in Davao City, while three days later, the mother of the brothers was arrested in Masiu on the southern side of Lake Lanao.

Events in Marawi City. (Click on above image to expand).
While the clashes continue to unfold in Marawi City, there have been attempts by members of the Bangsamoro Islamic Freedom Fighters to hoist the âBlack Standardâ (flag of the Islamic State), in several locations in Maguindanao, yet were repelled by the Army at each attempt. Additionally, the Abu Sayyaf Group has continued to be active in the Sulu Archipelago, with a kidnapping of a 9-year old boy in Jolo, and a foiled attack by IED in Isabela City. Furthermore, the New Peopleâs Army has not completely halted its operations against the government initiating a skirmish north of Davao City earlier in the month. On June 2nd, a gunman opened fire in the Resorts World Manila Hotel and set fire to gambling tables causing a fire which killed 37 people and injured 50. The Islamic State claimed the attack as one of their own, but police say there are no links to terrorism and the suspect was a disgruntled gambler.

Incidents in Mindanao. (Click above image to expand).
Elsewhere in the country, there has continued to be a high number of arrests made related to drug users and pushers in Cebu City, Bacolod City, and Metro Manila. Vigilante killings continue at a high rate in Metro Manila, and shooting incidents in Isabela and Cagayan provinces has increased in comparison to recent months.

Incidents in northern Philippines show an increase in shooting incidents in Cagayan and Isabela Provinces. (Click on above image to expand).

Incidents in Metro Manila first half of June. (Click on above image to expand).
Indonesia
The first half of June in Indonesia has been marked by the events occurring in the southern Philippines. Due to its proximity and the fact that the country has several entry points due to its geography, the government and armed forces of Indonesia have reinforced their defenses on the islands closest to the Philippines. The Army announced that they will build a military base on Morotai Island, while reconnaissance aircraft, maritime patrol vessels, and more man power have been sent to North Maluku to assist in making sure militants from the Philippines do not enter the country. Elsewhere in the country, counter-terrorism operations have continued with Densus 88 arresting suspected terrorists in Gunungkidul and Bandung, with two of those arrested being linked to the east Jakarta bombing that occurred at the end of May. The counter-terrorism unit also raided a house in Garut regency believed to be a bomb assembly location.

Incidents in Indonesia first half of June. (Click on above image to expand).
Incidents in Jakarta have been dominated by two violent armed robberies which led to the deaths of a man who had just withdrawn money from the bank, and a woman who chased the robbers. Bomb victims were shot to death, and the crimes have led to a special police unit being put together to battle crime in west Jakarta. 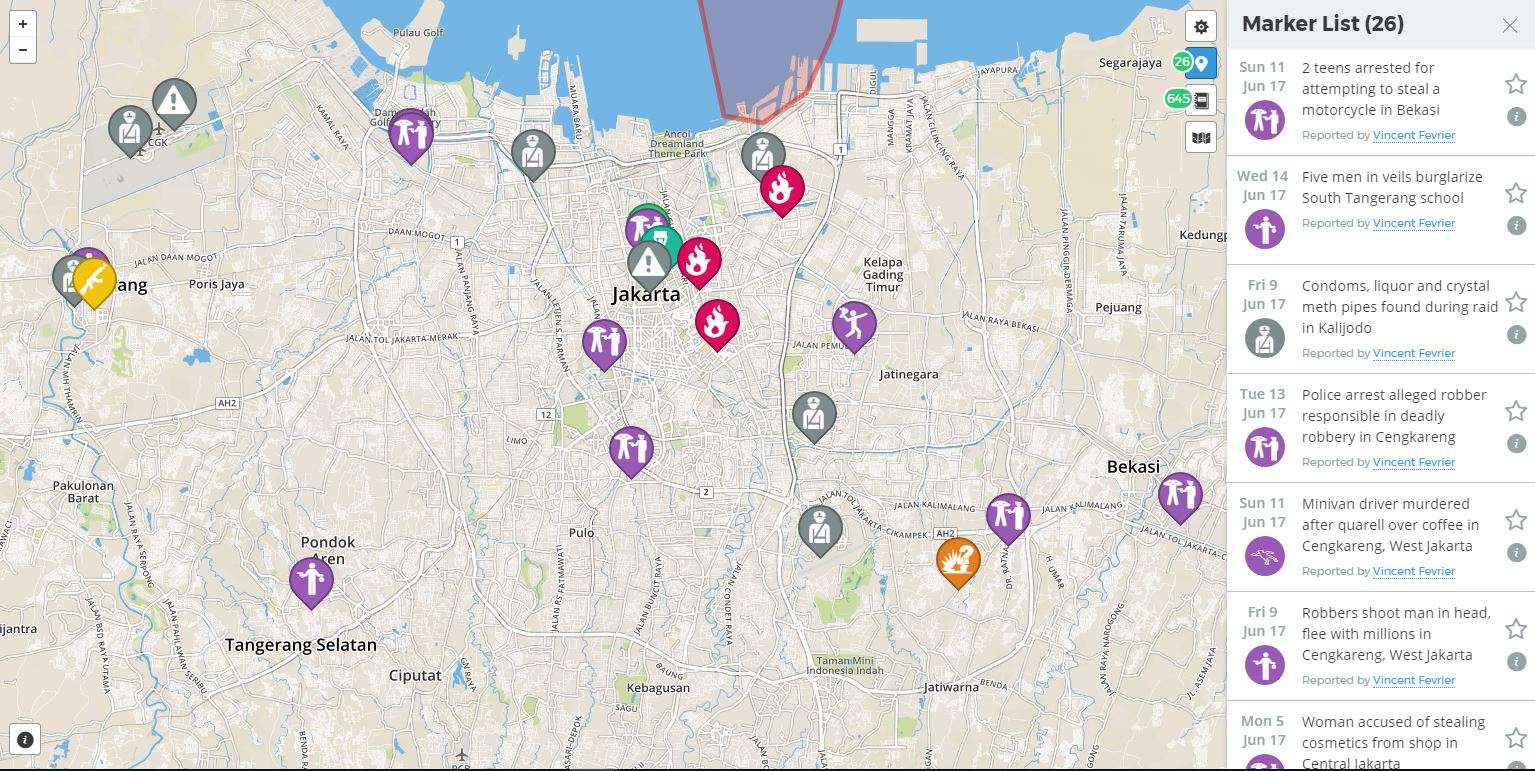 Incidents in Jakarta first half of June. (Click on above image to expand).
Malaysia
Like Indonesia, Malaysia has taken steps to bolster its security due to the ongoing security concerns affecting the southern Philippines. Additional security forces have been placed and given the resources needed to strengthen intelligence gathering and stop any militants from crossing into Sabah. In Slim Rover, counter-terrorism officials arrested an Indonesian man with links to ISIS plotting an attack against authorities. 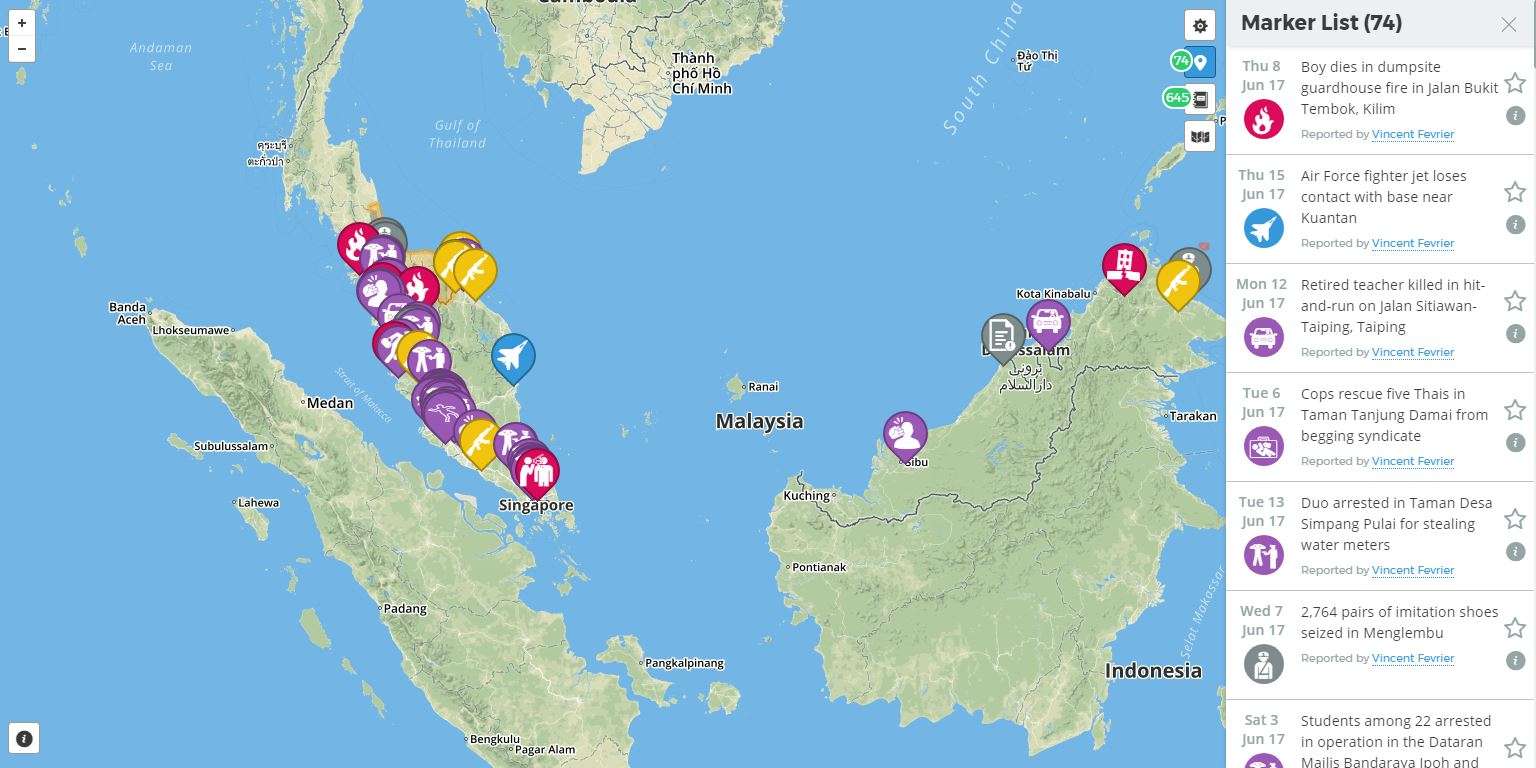 Incidents in Malaysia first half of June. (Click on above image to expand).
Elsewhere in the country, police have continued to investigate and arrest a number of people in relation to corruption, while also dealing with incidences of armed robbery, theft and sexual assault. In Kedah on the border with Thailand, there have been several seizures by the authorities in relation to smuggled goods, such as cigarettes, rice, and fireworks. 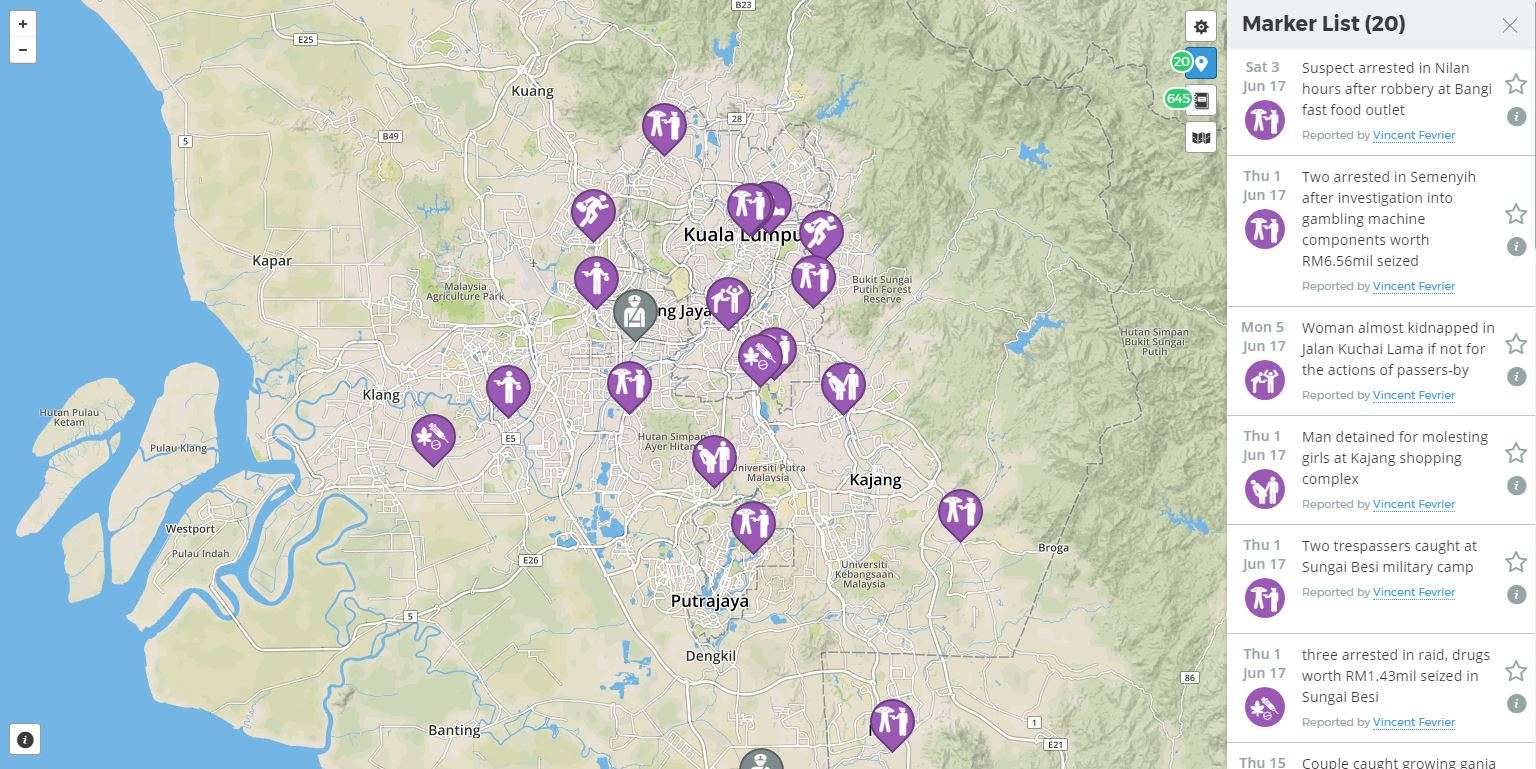 Incidents in Kuala Lumpur first half of June. (Click on above image to expand).
Cambodia
On June 4th, Cambodia held communal elections. Prior to the elections, Prime Minister Hun Sen of the Cambodian Peopleâs Party (CPP) had threatened civil war if his party did not come out on top. The main challenger to the CPP is the Cambodia National Rescue Party (CNRP) who during these elections, managed to take 482 of the 1,646 seats of commune chiefs. The CPP, nonetheless, received the overwhelming majority of commune chief seats and commune councillor seats. This election occurred in the run-up to the parliamentary election in July of 2018. While the elections dictated the first half of June with instances of recounting votes and accusations of fraud, Cambodia also saw incidences connected to illegal logging, as well as an uptick in arrests of individuals impersonating government officials, NGO officials, and journalists as a way to extort money from individuals. 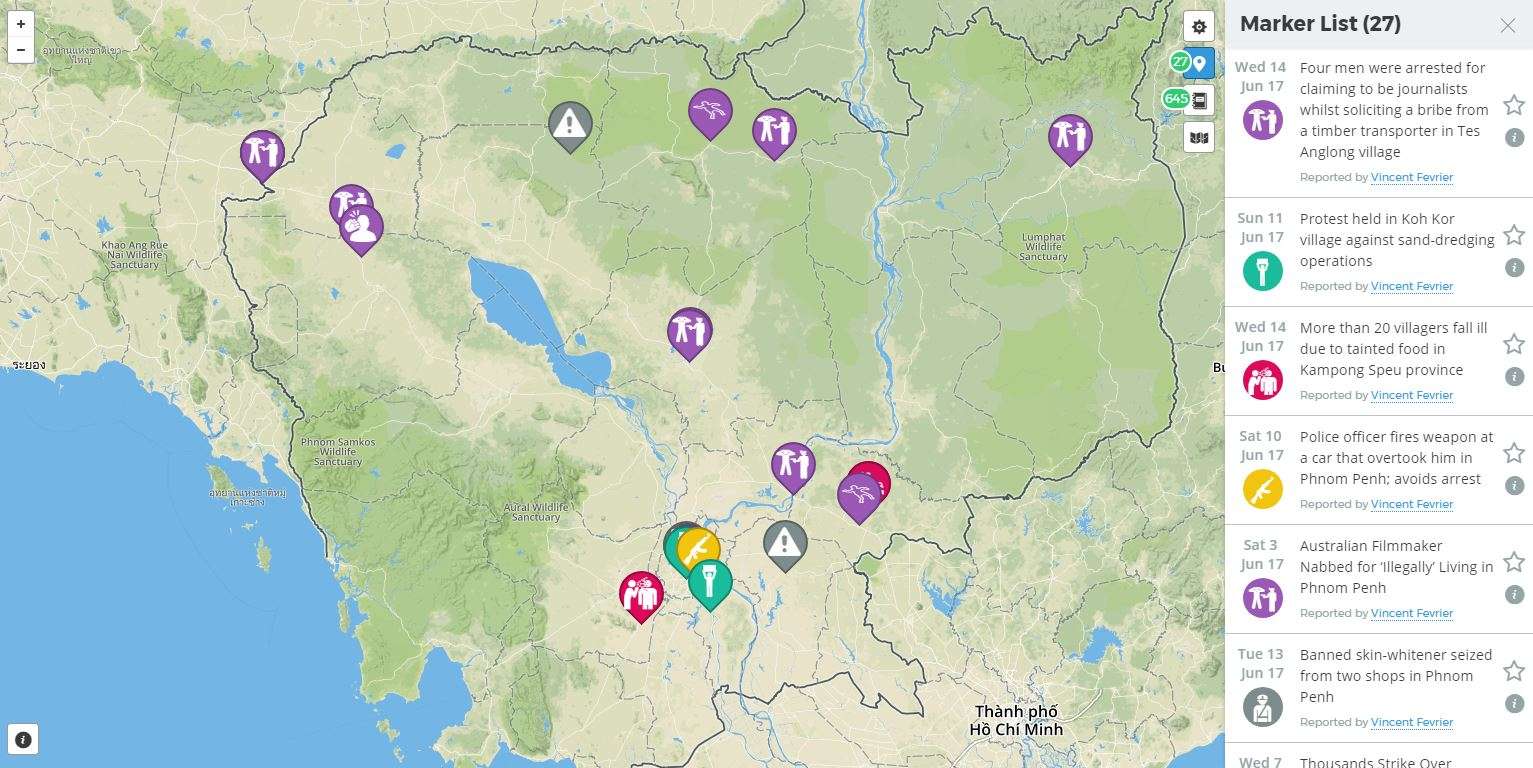 Incidents in Cambodia first half of June. (Click on above image to expand).
While countries continue to battle crime in their own borders there is a continued need for them to work together to address transnational issues such as terrorism. The ongoing fight in Marawi in the Philippines, has led to the discovery of foreign fighters from Indonesia, Malaysia, and even Chechnya among others within the ranks of the Maute Group. This shows a continued ability by foreign fighters to transit through countries in the region to make it to the southern Philippines. The events have led several countries to agree to launch regular air patrols over the Sulu and Celebes Seas, as well as continued maritime patrols in order to halt the movement of militants. Individually, countries will need to implement more robust counter-terrorism measures to fight the spread of Islamic State ideology and recruitment.
Back to Reports & Resources