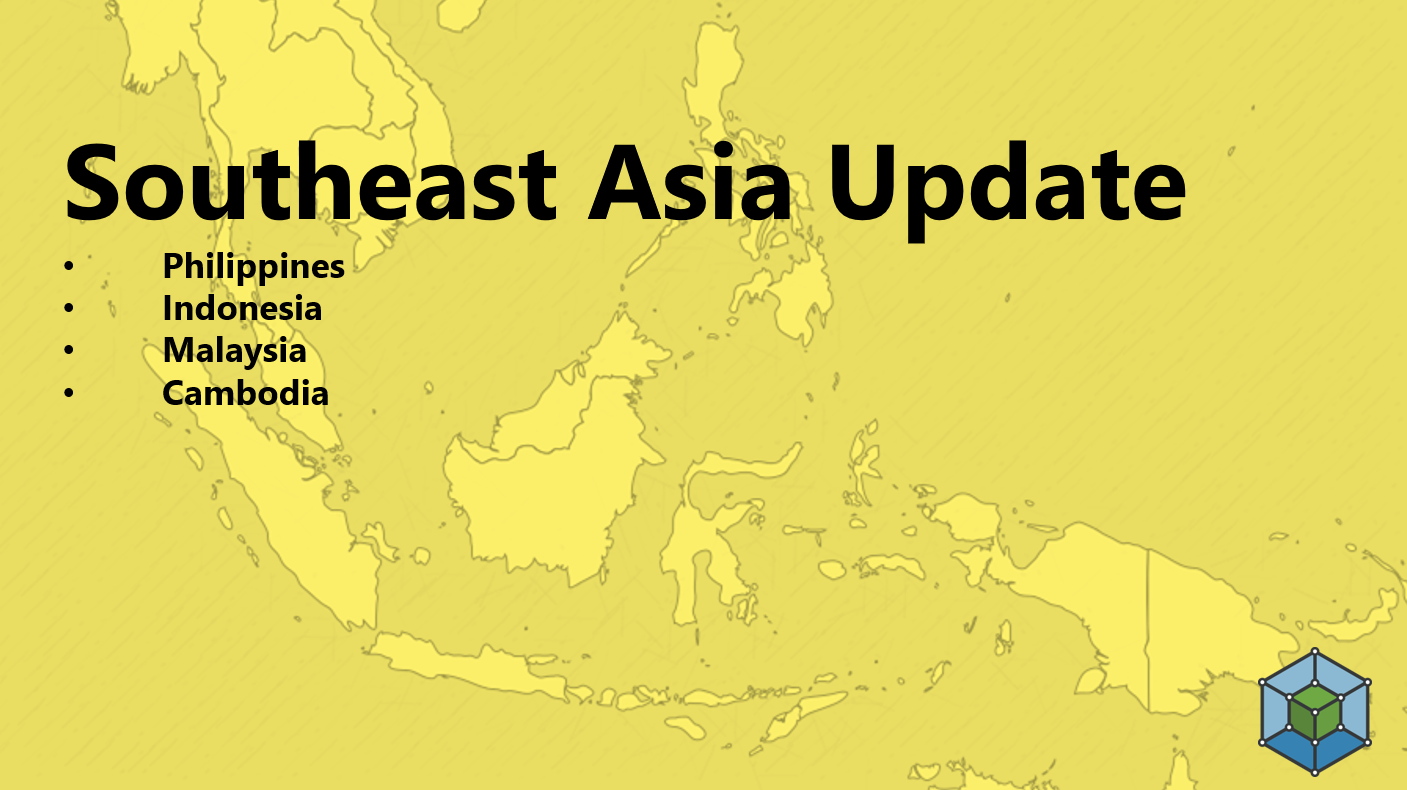 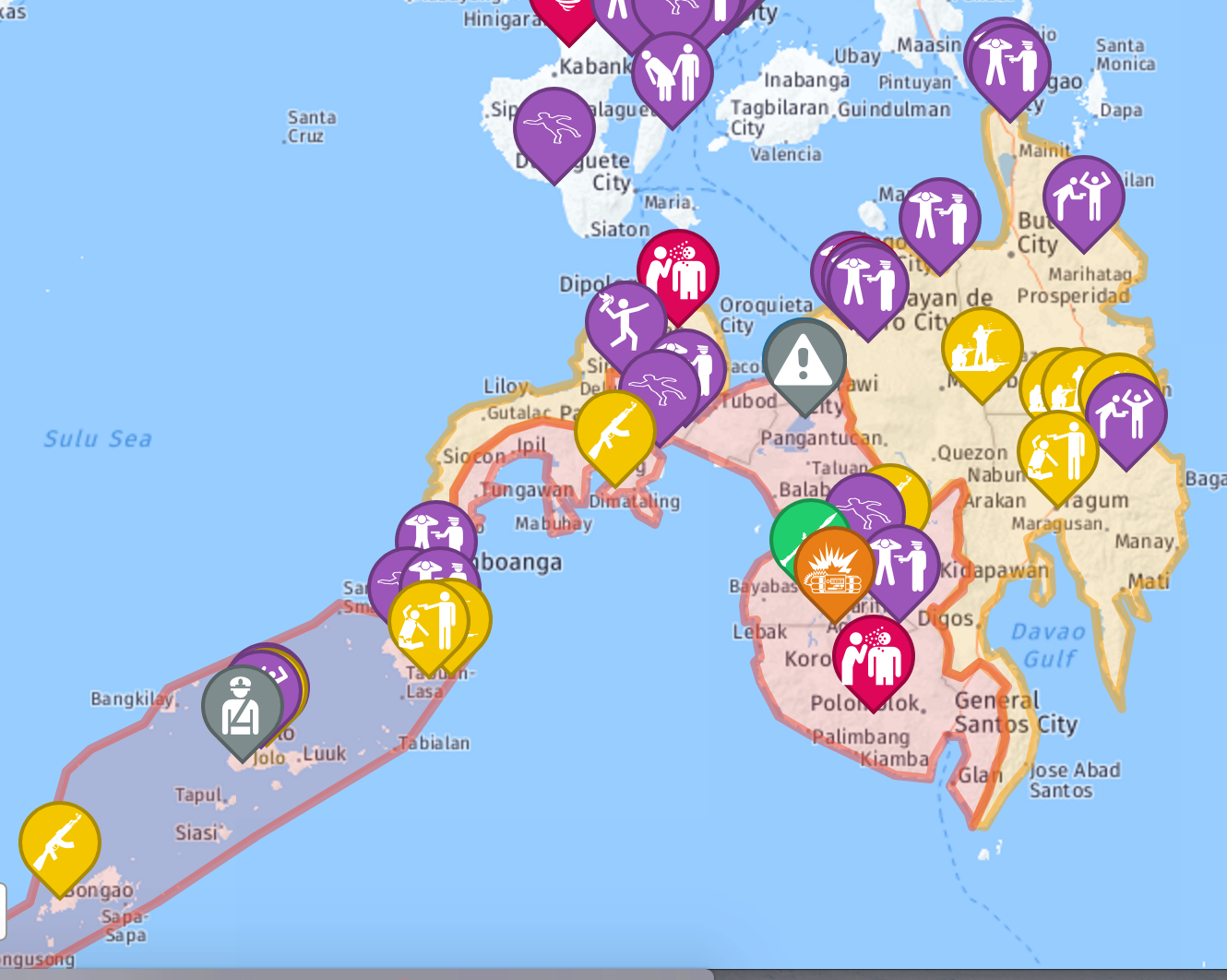 Incidents in Mindanao first half of July. (Click on above image to expand).
The first half of July has seen significant activity in Mindanao, Philippines from the likes of the New Peopleâs Army (NPA) and Abu Sayyaf Group, and the Maute Group. NPA activity has been high in the Compostela Valley province, where the army and the NPA have engaged in several skirmishes over the reporting period, and where a policeman was abducted by the group during the night of July 11th. Additionally, 2 NPA leaders were arrested in a few days interval at the beginning of July in Surigao City. The NPA has not only been active in Mindanao, but has also been engaging the army in the provinces of Kalinga, Abra, and Quirino. On July 11th, six soldiers were wounded in a landmine attack in Quirino Province, while three days later in the same province another landmine attack took place which wounded five policemen. The first half of July has seen a rise in attacks by the NPA after a lull had taken place while the army was focused on Marawi City.
In Marawi City, the army has continued its bombing campaign and ground operations to rid the city of Maute Group militants. In the first half of July, operations have continued steadily, but have seen another instance of friendly fire. An errant bomb landed on buildings near an army position, and 2 soldiers were killed while 11 were wounded from being hit by debris. While Abu Sayyaf members have been part of the militant force in Marawi City, much of the groupâs activities have been concentrated in Sulu and Basilan Islands. In the first half of July there have been several skirmishes between the group and the army which has led to over a dozen people wounded and several wounded. The group has also been quite active regarding its kidnapping victims. Two Vietnamese sailors were found beheaded, both of whom were a part of a fishing boat crew kidnapped in February. On the 15th of July, five construction workers kidnapped at an elementary school in Bangkal, Patikul, Sulu. 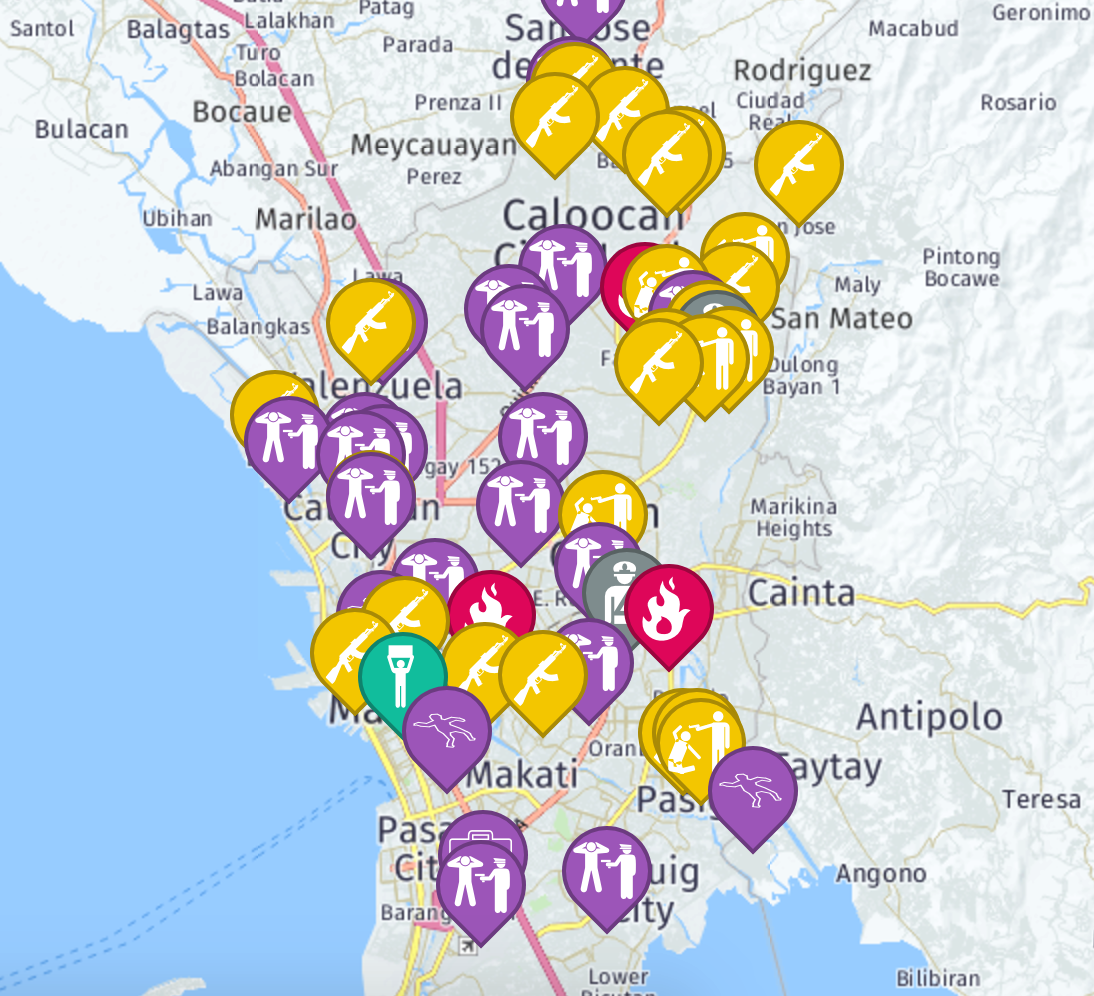 Incidents in Metro Manila first half of June. (Click on above image to expand).
In Manila, more arrests and shootings have been reported in the first half of July. The majority of shootings reported are related to shootouts between the police and drug suspects, or by vigilantes against drug users and pushers. The preferred method by vigilantes is either through a motorcycle drive by, or through home invasions of the victims. This reporting period has seen a cluster of shootings forming around Barangays Holy Spirit, Batasan Hills, and Commonwealth.
Indonesia 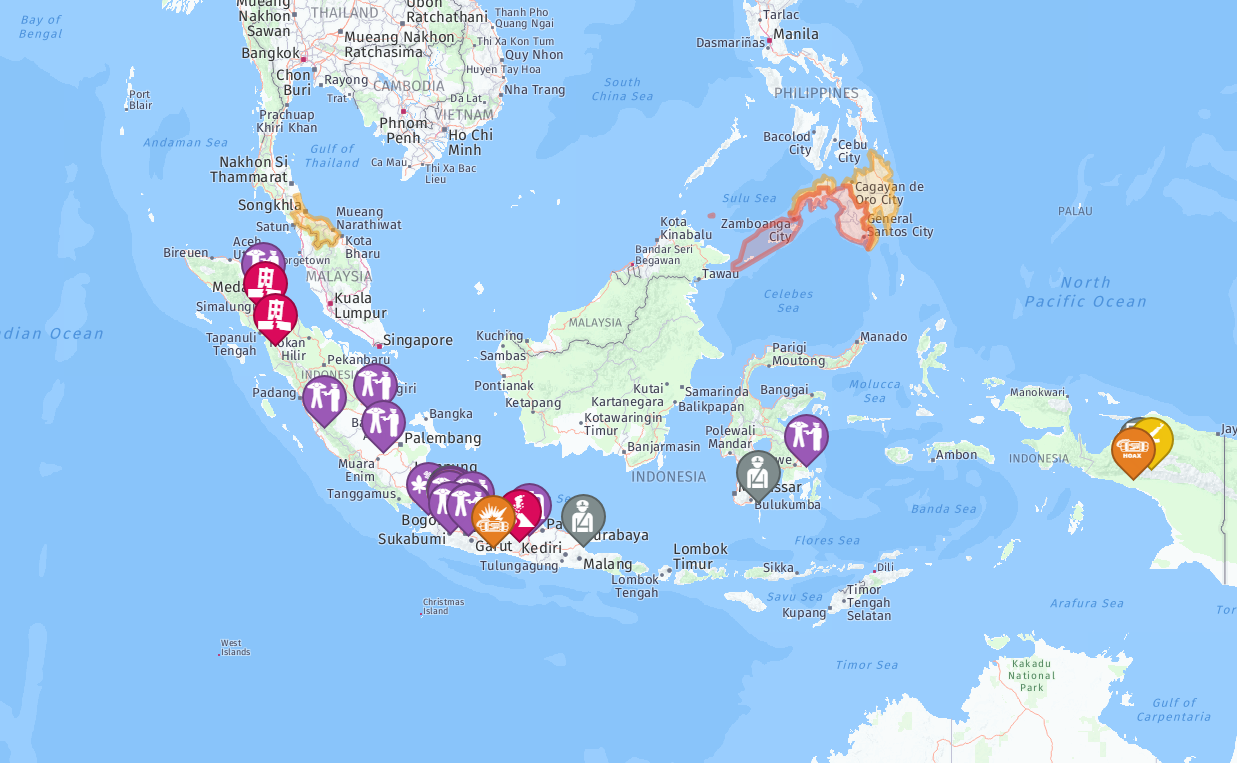 Incidents in Indonesia first half of July. (Click on above image to expand).
The first half of July has seen significant incidents take place in Indonesia related to terrorism, but has also seen several incidents regarding criminality. In regard to terrorism several incidents took place in West Java in the vicinity of Bandung and Sukabumi. On July 8th, a bomb exploded inside a bomb-makerâs house in Bandung, which in turn alerted authorities who arrested him. The man was part of a plot to bomb several targets around Bandung that included a cafÃ©, a restaurant, and a church. In the following days after the arrest, Densus 88, the counter-terror unit in Indonesia, arrested several other suspects linked to the plot. These arrests come weeks after a couple incidents involving policemen being stabbed by militants, and several threats against police, military and public spaces. 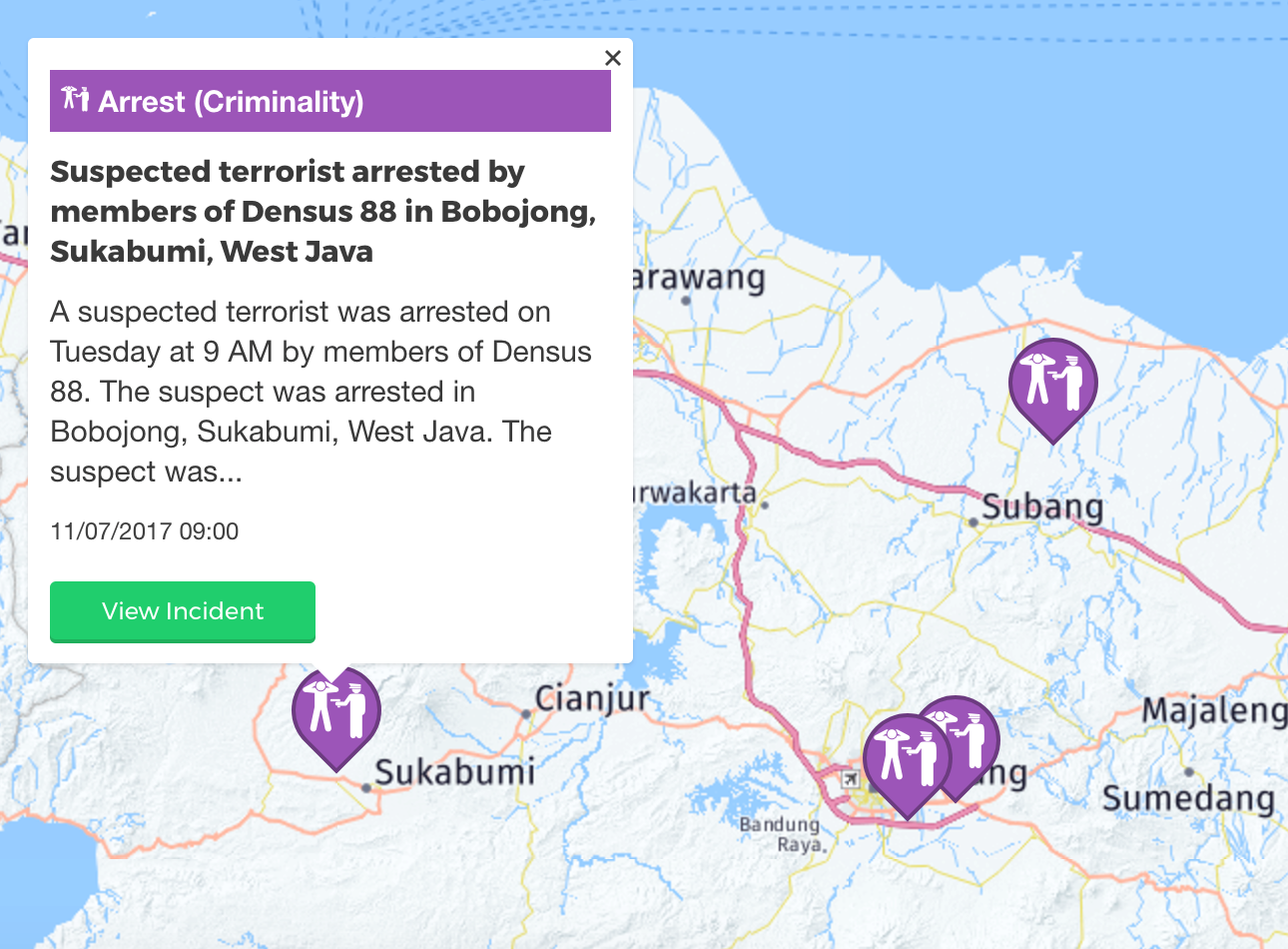 Terror related incidents in West Java – July 1st – 15th.
Regarding significant criminal incidents in the first half of July, police arrested two men and killed another in Serang, Banten who had been plotting to smuggle a ton of methamphetamine from China. The Indonesian police was alerted by Taiwanese authorities. Other criminal incidents saw a motorcycle gang attempt to attack several people in South Jakarta, a weapons trafficking ring discovered in Central Java, and the arrest of the Southeast Sulawesi governor for corruption. While terrorism continues to be one of the main security concerns, it is important to acknowledge other forms of criminality such as drug and weapons trafficking, as they can be a means for terror groups to make money, but also shows certain struggles in securing such an extensive network of islands and porous borders.
Malaysia

Incidents in Malaysia first half of July. (Click on above image to expand).
In Malaysia, during the first half of July, no major terror related incidents have taken place unlike the Philippines and Indonesia who are affected by several groups. On July 7th, nonetheless, a school teacher in Kuala Lumpur was charged with supporting the Islamic State. The charges were brought against him after several images related to the group were found on his phone, as well as being part of a Telegram channel for the group. While Malaysia has not been hit with terror attacks the same way as its neighbors, it is important for them to stay vigilant, particularly as it is known that the country has served as a transit point for many fighters, and some fighters from Malaysia have been found to be fighting in Marawi City, Philippines with the Maute Group. As the host nation of the South-East Asia Games, which are to be held in August, Malaysia held a security drill at the Kuala Lumpur City Center. The drill, Ex-Rimau 2017, involved over 400 officers of various police units and was held July 9th and 10th. Over drills were to be held at different dates. The officers worked around scenarios created for the problems that could be faced such as the threat of terrorism from abroad.
In regard to criminality, Malaysia launched a crackdown on illegal immigrants and employers hiring them. On July 1st, the first day of the crackdown, over 1000 migrants were detained and 16 employers arrested. Since then, operations have been ongoing and several illegal migrants have been detained across the country such as in Kota Kinabalu and Johor Baru. The incident near Johor Baru involved 7 migrants from Indonesia attempting to leave the country illegally. While some migrants enter of their own free will, there are instances where some are trafficked. On July 2nd, five victims of human trafficking were rescued from a retirement home where they had been forced to work between 2 and 10 years. Incidents of human trafficking have been recorded in several countries in South East Asia such as Malaysia, Indonesia, Philippines among others. Finally, corruption has also been an issue that the government has tried to stamp out. Several government officials have been arrested for corruption, particularly in Malacca. During this reporting, a customs officer was arrested at a bus station in Bintulu, Sarawak for having taken a bribe to ensure a smooth process for the goods of company here in Malaysia. Incidents of corruption at ports of entry whether a bus station, and airport or a seaport has ramifications for the security situation in the country and the region.
Cambodia 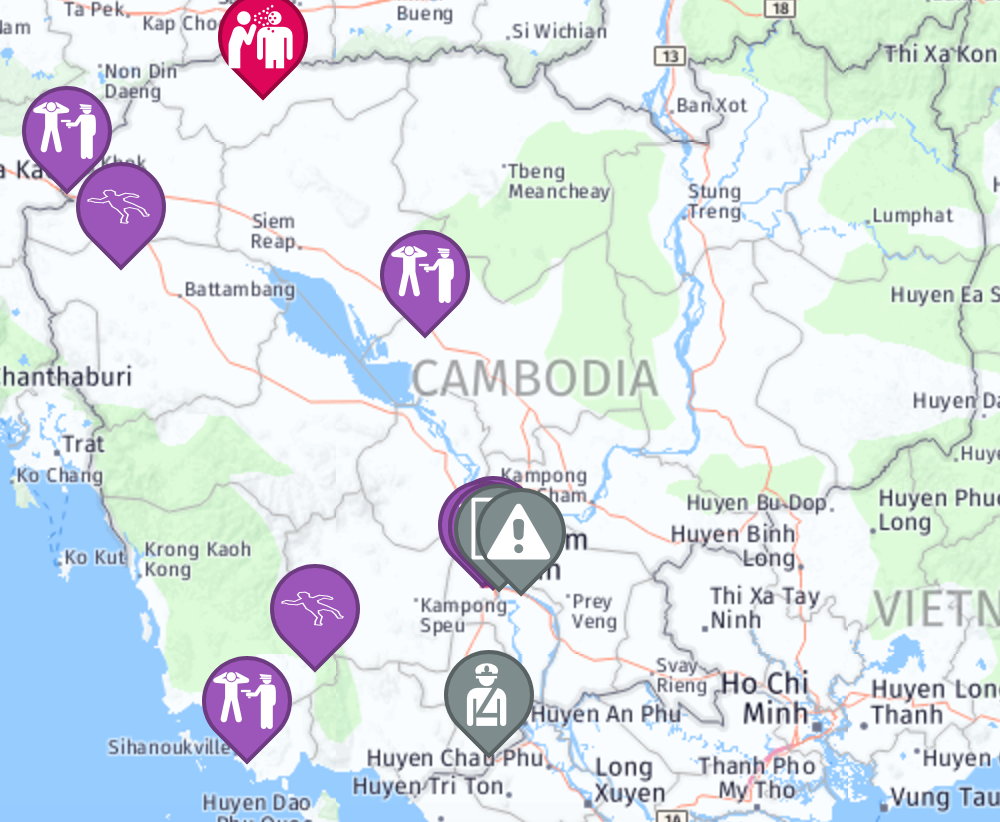 Incidents in Cambodia first half of July.
Reporting in Cambodia has been scant in the reporting period of the first half of July, but there have nonetheless been several important events that have taken place. Due to the porous borders between Cambodia and neighboring countries, it makes it a transit country for many illicit goods such as methamphetamine known as âYabaâ or âShabuâ within the region, weapons, illegally cut wood, and ideal for humans to move across to various countries legally or illegally. On July 3rd authorities destroyed 12,000 marijuana plants in Takeo province in Southeastern Cambodia after villagers stumbled upon them. On July 6th, 11 Cambodians were arrested across the border in Thailand after trying to cross back into Cambodia. Many migrants who had illegally crossed into Thailand have been looking to cross back into Cambodia after the Thai government started a crackdown on illegal migrants, similar to the crackdown in Malaysia which has been ongoing in July. A day later, on July 7th, authorities stopped a petrol tanker and during the search seized illegally cut rosewood from within. The driver said he was not aware that he was smuggling wood, as he was not informed of the contents of the truck. Similar incidents have occurred since the beginning of 2017, particularly the movement of illegal wood towards Vietnam.
An event of particular importance in July which could have consequences for next year, has been the Cambodian Parliamentâs move to amend the election law in order to ban people from associating with anyone convicted of a criminal offence. The move comes after the Prime Ministerâs political party, the CPP, won the local elections in early June. While the CPP won the majority of communes, the CNRP, the opposition party, did not do badly and therefore could prove to be a more important challenge next year in the parliamentary elections which could be an affront to the Prime Ministerâs power, after more than three decades as Prime Minister. The CNRP have decried the law as being politically motivated and a move to silence the opposition, while the CPP have denied these allegations, and say that this is solely to promote the rule of law and improve democracy. This law would ban the opposition leader Sam Rainsy from campaigning for the CNRP from France where he is exiled. Parties who violate the law could face suspension of their activities for five years or be dissolved. The effects of this law may be seen in the next few months with protests from the CNRP in the streets of Phnom Penh, which could lead to more political repression in the months leading to the parliamentary election in the summer of 2018.
Back to Reports & Resources