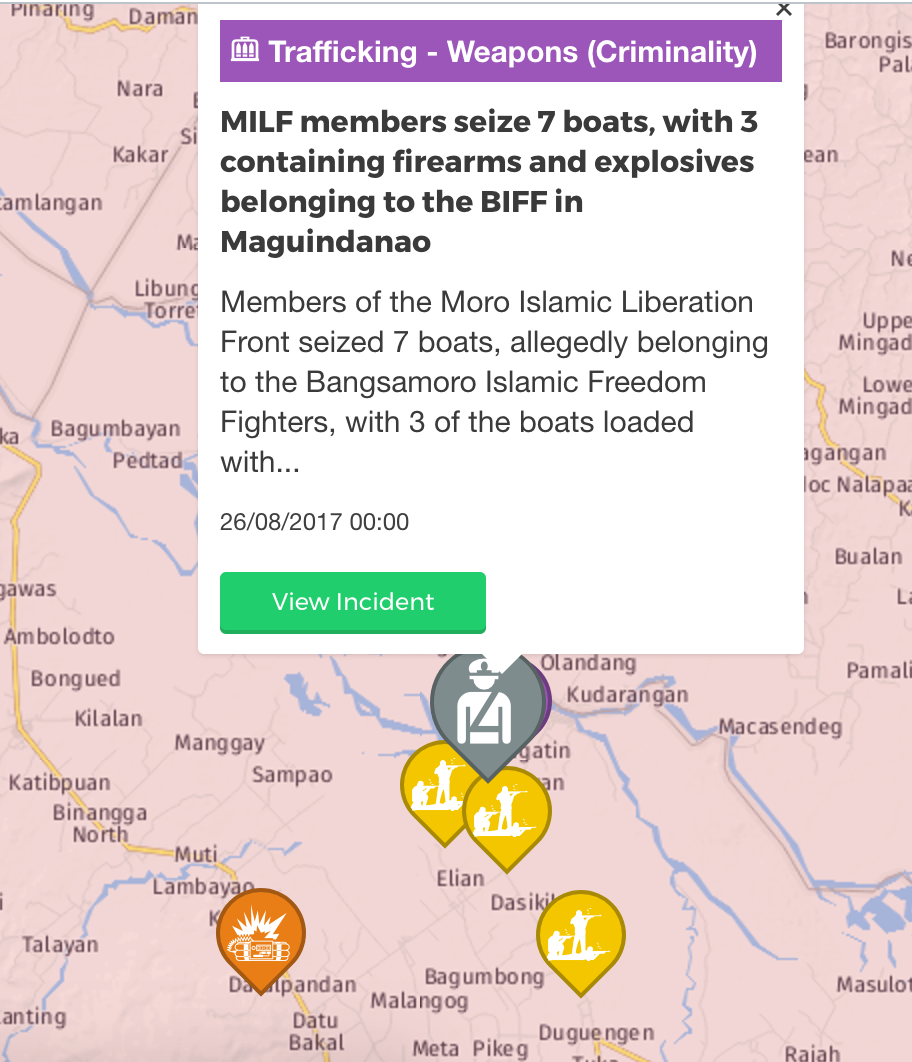 Incidents related to the ongoing fighting between Moro Islamic Liberation Front and Bangsamoro Islamic Freedom Fighters in Maguindanao â Aug 15th â 31st
Activity regarding the New Peopleâs Army has decreased slightly in the second half of the month, but has seen several incidents of weapons trafficking around Davao City, which has brought fears that the group had reactivated its urban hit squad to take out policemen and soldiers in urban centers. Most skirmishes have taken place in the southern Philippines, with a couple taking place in the provinces north of Manila, while the group is suspected of having assassinated a policeman and a Barangay chairman in Sorsogon province.
The most significant incident for the month of August in the Philippines took place on August 21st when a group Abu Sayyaf members descended on Barangay Tubigan in Maluso Town, Basilan around dawn, killing 9 civilians and wounding 16 others while they were preparing for the village fiesta. A group of armed villagers fought them off until the army could get there and begin pursuit operations after the fleeing terrorists. This is the most significant attack against civilians the group has undertaken this year.
Regarding President Duterteâs War on Drugs, shooting incidents increased significantly in the month of August, particularly those involving police officers shooting suspects during anti-drug operations. Much of the police-involved shootings took place in the west of the city, while most killings perpetrated by vigilantes took place in Quezon City with a concentration around Barangays Holy Spirit, Commonwealth, and Batasan Hills. The presidentâs campaign against drugs came under severe scrutiny this month, as a 17-year-old boy was killed in an anti-drug operation, where CCTV footage contradict statements made by the police. This has caused several demonstrations as well as an investigation into the shooting to hold those who killed the boy accountable. 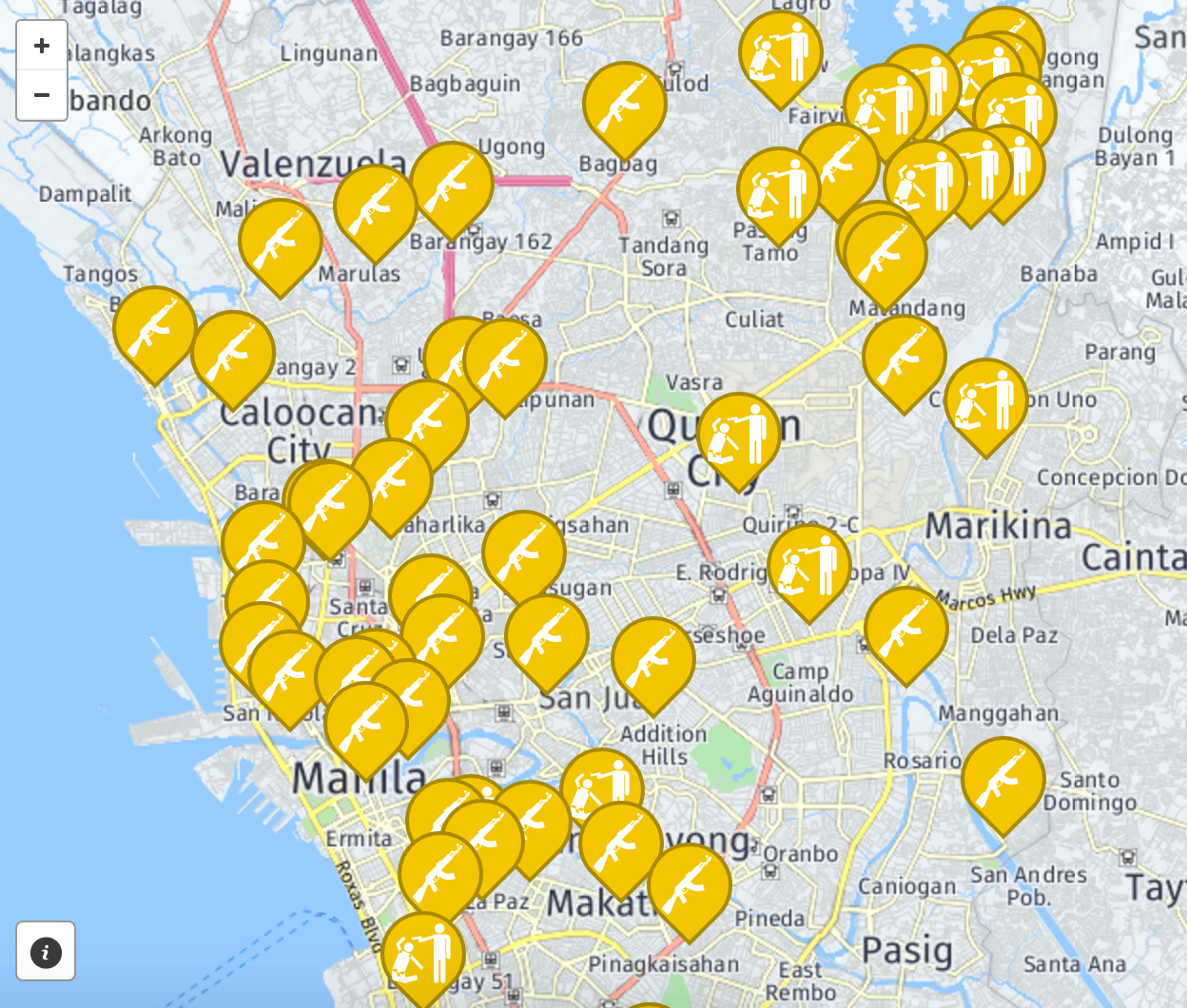 Shooting incidents around Metro Manila â August 1st â 31st
Myanmar
The most significant incident in August in Myanmar took place in the second half of the month. On August 25th, over two dozen border outposts and a military base were attacked by hundreds of Rohingya Muslim militants. The initial attacks have left 11 government security forces personnel killed, with over 100 Rohingya Muslim militants killed. The Arakan Rohingya Salvation Army have taken responsibility for the coordinated attacks, and were declared a terrorist group by the Anti-Terrorism Central Committee afterwards. This meant that they were to be referred as terrorists in the media and public discourse, rather than being called insurgents. Fighting has continued since the initial attacks, and fires have been observed in several villages which have been blamed on government forces, while the government has blamed the arson on the Rohingya Muslim militants. The fighting has also caused significant civilian displacement. Rohingya Muslims are attempting to cross into Bangladesh. While some have made it across the border, a large portion are stuck in no-manâs land between the two countries, where there have been reports that the Myanmar Army have fired mortar shells and small arms fire in their direction. Some civilians have also died while attempting to cross the Naf river into Bangladesh. The situation is dire, and there are fears that the Myanmar government will respond severely in Rakhine State making the situation worse for civilians. One of the nationalist Buddhist monks has also called for martial law within Rakhine, prompting fears of significant crackdowns on those of Rohingya ethnicity. 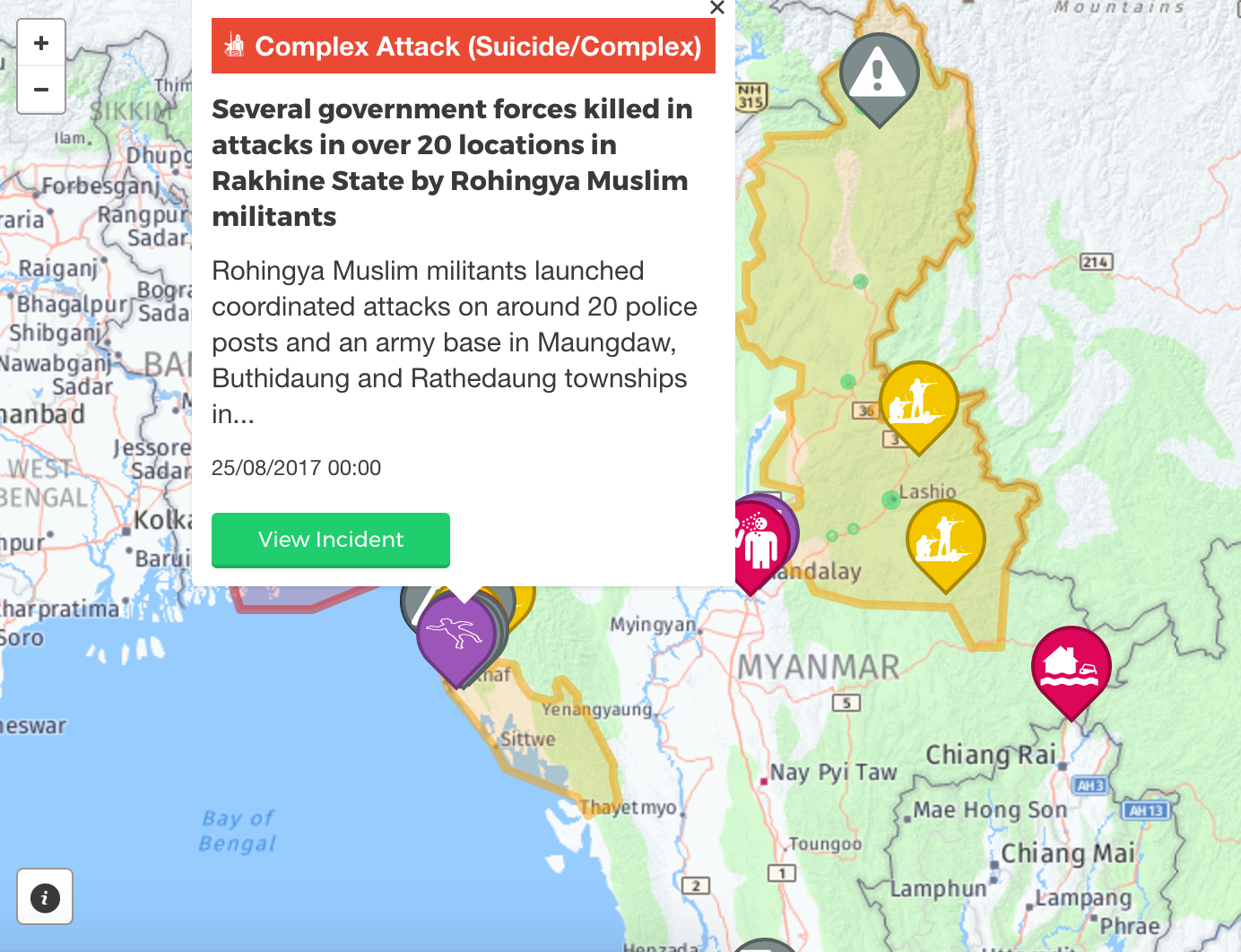 Incidents in Myanmar â August 15th â 31st
Indonesia â All of August
The first half of August in Indonesia was marked with the arrests of several terrorists all within a short span of time, between August 11th and 15th. This involved a man arrested in Serpong Utara in South Tangerang, west of Jakarta, for being an alleged recruiter and fundraiser for the pro-ISIS militants in the Philippines. A day later a man was arrested in Sumedang, West Java for his involvement in the Kampung Melayu bombing in Jakarta that killed 3 policemen. That same day, 19 alleged Indonesian Islamic State supporters arrived back to Jakarta after having been deported by authorities in the Middle East. These 19 individuals will have to undergo de-radicalization through a government program. A day later, 2 terrorists were arrested in Slawi, Central Java, for their involvement in financing another member to get to Marawi City in the Philippines to join the Maute Group there. The most significant incident, though, took place on August 15th when 5 suspected Islamic militants were arrested in Bandung for planning attacks against the presidential palace and a police HQ in Jakarta. What makes this a significant incident is that chemicals were found in one of the houses. Terrorists in Indonesia this year have so far only built pressure cooker bombs with nails as shrapnel, but the discovery of chemicals has shown that their methods are continuing to evolve to be deadlier. Reports have said that the group were planning to detonate a dirty bomb at the site of the attacks.
Besides the arrests of several terrorists, August has seen several drug and human trafficking incidents. Regarding drug trafficking, 5 traffickers were arrested in North Aceh attempting to smuggle methamphetamine from Penang, Malaysia by boat. Penang is located directly across from North Aceh, and has been the site of several drug trafficking related arrests in 2017, and the location of several drug labs which have been dismantled by Malaysian police. Other significant drug related incidents in Indonesia include the find of 60kg of crystal meth in a bag at the Season City Mall in West Jakarta, and the shootout between police and members of a drug syndicate in West Kalimantan. In that shootout, 2 traffickers were killed and 5 were arrested, while 17.5kg of crystal meth was seized. The men had smuggled the drugs through Kuching, Malaysia. 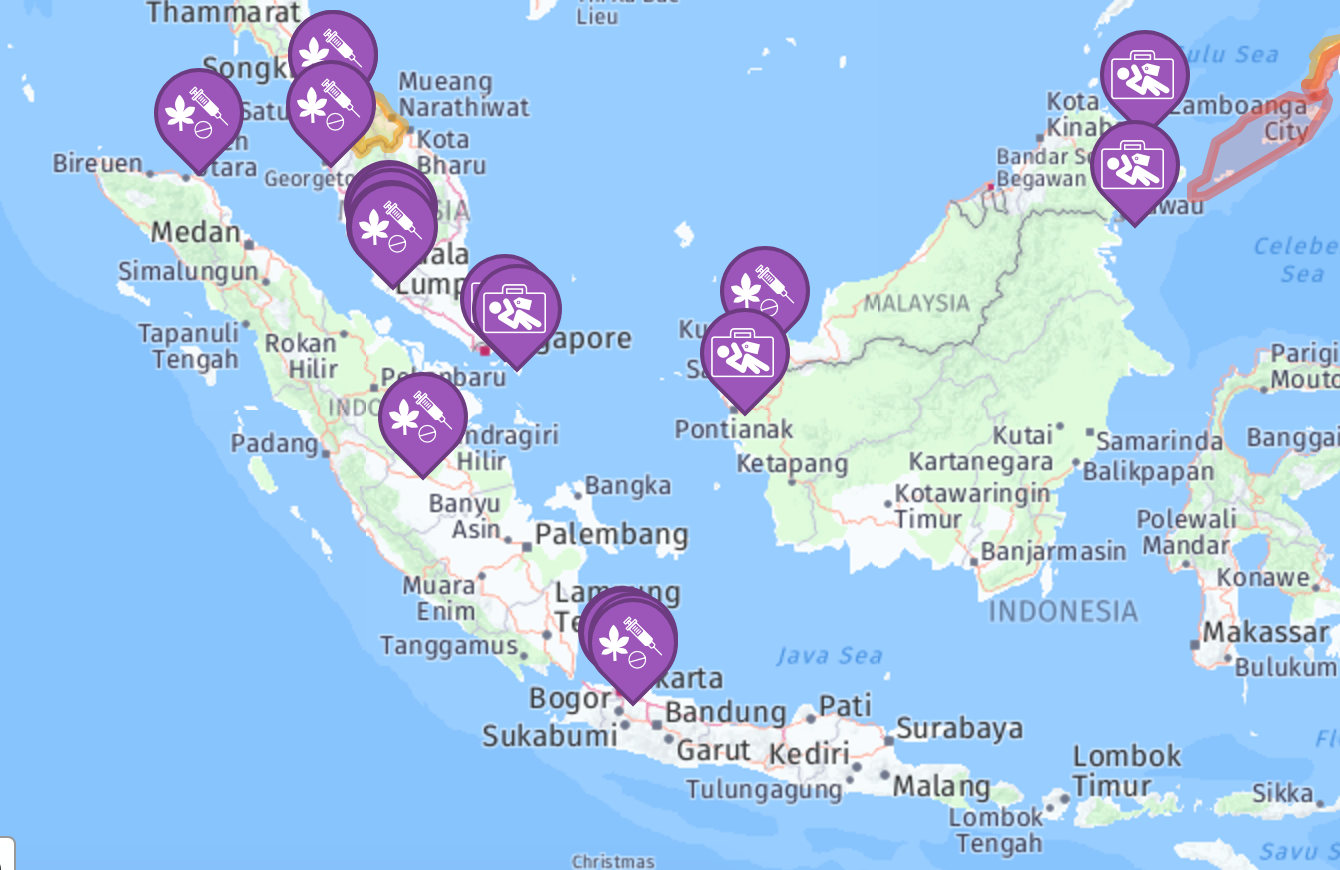 Drug and Human Trafficking Incidents in Indonesia and Malaysia â August 1st â 31st
Regarding human trafficking, most trafficking involves the movement of illegal migrants between Indonesia and Malaysia. These attempts at crossing the border occur primarily in East Kalimantan trying to get to Tawau, Malaysia, or through the Riau Islands to get to either Singapore or Johor, Malaysia. A large number of Indonesians who migrate to Malaysia illegally either work in plantations in Sabah or in nightclubs in Kuala Lumpur and Johor Baru.
Malaysia â All of August
Malaysia hosted the 29th Southeast Asian Games with an opening ceremony on August 19th, and closing ceremony on August 30th. The games were hosted in a number of cities across the country, with the bulk of the events held in Kuala Lumpur. Police held several drills prior to the games in preparation for the events, and counter-terrorism and immigration raids increased in the weeks prior to the start, in order to ensure maximum security. No significant criminal incidents took place in the two weeks the events took place, besides some thefts and some assaults by Malaysian football fans on opposing fans from Myanmar and Indonesia. On the 22nd of August, 27 Malaysian websites were hacked by a group of Indonesian hackers who defaced the sites and made the Indonesian national anthem play in the background of the pages. Similarly, a day before, the Instagram of a Malaysian gymnast was hacked and photos deleted. Police have said the hacks were perpetrated by Indonesian hackers after the Indonesian flag was printed upside down in the SEA Games program. 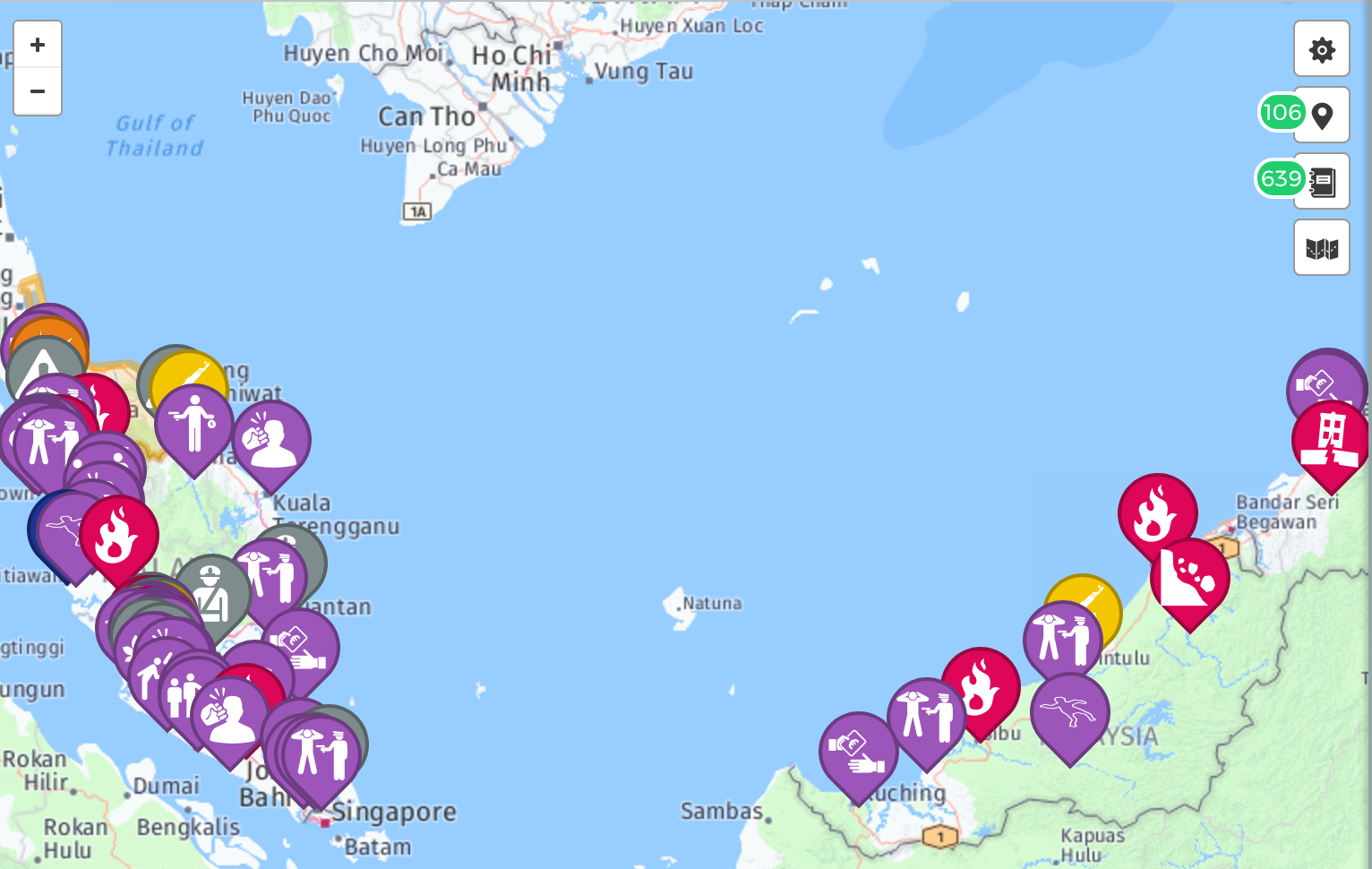 Incidents in Malaysia â August 1st â 31st
The majority of incidents recorded during August took place in Kuala Lumpur. The highest number of incidents were arrests, particularly in relation to drugs, sexual assaults, and corruption. Only 5 shooting incidents were recorded with 2 being fatal accidents, one man was shot in the knee outside his home, a detective was shot and killed in Kedah, and on August 31st, there was a brutal killing of a police officer in the Pinggiran Subang Jaya police station. Most murders in Malaysia are committed with bladed weapons. The largest drug seizure in August was undertaken at the Bukit Kayu Hitam checkpoint between Malaysia and Thailand, where 75.5kg of ganja was seized from a hidden compartment in a car. This checkpoint has seen a high number of incidents in 2017 from the smuggling of drugs and other contraband. Malaysia, with its location between Thailand and Indonesia, and located on one of the busiest trade routes in the world, will continue to see a high number of incidents related to smuggling, whether drugs, humans, or other goods.
The most significant incident in Malaysia, for the month of August, was the arrest of eight members of the Abu Sayyaf Group on August 30th. The arrests were made in Cheras district, in the capital Kuala Lumpur. While Abu Sayyaf is a group based in the Philippines, they have recruited Malaysians, as well as undertaken kidnapping operations in Sabah, Malaysia in the past. The arrest is significant in not only its location, at the heart of the country, but also in that it will curb the attempts at recruiting Malaysians into the terror groupâs ranks. With news of the arrests, the Eastern Sabah Security Command said they were closely monitoring the state to ensure no Abu Sayyaf members entered.
Back to Reports & Resources