Philippines
The second half of June in the Philippines has seen a similar pattern of events as the first half of the month. Additional troops have been deployed to Marawi City and security forces have continued to battle the Maute Group in urban warfare in the streets of the city, while continuing air strikes on the neighborhoods still under Maute Group control. Some civilians have been rescued, but the Army found several decapitated bodies during the last week of June. Additionally, the Army has increased patrols on Lake Lanao after a route was found to have been used to ferry ammunition into the city, and relocate wounded militants to the southern side of the lake.
In other parts of Mindanao, Bangsamoro Islamic Freedom Fighters (BIFF) have continued to be active, and on June 21st a large group of BIFF members attacked Pigcawayan in North Cotabato. The ensuing skirmish between members of BIFF and the Army/local militia led to hundreds of civilians being displaced, as well as dozens of civilians being taken hostage by BIFF. These hostages were rescued not long after. In the south of Mindanao Island, a member of Ansar Al-Khilafa was arrested in General Santos City on June 27th, suspected of having been part of grenade attacks years prior. In other parts of Mindanao and across the Philippines, the New Peopleâs Army (NPA) has continued to be active even with peace negotiations looking to be restarted between the government and the group. Skirmishes between the group and the Army have been reported in Davao Oriental, Northern Cebu, Norther Samar, and Quezon among others. They have also been responsible for several arson attacks and the killing of two sugarcane plantation workers. 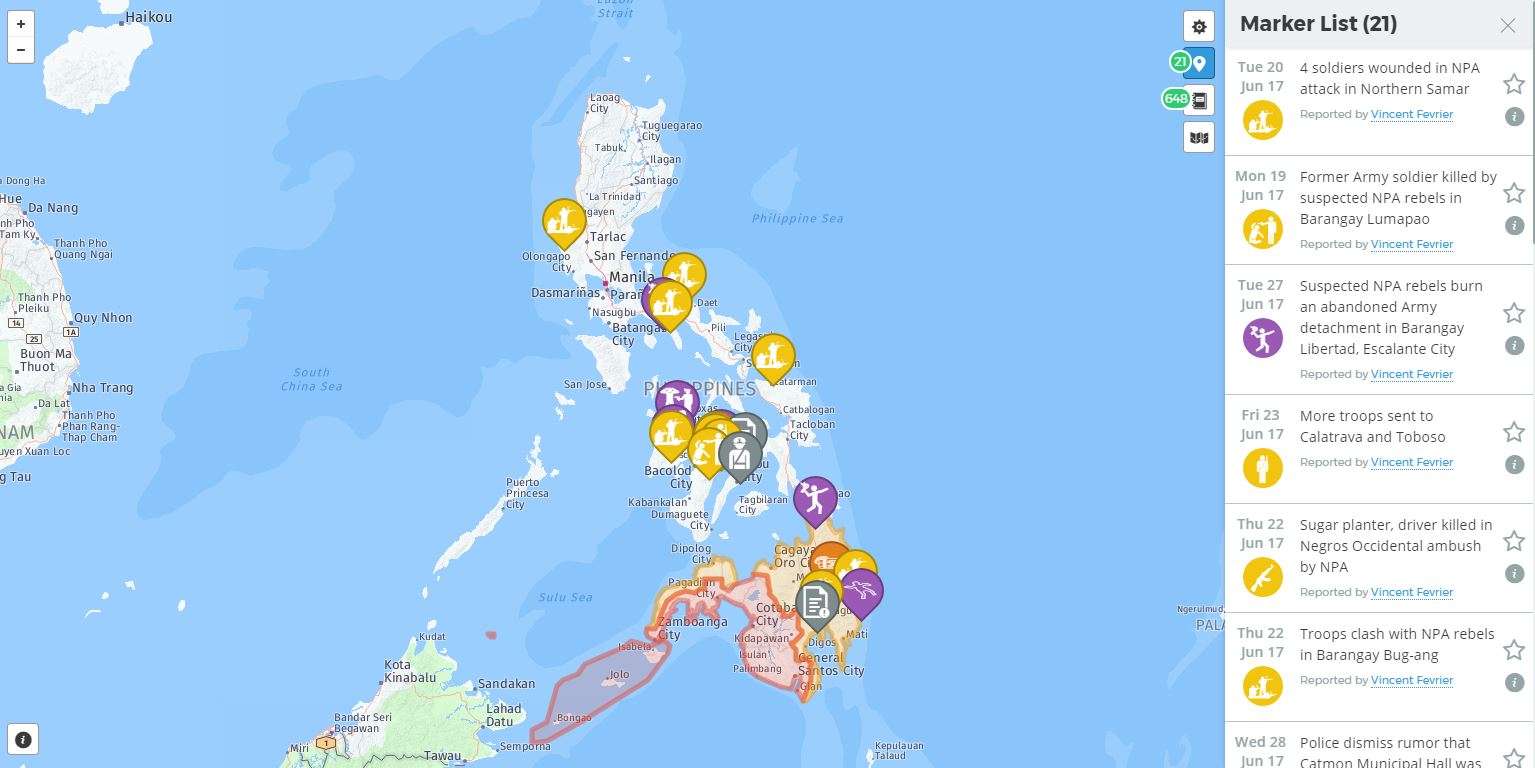 15th Jun – 30th May 2017. (Click on above image to expand)
Elsewhere, President Duterteâs War on Drugs continues to rage on, leading to the death of hundreds of drug pushers and users each month, either through shootouts with the police or through vigilante killings. Metro Manila continues to see the most incidents of gun violence against drug suspects, but Cebu, Bacolod, and Batangas areas also witness significant levels of violence.

Incidents involving shootings in Metro Manila in the second half of June. Incidents represent police shootouts with suspects as well as vigilante killings. (Click on above image to expand)
Indonesia 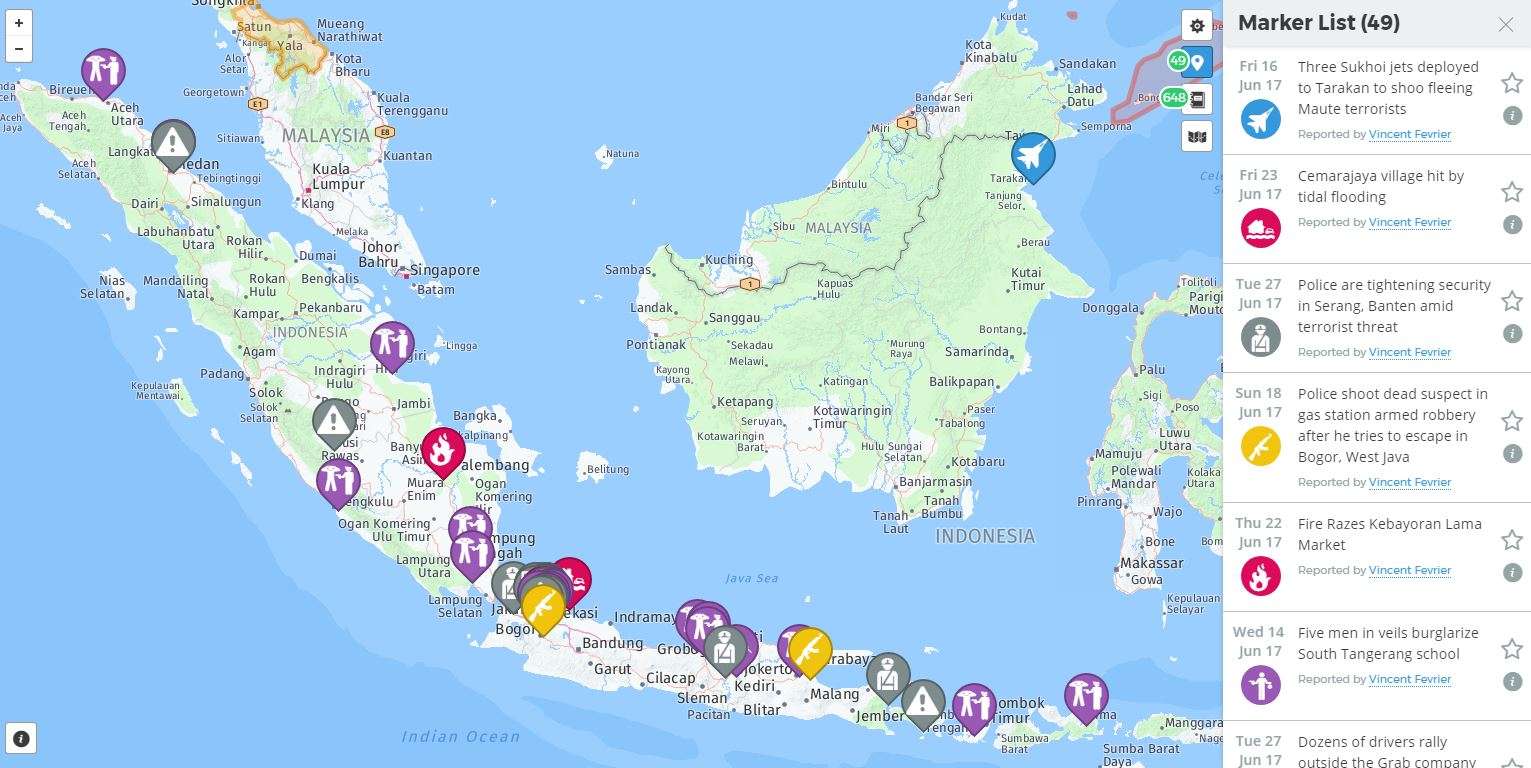 15th Jun – 30th May 2017. (Click on above image to expand)
The second half of June in Indonesia has witnessed several arrests and a high-profile terrorist incident. On June 17th, Densus 88 arrested 2 alleged terrorists in Bima regency. A day later, 3 more alleged terrorists were arrested in Kendal regency. On June 25th, two men attacked a police checkpoint outside the North Sumatra Police Headquarters in Medan. The man stabbed and killed the guard at the checkpoint before one was killed by mobile brigade officers and another was arrested. Police investigating the attack have attributed it to terrorism, and have said the men were looking to steal weapons for use in future attacks. Several people were arrested in connection to the attack, and police found ISIS propaganda materials targeted for children in the home of the suspect arrested in the attack. Two days after this attack, a man was arrested at the Central Java Police Headquarters carrying 3 knives. Police were investigating to see if the incident was connected to terrorism. Finally, on the 27th police discovered leaflets in Banten which pledge allegiance to the Islamic State, and which threatens police stations and crowded areas. Police are looking for the suspects, as they were captured on CCTV putting the leaflets on a police car. These incidents in the second half of June continue to show the threat that terrorists, both home grown and international, pose to the country.
Thailand
The southern provinces of Pattani, Narathiwat, Yala and Songkhla, which make up the Patani region, continue to be affected by the ongoing activity of insurgent groups. The month of June has seen several IED attacks, including 2 vehicle borne IEDs, targeting soldiers primarily in Pattani and Narathiwat provinces. Most have only wounded, but on June 19th, 6 soldiers were killed and 4 were injured when their truck was hit with an underground explosive on a road in Thung Yang Daeng district. Additionally, several village heads, a teacher, and a police informant were murdered in the region. The murders are likely to be the actions of insurgent groups who are known to go after those who represent any sort of government authority. 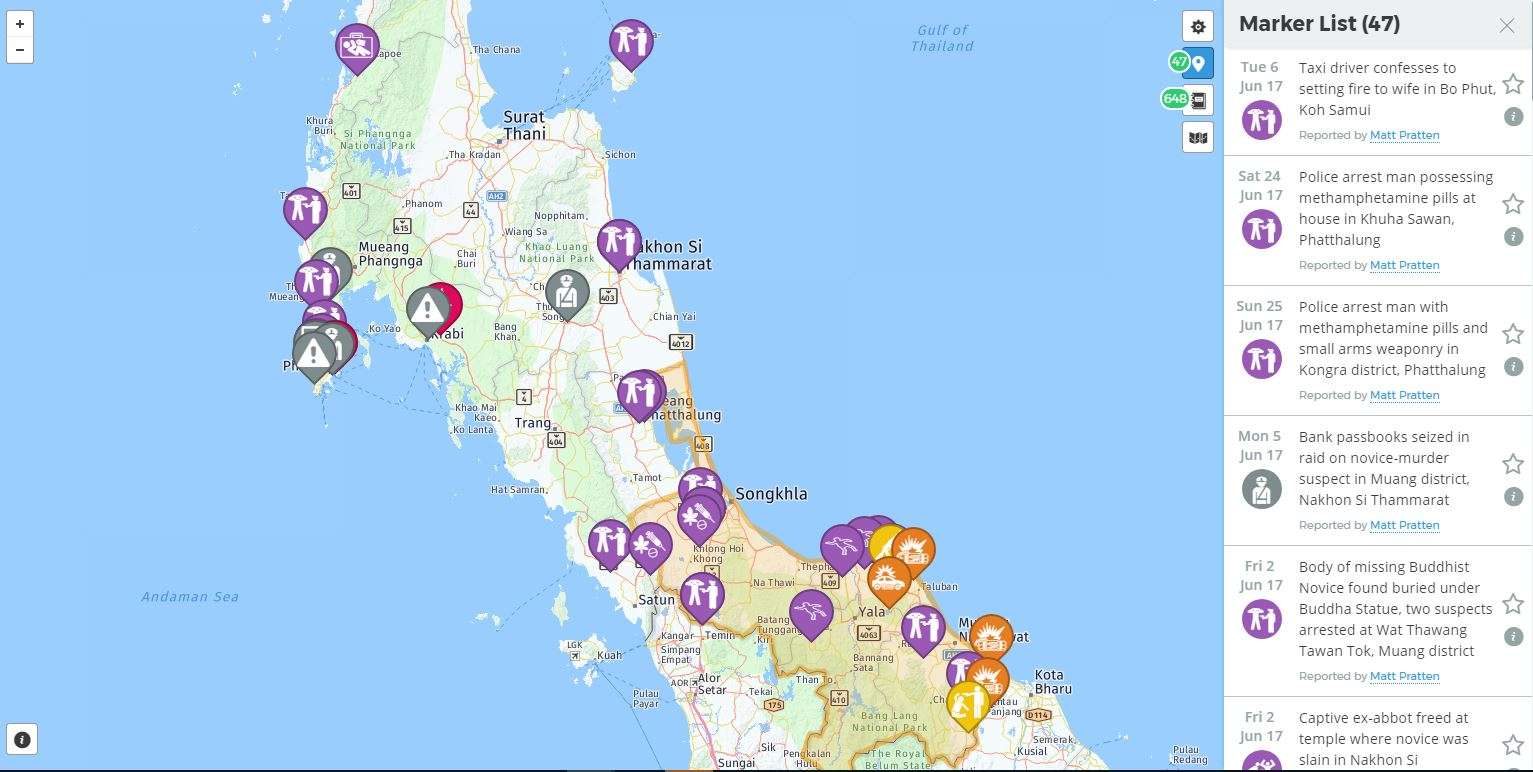 Incidents in June in the southern provinces of Thailand. (Click on above image to expand)
Countrywide, drug and human trafficking continue to be large factors contributing to criminal incidents recorded. Several incidents have been recorded along the Myanmar, Laos, and Cambodia borders. Drug trafficking between these countries, in order to ship to markets across the globe, leads to security incidents on the border areas, and shows the difficulty of authorities in these countries to control the flow of goods and people, and therefore show a weakness that can and has in the past been exploited by insurgent and terrorist groups. On June 16th, Thai troops along the border with Myanmar in Mae Sai district, shot dead a drug smuggler and arrested another one as they attempted to smuggle over 2 million pills of methamphetamine. 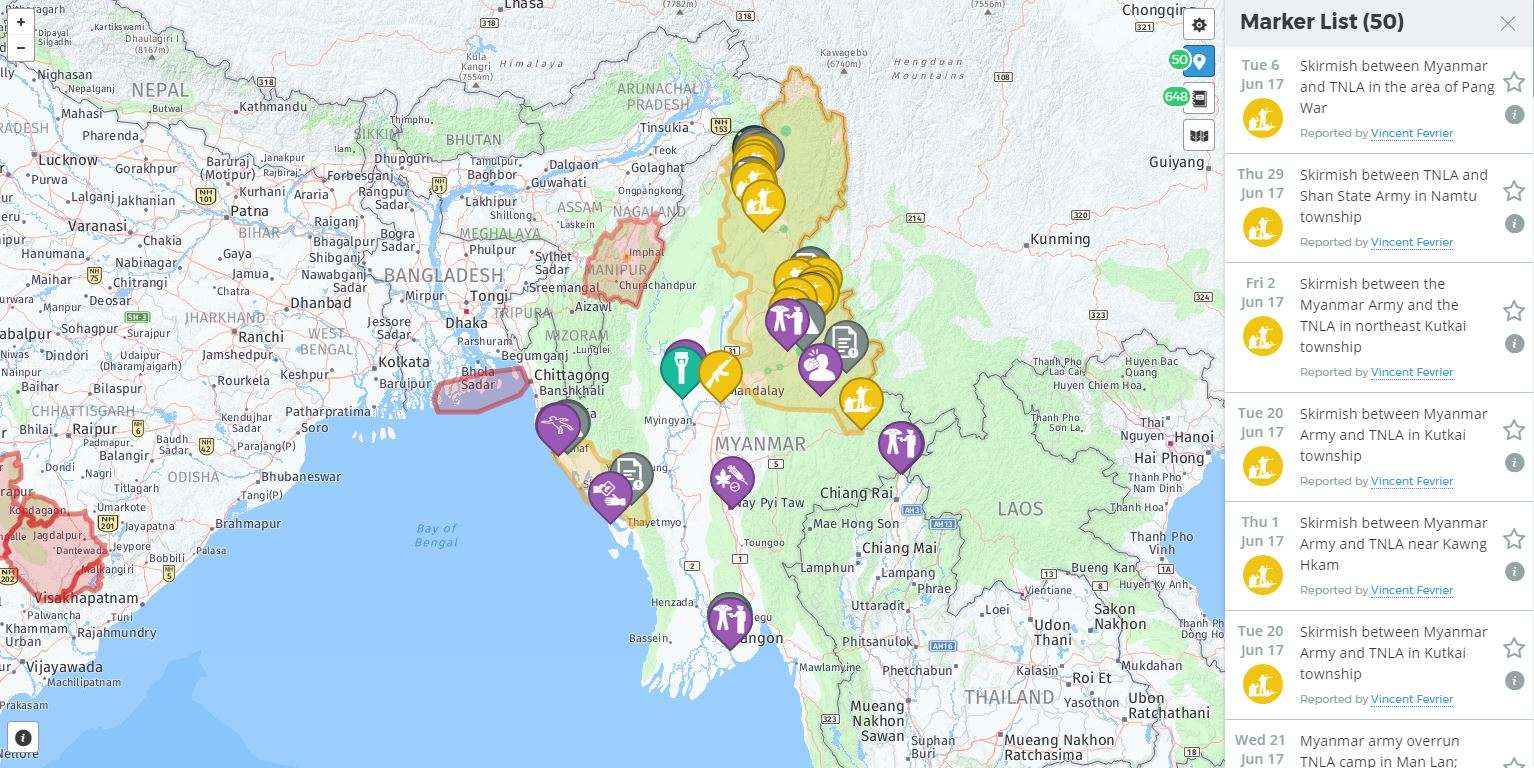 Incidents in Myanmar- June. (Click on above image to expand)
June has continued to see clashes between the Myanmar Army and several different insurgent groups around the country. In Rakhine State, the Army has been undertaking clearing operations in the Mayu mountains, where they have discovered a series of tunnels and camp used by terrorists. In Buthidaung, near the alleged training camp, 5 people were arrested in Tin Sat village for having attended the camp. In Kachin State, the Myanmar Army has been engaged in several skirmishes with the Kachin Independence Army, while in Shan State, the Myanmar Army has had reported skirmishes against both the Shan State Army (SSA) and the Taâang National Liberation Army (TNLA). Both the TNLA and SSA have also engaged each other in skirmishes in Shan State. Drug production in the border areas between Myanmar and Thailand continues to finance the various groups. On June 26th, over $385 million worth of drugs from opium, heroin and cocaine and meth were burned in large fires to celebrate International Day Against Drug Abuse and Illicit Trafficking. July will continue to see skirmishes take place between the Myanmar Army and different insurgent groups in Kachin, Shan and Rakhine States.
Outsource your intelligence requirements to us for as little as Â£270 per month and access not just our data on aSIA but the globe. 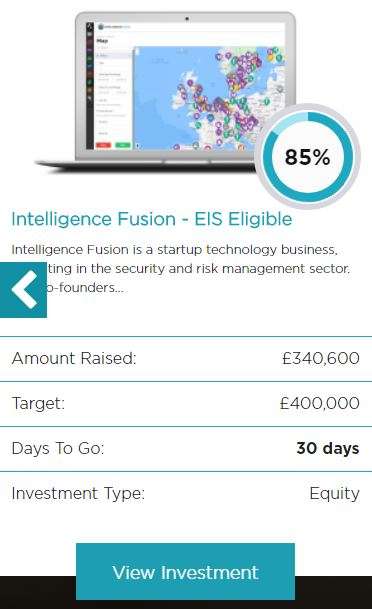 We are NEARING THE END OF OUR CURRENT investment fund RAISE. USE THE FOLLOWING LINK IF YOU WOULD LIKE TO INVEST
Back to Reports & Resources