Date of Report: Monday, 13 November 2017
Incident Date/Time: 07:00hrs, 02 NOV 2017 (GMT +8hrs)
INCIDENT DETAILS
Public tours of the Royal Crematorium at Sanam Luang, Bangkok began on 02 NOV 2017 with Princess Maha Chakri Sirindhorn officially opening the grounds to the public. About 30,000 people were present for the opening ceremony and as many as 100,000 people are expected to visit the exhibition each day.
Police have closed nine roads near Sanam Luang to facilitate visitors to the site until 30 NOV 2017. Shown in the imagery below, they are:
Ratchadhamnoen; Sanam Chai; Na Phra Lan; Na Phra That; Hab Phoei; Lak Muang; Kalayanamaitri, Saranrom; and, Rachini (McCabe and Harrington, 2017, Bing Maps, 2017, Google, 2017). 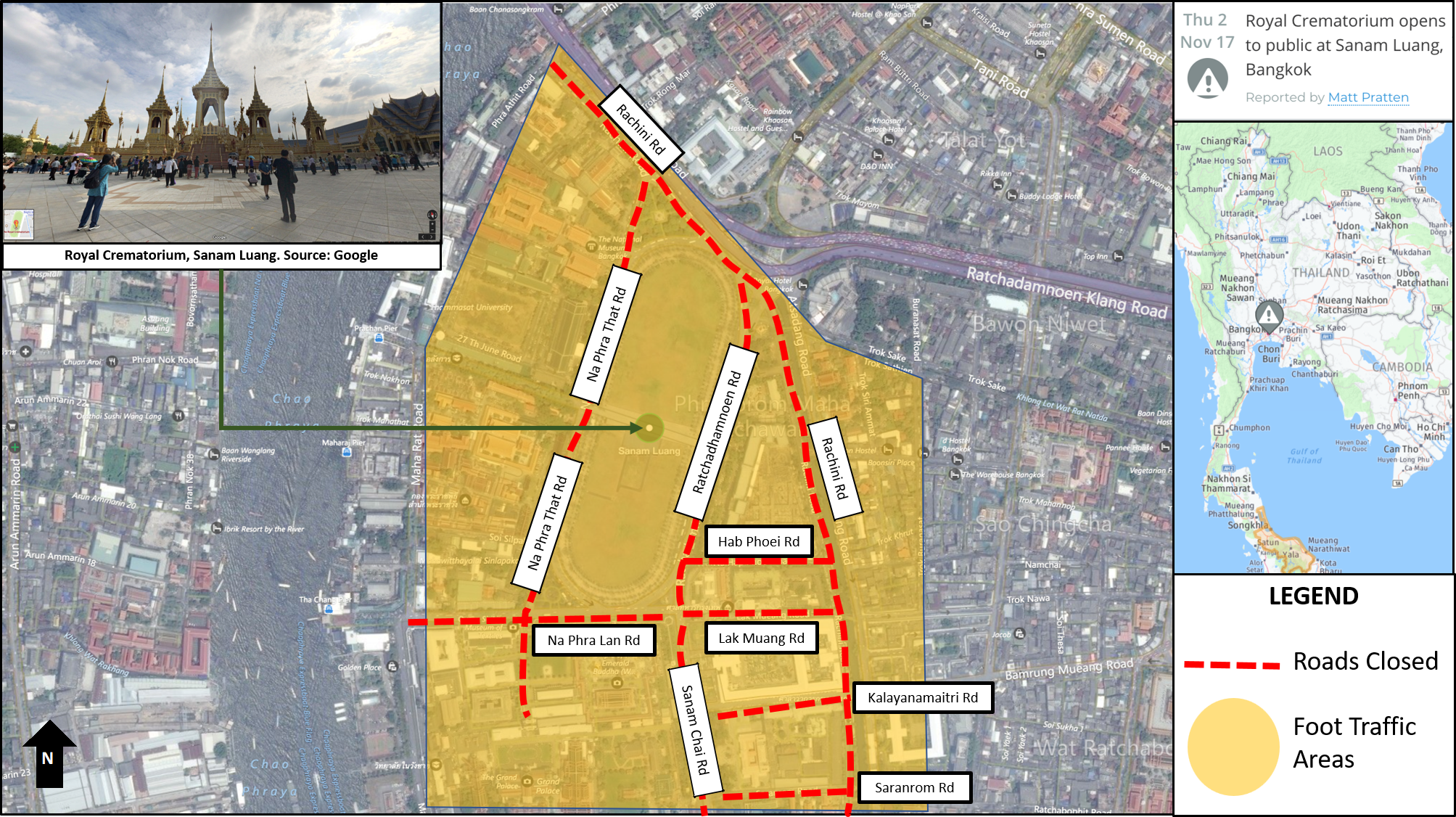 (Click on above image to expand)
COMMENT. Sanam Luang was the site of the Royal Funeral and Cremation of the late King Bhumibol Adulyadej; a highly revered monarch throughout Thailand. The Ceremonies that occurred from 25-29 OCT 2017 drew huge numbers of people to the area, closing down many of the roads. Prior to these ceremonies, his casket was able to be visited by the pubic in order to pay their respects for at least 12 months. As the period for viewing the casket drew to an end, the crowds attending the site became larger; with the last day of public viewing attracting the largest crowd of approximately 110,000 people (PRATTEN 2017).
With the expected crowd and subsequent road closures, the areas near these roads would be accessible by foot only. Assessed areas of foot traffic near Sanam Luang are shown above. Considering the turnout which occurred on the last day of public viewing, crowds could increase in size as the public tours draw to a close. COMMENT ENDS.
ASSESSMENT

While Sanam Luang can accommodate for up to 100,000 per day, it is POSSIBLE that as the public exhibition of the Royal Crematorium draws to a close, the size of the crowds visiting will begin to increase. Crowd numbers on or days before the 30 NOV 2017 will POTENTIALLY exceed 100,000 per day.
This makes it POSSIBLE that in addition to the road closures blocking vehicle access into this area, the size of the foot traffic will increase, making it more difficult to move around in this area.
Movement around this part of Bangkok will PROBABLY take much more time than usual until 01 DEC 2017 due to the road closures and people visiting Sanam Luang.
References
ï¿¼
BING MAPS. 2017. Bing Maps [Online]. Washington: Microsoft. Available: https://www.bing.com/maps [Accessed 13 November 2017].
GOOGLE. 2017. Google Maps [Online]. Mountain View: Google. Available: https://www.google.com.au/maps?hl=en&tab=ll [Accessed 13 November 2017].
MCCABE, M. & HARRINGTON, D. 2017. Intelligence Fusion Platform [Online]. London: Ambix. Available: https://www.intelligencefusion.co.uk/ [Accessed 12 November 2017].
PRATTEN M. 2017. Thailand Weekly Intelligence Report – 15 October 2017. Thailand [Online], 15 October 2017. Available: https://www.intelligencefusion.co.uk/single-post/2017/10/15/Thailand-Weekly-Intelligence-Report [Accessed 20 October 2017].
ï¿¼
Back to Reports & Resources