Since March 2017 more than 340 significant incidents that fall under the category of protests and demonstrations have been reported for India on the Intelligence Fusion platform. So far, in 2018 alone more than 160 protest related incidents have been recorded. This data shows that there has been a relative increase in the size and scale of protests across India during the period in question. Much like the rest of India, the state of Jammu and Kashmir witnessed regular incidents of stone pelting protests but these incidents generally take place in a different context and are mainly associated with terrorism and insurgency. However, the rest of India is also witnessing a rise in the number of protests for a variety of reasons. Whilst the majority of the protests have remained peaceful, many of the protests have turned violent or were violent from the very outset. This brief analysis will focus on some of the most significant protests in India in 2018 and will pay particular attention to the motivation for the protests. 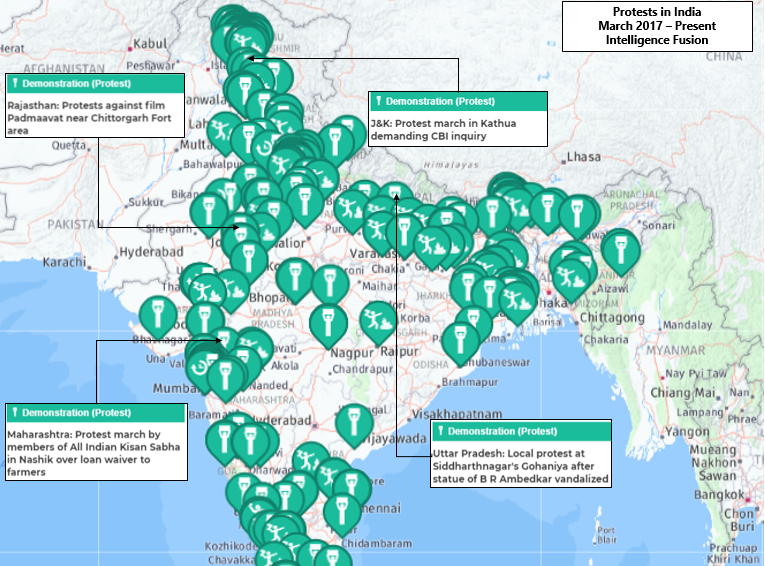 In January this year, in several central and western states of India including Haryana there was a continuation of violent protests that started in response to the release of the film Padmavat. The main opposition came from the Rajput community in the state of Rajasthan, and the protesters alleged that the film has depicted Queen Padmavati in a bad light. The protesters wanted to stop the release of the film and protested outside cinema halls and multiplexes where the film was to be projected across India. Members belonging to ‘Karni Sena’ are believed to be the main force behind the protests in Rajasthan. Several arson attacks took place on cinema halls, roads were blocked and public transport vehicles were damaged by protesters in several states. In Rajasthan, Madhya Pradesh and Gujarat, police struggled to contain the unrest.

In March farmers in the state of Maharashtra staged a massive protest march demanding a loan waiver from the state as crops were destroyed due to adverse weather and poor rainfall. Tens of thousands of protesting farmers took part in a massive rally to Mumbai from Nasik district covering more than 170 km on foot over five days. It is believed that members of the All India Kisan Sabha (the farmer’s wing of Communist Party of India-Marxist) were behind the protest march. Along with loan waivers, farmers demanded a set crop price from the Maharashtra government. Despite the size of the demonstration, the protest remained peaceful. Similar protests demanding loan waivers from many other farmer groups were reported in other states too for the same reasons. 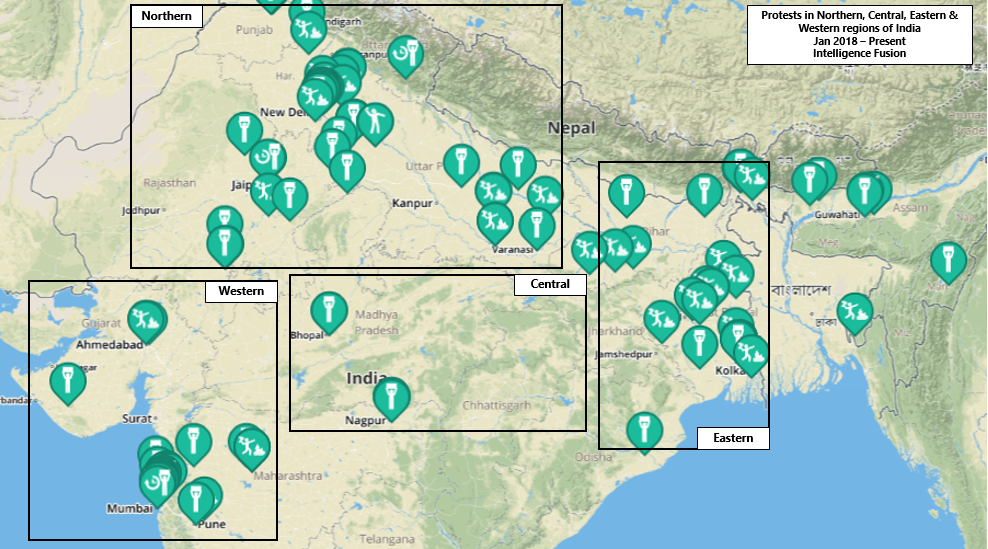 In April, India witnessed mass protest in several states against a Supreme Court ruling that many believed will dilute a stringent law that was enacted to address atrocities against Dalits or former untouchables. Although caste discrimination is outlawed in India, many Dalits feel that they are still discriminated against. However, the court viewed that the act was rampantly misused. Activists organised mass protests against the Supreme Court ruling across India. A nationwide shut-down called ‘Bharat Bandh’ was organised in which tens of thousands of individuals united for the protest. However, many protests did turn violent and a curfew was imposed to control the violence. At least eight people lost their lives and many were injured across several states. Protests were observed in states of Gujarat, Rajasthan, Uttar Pradesh, Bihar, Jharkhand, Haryana and Maharashtra. Supporters of ‘Bhim Sena’ were believed to be involved in many cases of violence. India’s main opposition Congress party supported the protest by criticising the ruling BJP and accused the BJP government of being anti-Dalit.

During mid-April, Kathua and Unnao rape cases triggered a series of protests across India. Protesters raised their voice against the gruesome incidents of rape and demanded that the government strengthen laws against the crime. Many protesters held the government directly responsible for the crimes. The public outrage in response to the rape cases were similar to that which was seen during the gang rape of a Delhi student on a bus in 2012. As part of the demonstrations, a sit in protest was organised by Delhi Commission for Women at Raj Ghat in New Delhi. Similar protests were organised by many citizens’ groups demanding justice for the victims across India. The widespread demonstration also demanded the death penalty in child rape cases. In response, India’s government approved the death penalty for convicted rapists of girls under the age of 12. Although, the Protection of Children from Sexual Offences (POCSO) Act does exist in India, it is reported that only 3% of cases convicted under the POCSO have ended in convictions and fast-track courts remain a non-deterrent to offenders.

India is likely to see significant numbers of demonstrations and protests in the upcoming months in response to perceived injustices. Besides that, as the Modi government will be seeking re-election next year, the opposition forces and political parties are likely to exploit such cases and incidents as a form of statesmanship to target the BJP government and will attempt to disrupt the law and security situation in many of the BJP ruled states in India. In this context, it is likely that further unrest will be reported throughout the year at a similar intensity to what has already been observed.