Date of Report: Saturday, 23 September 2017
Incident Date/Time: 06:15hrs, 22 September 2017 (GMT +7hrs)
EXECUTIVE SUMMARY
Given the absence of a claim of responsibility and the statement made by a senior BRN figure, it is POSSIBLE this attack was carried out by the BRN. Based on this attack and historical incidents in Pattani, it is PROBABLE the insurgents in this province are conducting their attacks with the same kind of methods seen previously, they do not appear to have increased in capability at this time.
INCIDENT DETAILS

(Click on above image to expand)
At approximately 06:15 hours on 22 SEP 2017, four Rangers were killed and six others wounded when insurgents detonated a remote controlled improvised explosive device (RCIED) on Highway 41 in Tambon Tabing, Sai Buri district, Pattani. The attack happened when the group of nine rangers from Ranger Task Force 44 were travelling in a pickup truck on a routine patrol near Ban Cho Kue Yae village in Tambon Tabing. They were patrolling the road providing protection for teachers.
The location of the attack was an area being dug up for the installation of water pipes. When the patrol arrived, the four rangers on the back dismounted to walk alongside the vehicle. As they proceeded, the RCIED â believed to have been hidden in a drainage pipe under the road â was detonated, killing four of the five rangers in the vehicle instantly and tearing the vehicle in two (see above imagery). A group of insurgents briefly opened fire before withdrawing from the area.
A plastic box containing electrical circuit boards and batteries was found near the scene of the attack (see above imagery). Police have said the RCIEDâs main charge was a gas cylinder packed with up to 80 kilogrammes of explosive and sharp objects. There has been no immediate claim of responsibility for the blast.
COMMENT. Rangers escorting teachers has been a common practice as insurgent groups have targeted teachers in the past (McCabe and Harrington, 2017, PRATTEN 2017a, Askew, 2008). In addition, the small arms fire would appear to be a means of covering the insurgentsâ withdrawal rather than following up with small arms fire to inflict more casualties.
The absence of a claim of responsibility for the attack is a common feature of insurgent attacks in South-East Thailand. Reporting from last week indicated that a senior figure from the Barisan Revolusi Nasional (BRN) told the media that this policy would continue. While there is at least one other active insurgent group in South-East Thailand â the Runda Kumpilan Kecil (RKK) â this statement along with the BRNâs standing as the most well-resourced insurgent group would provide a confirmation of sorts as to whom was behind this attack (PRATTEN 2017c, PRATTEN 2017d).
Examining previous Complex Attack incidents in Southern Thailand from 01 May 2017 to present (pictured below) indicates that Complex Attacks have predominantly been occurring in the surrounding provinces of Yala and Narathiwat. The Vehicle Borne IED (VBIED) attack to the West of this recent incident was the one VBIED that successfully hit a target during the Songkhla VBIED raids (PRATTEN 2017b). 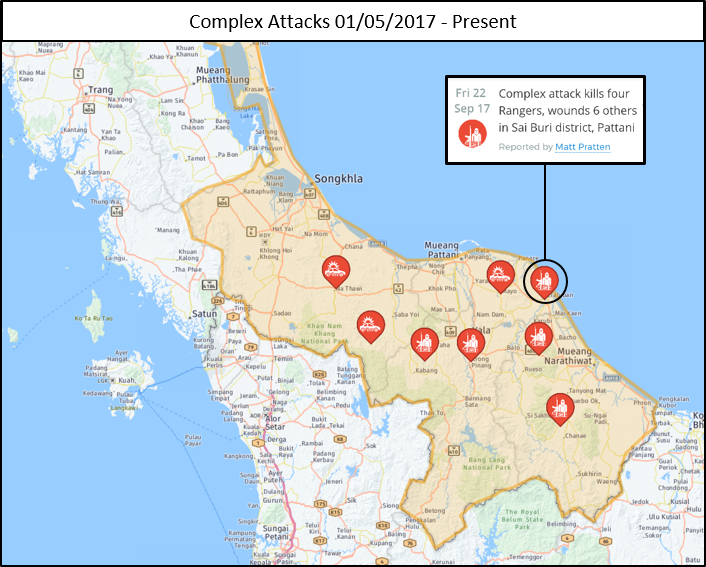 In the context of Complex, IED and Direct Weapons incidents (see below image), Pattani has not been an area where this kind of attack occurs regularly. Insurgents in this province have historically carried out IED or Direct Weapons attacks, not a combination that would equate to a complex attack. Their attacks have usually been most successful against teachers or civilians as opposed to ISOC personnel, Rangers or police.
Having said that, back in June 2017 there was an IED attack which killed six personnel travelling in a similar kind of vehicle in Thung Yang Daeng district, Pattani. As shown in the imagery below, the IED was buried in the ground at a location where the vehicle was passing through a choke point caused by the terrain â note the water on both sides of the road would force the vehicle to drive into the area the IED was placed â a similar scenario to this recent attack. The IED was of a similar construction, an 80kg main charge (McCabe and Harrington, 2017).

Given the absence of a claim of responsibility and the statement made by a senior BRN figure, it is POSSIBLE this attack was carried out by the BRN.
On the surface, this complex attack would indicate an increase in capability of insurgents in Pattani due to the absence of Complex Attacks in this province in the past. However, the nature of this attack would make this incident a Complex Attack due to a technicality; small arms fire followed up the RCIED detonation.
In this case though it appears the small arms fire was for the purpose of covering a withdrawal rather than a planned attempt to inflict more casualties; making this incident more of an RCIED attack. This kind of attack has been successfully carried out in this province in the past making it POSSIBLE this attack was carried out by the same group of insurgents who have been behind attacks in Pattani going as far back as 01 May 2017 and PROBABLY even before then.
Based on this attack and historical incidents in Pattani, it is PROBABLE the insurgents in this province are conducting their attacks with the same kind of methods seen previously, they do not appear to have increased in capability at this time.
References
ï¿¼
ASKEW, M. 2008. Thailand’s intractable southern war: policy, insurgency and discourse. Contemporary Southeast Asia, 30, 186+.
MCCABE, M. & HARRINGTON, D. 2017. Intelligence Fusion Platform [Online]. London: Ambix. Available: https://www.intelligencefusion.co.uk/ [Accessed 12 August 2017].
PRATTEN M. 2017a. Post Incident Report: Shooting Spree in Pattani Province, Thailand. Intelligence Fusion [Online]. Available: https://www.intelligencefusion.co.uk/single-post/2017/07/25/Post-Incident-Report-Shooting-Spree-in-Pattani-Province-Thailand [Accessed 26 July 2017].
PRATTEN M. 2017b. Post Incident Report: Songkhla VBIED Raids and Pattani Car Bombing. Intelligence Fusion [Online]. Available: https://www.intelligencefusion.co.uk/single-post/2017/08/18/Post-Incident-Report-Songkhla-VBIED-Raids-and-Pattani-Car-Bombing [Accessed 19 August 2017].
PRATTEN M. 2017c. Thailand Fortnightly Snapshot: Armed Conflict in Thailand. Intelligence Fusion [Online]. Available: https://www.intelligencefusion.co.uk/single-post/2017/07/24/Thailand-Fortnightly-Snapshot-Armed-Conflict-in-Thailand [Accessed 24 July 2017].
PRATTEN M. 2017d. Weekly Intelligence Report: Monitoring in Thailand – 18 September 2017. Thailand [Online], 16 September 2017. Available: https://www.intelligencefusion.co.uk/single-post/2017/09/17/Weekly-Intelligence-Report-Monitoring-in-Thailand [Accessed 18 September 2017].
Back to Reports & Resources