KEY FINDINGS
Based on the incidents reported by Intelligence Fusion over the last 50 days:
The threat to travellers in Moscow and St Petersburg is low. Based on historical data, the majority of incidents of criminality are located in the southern districts of Moscow, in particular Lyubilno District. It should be noted that there is a trend of crimes often taking place within residences and among relatives. Moscow is likely to be further affected by demonstrations, partially because of the domestic political turbulence, with Navalny likely to plan additional protests in the coming months, partially because of the social tensions in the Middle and Far Eastern immigrant communities.St Petersburg and Moscow are likely to continue to witness strict security measures, which have recently led to frequent closures of metro stations, nightclubs, educational establishments and shopping malls and therefore will impact transport and daily life of citizens.
Uncertainty Yardstick 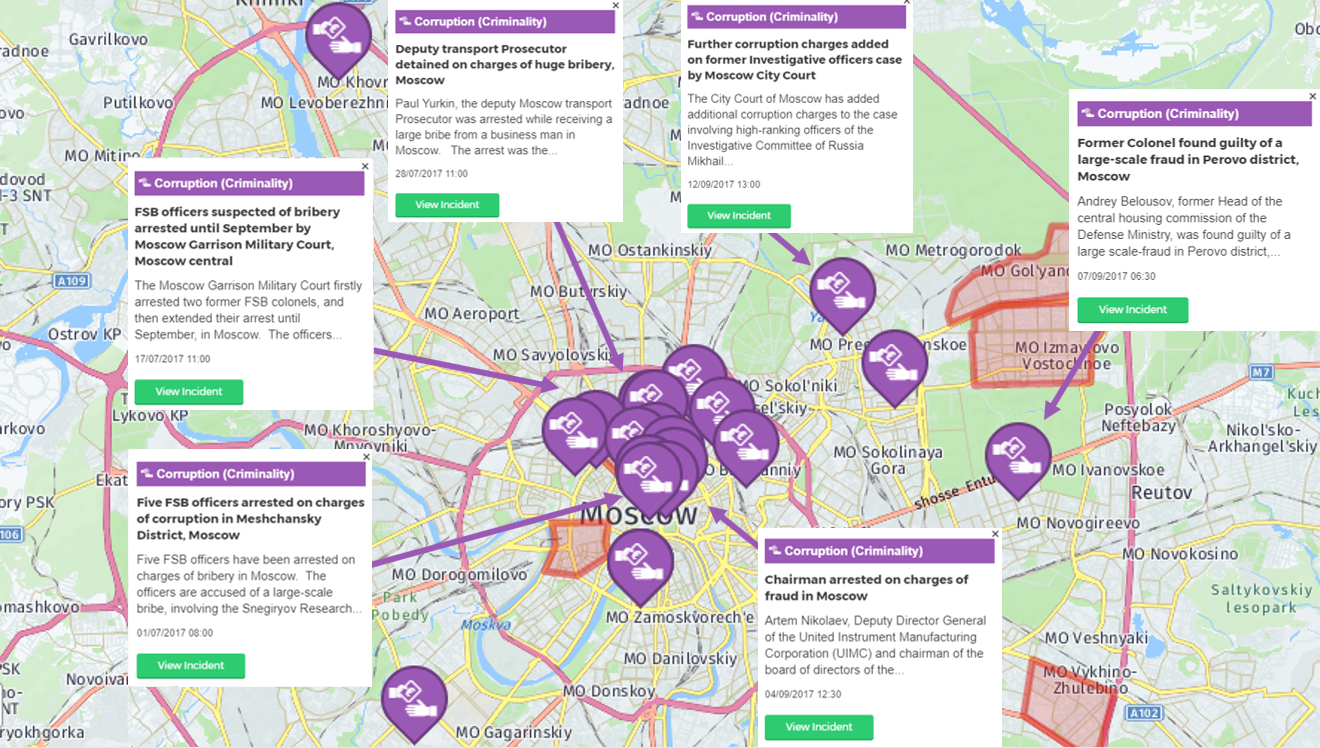 Corruption Incidents – Moscow. (Click on above image to expand)
In spite of the promises of a more severe crackdown on corruption and the measures taken by the Duma to facilitate the fight against bribery, not only have the trends in corruption not been contained, but they have also increased. A key feature of corruption in Moscow involves managers in public authorities. (See below chart). This aspect to corruption makes it difficult for anti corruption measures to take affect.
Other than a couple of cases which involved small scale fraud, the majority of cases reported involved executives and officials. These cases included:
Artem Nikolaev (Deputy Director General of the United Instrument Manufacturing Corporation, UIMC, and chairman of the board of directors of the Scientific and Research Center for Electronic Computing, NICEVT).Andrey Bardin (Director General of Rosneft-Sakhalinmorneftegaz).Officials such as FSB officers, bailiffs and investigators. For instance, there were cases of corruption reported involving Andrey Belousov (former Colonel and Head of the central housing commission of the Defense Ministry) and, above all, the Moscow head of Internal Affairs department in Yakimanka district, suspected of a massive corruption scheme.
COMMENT: As corruption is rooted in the ruling class, it is likely that the implementation of further measures (or, simply, the strengthening of the already existing ones) will not lead to the expected reduction in corruption, as it will be harder to apply against the establishment classes rather than small-scale criminals. COMMENT ENDS 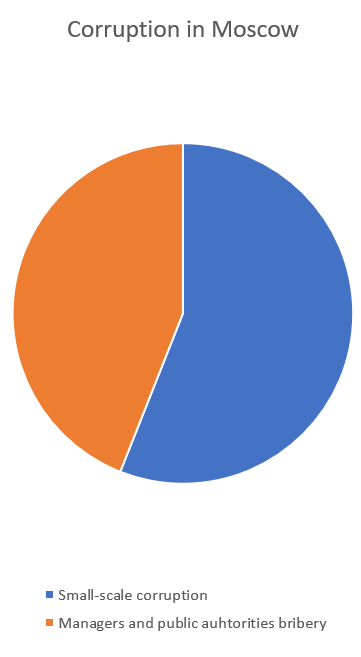 Corruption in Moscow, based on last 50 days incidents. 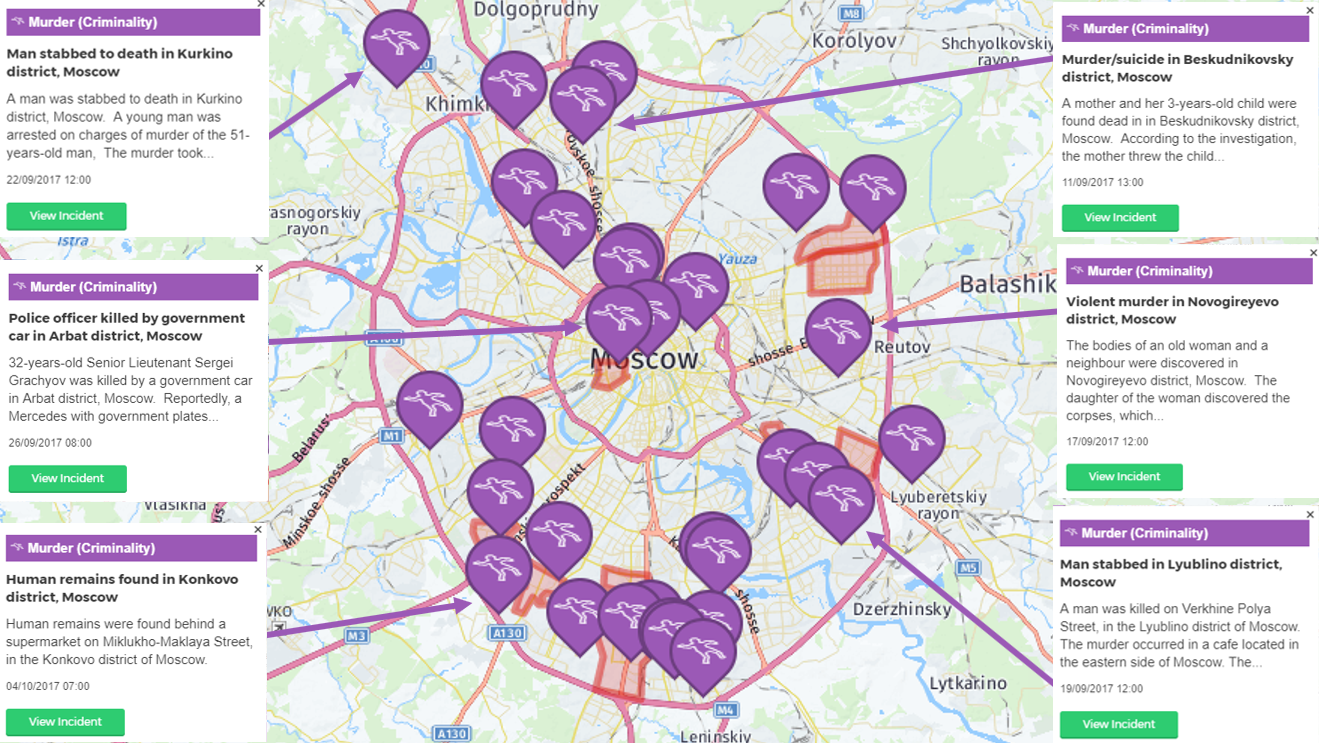 Murders – Moscow. (Click on above image to expand)
Over the last 50 days, the occurrence of murders has significantly increased compared to this summerâs trends. Looking at the murders reported by Intelligence Fusion, the most common pattern involves homicides by stabbing, typically caused by fights and quarrels resulting from alcohol intoxication. However, the last month and a half has also seen a considerable increase in terms of the discovery of human remains, especially in parks and apartments of the southern districts of the Russian capital; in particular, the Lyublino district has experienced an unprecedented increment in murderous crimes. The high-profile murders have concerned: a violent murder/suicide case in Beskudnikovsky district (a man killed his ex-wife and then committed suicide); the discovery of the body of Tarlan Gamidov, brother of notorious thief Alibala Gamidov, in his apartment; a case of the violent murder of a 29-year-old, found with chopping wounds to his head; finally, a police officer allegedly killed by a government car in Arbat district. It is indeed in Arbat, as well as central and the northwestern districts of Moscow, that the most violent murders are concentrated. Although most of the murders â especially the ones caused by stabbing â occurred during the night, the risk posed by walking alone during night remains moderate/low, as the majority of the reported incidents involved murders which took place within residences and were linked to domestic disputes â therefore not random targets. 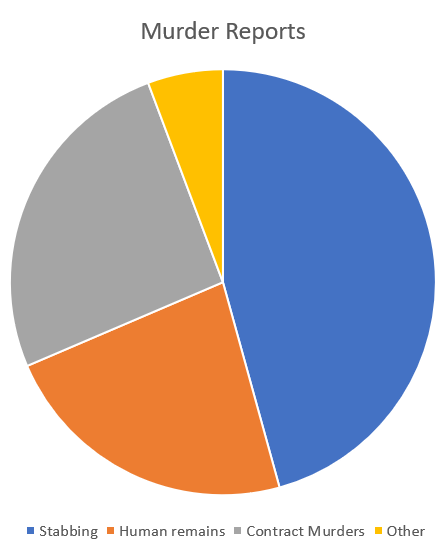 Murders in Moscow, based on last 50 days incidents. 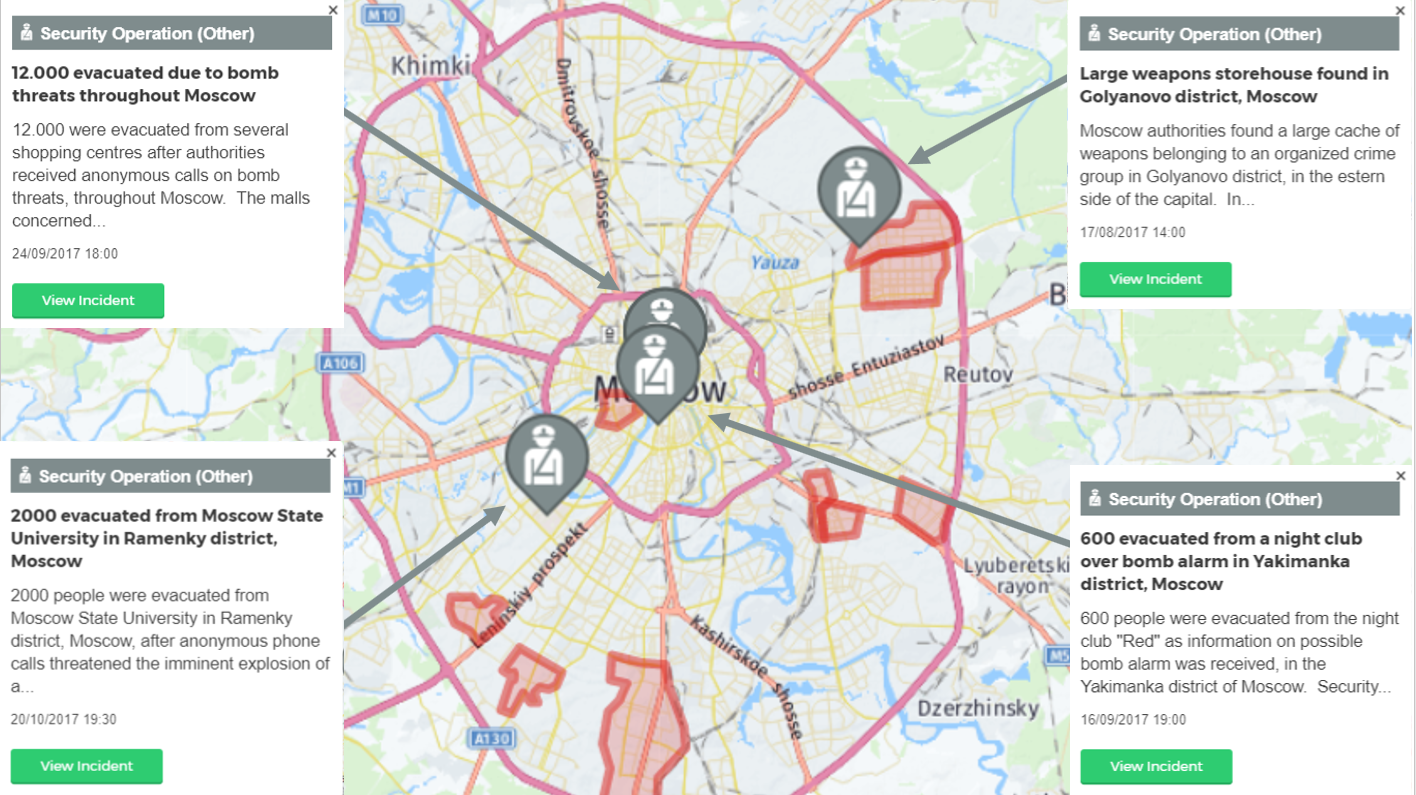 Security Operations – Moscow. (Click on above image to expand)
Over the last 50 days, Moscow has experienced an unusual series of mass evacuations resulting from hoax bomb calls. Such events, which also occurred in St Peterbsurg (although to a greater extent), have recurred with a peculiar regularity and seem to be linked. The most significant incident involved up to 12,000 people being evacuated from some of the largest malls throughout the city, such as MEGA Kihmki (Khimky region, northwestern Moscow), Metropolis (Voykovsky district, western Moscow), Chorosho (Khoroshyovsky district, western Moscow), Capitolium (Orekhovo-Borisovo Severnoye district, southern Moscow), Shchuka (Shchukino district, southern Moscow) and Oceania (Fili-Davydkovo district, southwestern Moscow).
Other evacuations took place in Yakimanka district, where 600 people were forced to leave the popular nightclub “Redâ, and more recently in Ramenky district, where 2,000 were evacuated from Moscow State University. Although such hoax bomb calls have been linked to the IS-related terrorism, it has been speculated that these were actually massive security drills, aimed at testing the endurance and the effectiveness of the current security measures, and of course training the authorities to manage a potential crisis efficiently, however, this is not confirmed. In either case, it is hard not to notice a certain symmetry with the similar and more numerous related cases occurred in St Petersburg. Either genuinely promoted by Islamic terrorism or triggered by the authorities as security exercises, these incidents are likely to be repeated in the next few months â because of the potential upsurge of lone wolves and foreign fighters returning from the Syrian war theatre now that IS has been allegedly neutralized. 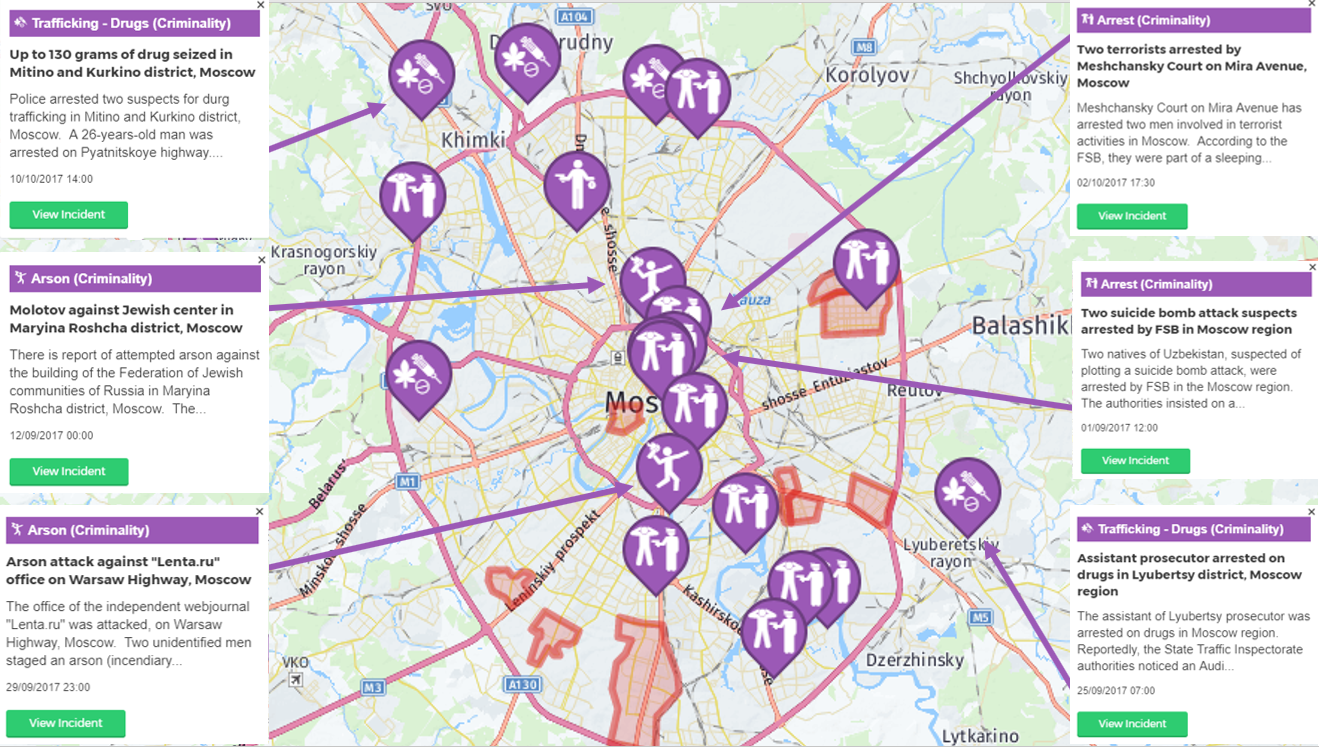 Criminality – Moscow. (Click on above image to expand)
Over the last 50 days, the incidence of crimes related to drug trafficking has decreased and was mainly focused in the outer areas of Moscow. The most relevant of the cases involved the assistant of the Lyubertsy prosecutor, who was arrested by the State Traffic Inspectorate (after the authorities noticed an Audi car driving dangerously, they conducted searches and found out the driver was allegedly the assistant prosecutor, who was high on drugs and whose name was not disclosed). There have been two major arson attacks, one against the building of the Federation of Jewish communities of Russia in Maryina Roshcha district, the other against the office of the independent webjournal “Lenta.ru” on Warsaw Highway, which was also vandalized with Nazi symbols. There was also the detention of two natives of Uzbekistan who were planning terrorist attacks in the capital. In particular, one of the two terrorists, Murdobek Kodirov, had previously already faced a prison term of more than three years, and according to the prosecutor, was an active member of Islamic State, from which he received last August instructions conduct a bombing in a crowded area of Moscow.
The reported incidents mainly occurred in central Moscow, although it is unlikely to identify patterns due to the various nature of the crimes indicated. 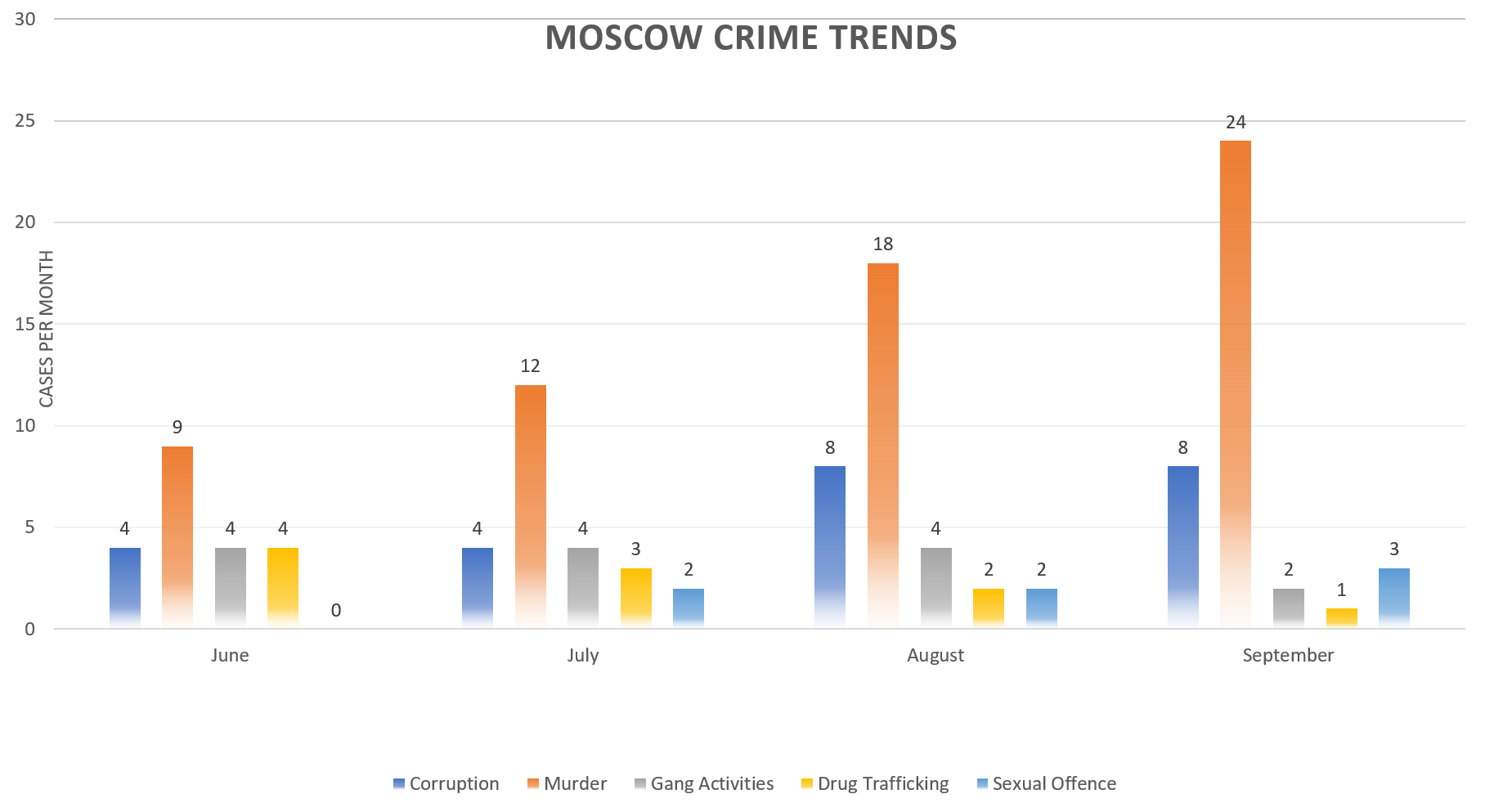 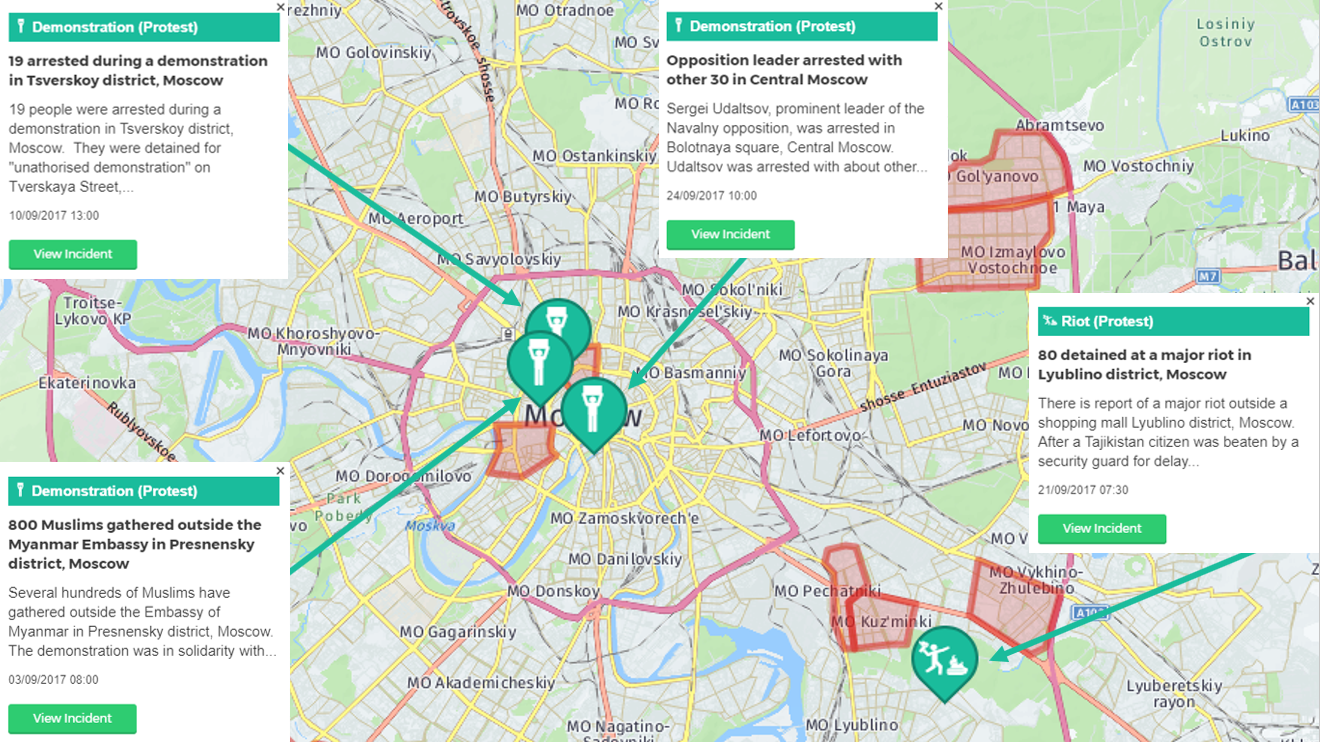 Demonstrations – Moscow. (Click on above image to expand)
Over the last 50 days, there has been an increase in protests and demonstrations. This increase appears to have relaunched this summerâs wave of demonstrations (and subsequent arrests), when the opposition leader Aleksey Navalny organised multiple marches throughout the Federation to protest against the government. While Navalny was arrested once again while heading to Novgorod to attend an âunauthorisedâ rally, another two anti-government demonstrations were conducted in the capital: one took place on September 24th, led by Sergei Udaltsov (prominent leader of the Navalny opposition), who was arrested in Bolotnaya square, Central Moscow; the other marched along Tverskaya Street (Tsverskoy district), resulting in the arrest of 19 after clashes between demonstrators and the police. However, Moscow has also experienced non-anti government demonstrations. On September 3rd, 800 Muslims gathered outside the Myanmar Embassy in Presnensky district to sympathise with the Rohingya Muslims, who are being persecuted and whose condition possibly worsened last week, due to a more severe crackdown of the Myanmar government forcing hundreds of thousands to seek refuge in Bangladesh. Demonstrators have been praying in front of the Embassy, shouting “Allahu Akbar” and displaying banners “Stop genocide of Muslimsâ; however, notwithstanding the large number of demonstrators and the heavy deployment of police (at least 20 police cars and one armoured vehicle have been seen in the area), there has not been any incident nor public order violation. Another major incident took place in Lyublino district, where a riot arose outside a shopping mall after security guards beat a Tajikistan citizen who refused to pay the rent. Several immigrants gathered outside to protest against the violence, but soon after the protest turned into a riot between demonstrators and security guards (80 were detained). This incident, along with the increase in crimes previously mentioned, has rendered Lyublino one of the least safe districts of the Russian capital, crossed by social tensions and relatively high indicators of criminality.
ST PETERSBURG 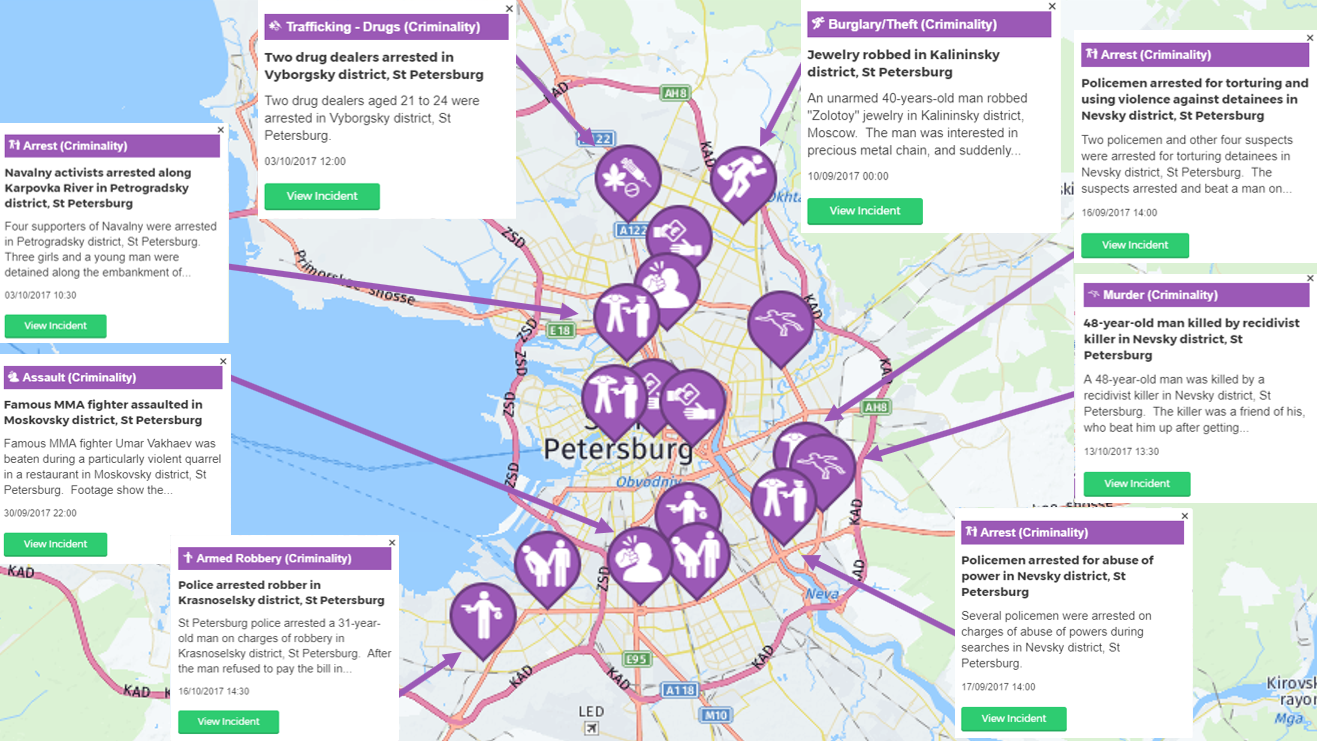 Criminality – St Petersburg. (Click above image to expand)
Although generally more contained than in Moscow, over the last 50 days crime in St Petersburg has slightly increased. Cases of corruption reported by Intelligence Fusion were rare but high-profile, involving high-level executives and managers. There has been a slight increase in sexual offence cases, involving a brothel located and closed by St Petersburg police and a young girl repeatedly sexually abused and then robbed by two men in Frunzensky district. Small-scale robberies and assaults were unusual recurrent cases of alleged abuses of power by the police, whose agents were subject to Russia MIA investigation. A couple of them were arrested for torturing detainees. Finally, there have been several arrests of pro-Navalny supporters, who gathered demanding the release of the opposition leader and were later detained on the embankment of Petrogradsky district. 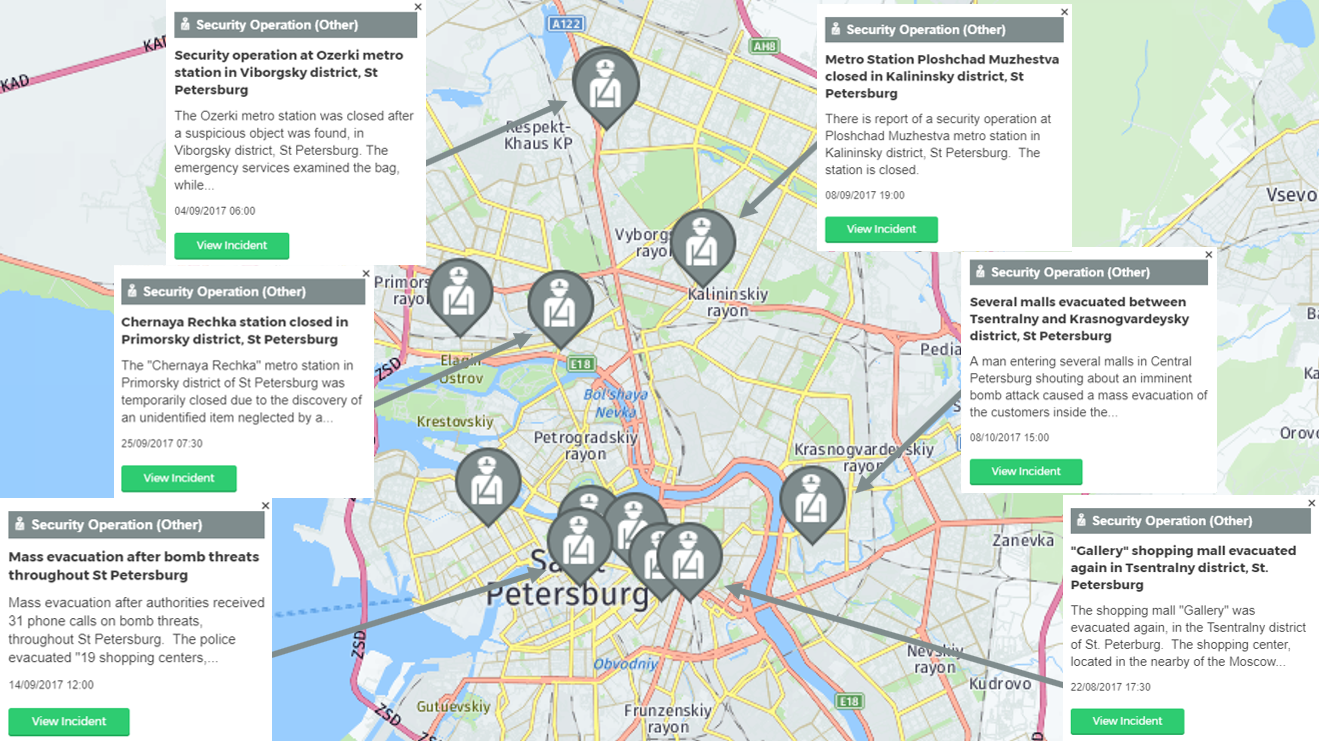 Security Operations – St Petersburg. (Click on above image to expand)
The most significant and recurring type of incident in St Petersburg were security operations affecting the daily life of the city. After St Petersburg was targeted by IS-related terrorism last Spring, security measures have been deeply strengthened to such an extent that the high alert has turned into widespread paranoia. For instance, there has been a significant surge in security operations in metro stations, often closed to conduct checks on bags or other unidentified items left unattended, which later turned out to be harmless. The high alert following last April’s metropolitan bombings pushed the authorities to enhance rigid security checks and close entire metropolitan lines, sometimes for hours, causing delays and difficulties to business people and commuters, also impacting traffic. Such high tension reflect the major efforts of the FSB in countering and dismantling terrorist activities aimed at crowded areas of the city. Although few details were disclosed, the authorities informed the media that, over the last 2-3 months, a number of IS fighters were prevented from committing terrorist attacks and detained while still planning bombings. The failure of the terroristsâ attempts has led to a change of strategy: phone calls targeting the main shopping centres. In fact, there has been an unusually high number of mass evacuations from the main malls of the city, after a series of anonymous phone calls threatened bombs were about to explode. Thousands were evacuated, aggravating the already widespread fear. The alleged defeat of IS in Middle East is unlikely to decrease the city’s status as a likely target for the Islamic terrorism. Instead, it should be expected that cases such as metro station closures and mass evacuations from crowded areas are likely to repeated in the short-term.
Back to Reports & Resources