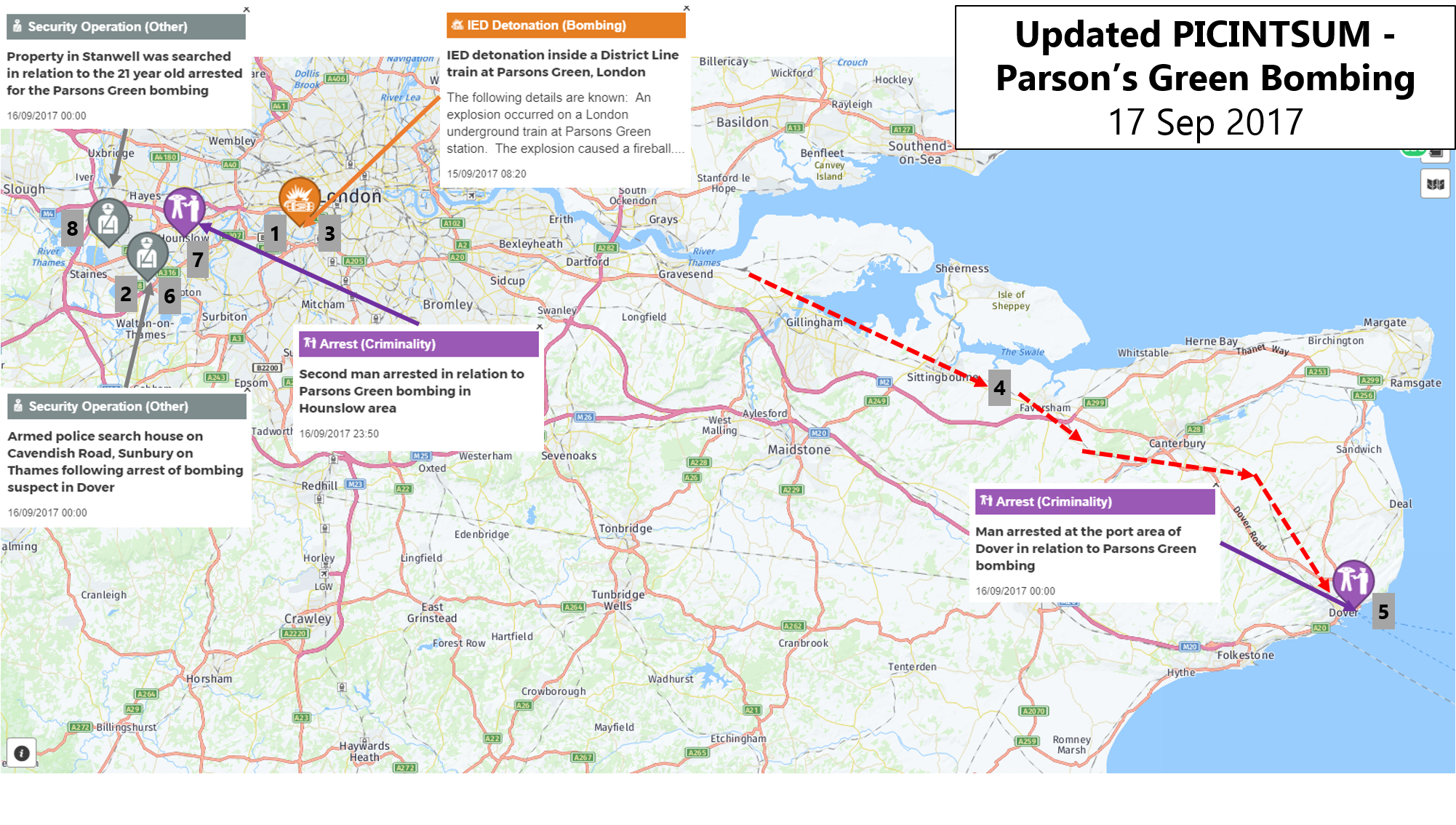 (Click on above image to expand)
1: Approx. 1 Sep 2017: The alleged 18 year old future terrorist is allegedly arrested at Parsons Green station for unknown reasons and returned to his foster parents in Sunbury on Thames. COMMENT: The facts of this arrest will be key to understanding if more could have been done to prevent this attack. COMMENT ENDS The teenager is believed to be a problematic foster child, who either arrived at the foster home two weeks prior to the attack, or five years prior based on witness statements. COMMENT: Based on the quantity of firearms and the bomb that are later found at the home it seems unlikely that these were obtained in the course of two weeks. COMMENT ENDS
2: 15 Sep 2017 pre 0820hrs: 18 year old alleged attacker, left his foster home in Sunbury on Thames. He boarded the train which was later bombed and placed the device. COMMENT: Based on the state of vigilance for suspicious packages, it seems that the device was placed and the timer set only a short period before it detonated, perhaps the station prior or at Parsons Green station, allowing the 18 year old alleged terrorist to get off the train before it detonated. COMMENT ENDS
3: 15 Sep 2017 0820hrs: While the train was stationary at Parsons Green station, an IED placed in the gangway near the doors detonated, possibly only a partial detonation. The explosion caused a large fireball injuring 30 people. COMMENT: Based on the images available the IED appears to be crude, likely using a low explosive, not TATP which has been commonly used in recent attacks in Europe, with a timer initiator. COMMENT ENDS
4: 15 Sep 2017 post 0820hrs: The 18 year old alleged terrorist used rail transport to get to Dover Priory Railway Station. COMMENT: It is not known whether the 18 year old stayed in London, or at a location en route to Dover or in the Dover area prior to being arrested the following day. COMMENT ENDS
5: 16 Sep 2017 0750hrs: The 18 year old travels to Dover Port where he is arrested by police while buying a ticket.
6: 16 Sep 2017: Police raid the foster home of the terrorist and find 15 firearms, as well as a bomb in the garden.
7: 16 Sep 2017: Police arrest a 21 year old man under Section 41 of the Terrorism Act 2000 in Hounslow. Section 41 states âA constable may arrest without a warrant a person whom he reasonably suspects to be a terrorist.â
8: 16 Sep 2017: A property in Stanwell is searched following the arrest of the 21 year old. COMMENT: It seems likely that this is the 21 year oldâs residence. The proximity to London Heathrow Airport is worrying. Police will be likely looking for any connections between the 21 year old and the airport. COMMENT ENDS
Islamic State later claim responsibility for the attack, although provide no details of the incident that suggest involvement or prior knowledge.
Back to Reports & Resources