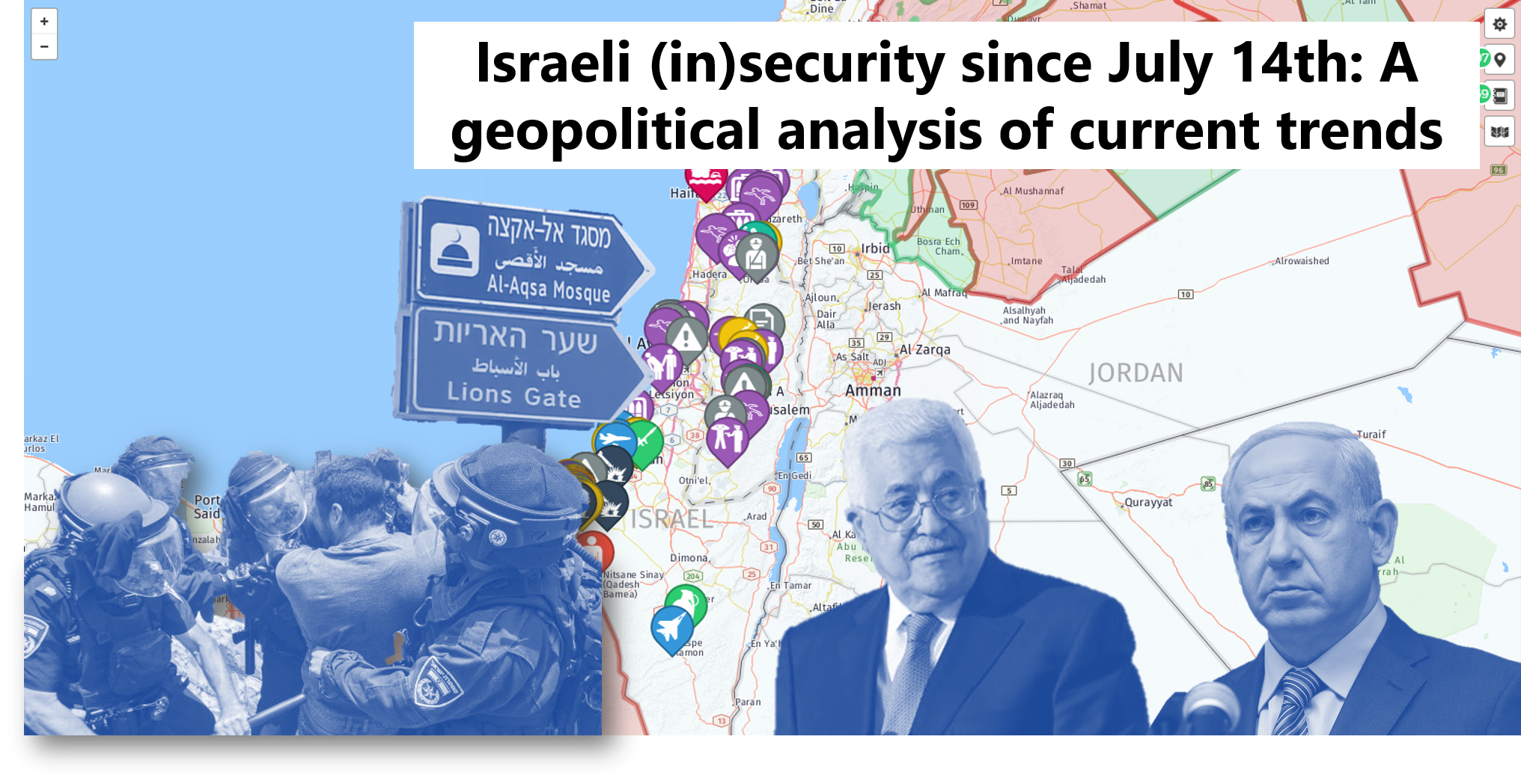 by Ajdin Dautovic
On July 14th 2017, Three Palestinian-Israeli men shot dead two Israeli police officers in the Haram al-Sharif complex â one of Jerusalemâs most holy and sensitive sites. The King of Jordan, Abdullah II bin Al-Hussein, is the custodian over the complex which houses the Al-Aqsa Mosque and the Dome of the Rock. Both of these sites are extremely important to Muslims while the Western Wall remains equally significant to Jews. The follow out of this act of violence led to a temporary ban on worshippers utilizing the complex, and the installation of metal detectors at the gates of the complex. Such a reaction from the Israeli government prompted massive Palestinian protest, and even further incidents of violence. The murder of the two Israeli officers has resulted in a massive deterioration of Israeli-Palestinian relations, and caused geopolitical outcomes which threaten Middle East peace, and security. Most of all, three areas of concern can be seen currently: 1) Israeli-Palestinian security cooperation is deteriorating; 2) the Arab-Israeli conflict will continue; and 3) Israel will face increased pressure externally to deal with the Palestinians.
On July 23rd 2017, Defense Minister Avigdor Liberman stated Israel will be able to deal with security issues without coordinating with the Palestinian Authority.[1] This statement came before recent Israeli airstrikes on Gaza, the Israeli discovery of an Iranian long-range missile production facility in northwestern Syria, and waves of violent attacks from Palestinians and coercive counter measures from the Israeli government. The security coordination has been fragile for long, but the continued pressure now will only serve to place Palestinian Authority President, Mahmoud Abbas, in a tough position politically. In a poll from 2016, 65% of Palestinians wanted Abbas to resign.[2] Today, the trend is not positive and Israel, and the world, risk losing a partner in the conflict. The current security environment is dictated by an outdated Oslo Accords framework which has placed strain on Palestinians to gain autonomy, and placed Israelis in a position of retaining more security responsibilities towards a population that does not welcome them. This situation carries high political and military risk and is one that must be further monitored in the Israeli-Arab conflict context.
The Israeli-Arab conflict will reach its 70th year in May 2018. It has withstood shifting geopolitical alliances, the end of the cold war and the beginning of the era of terrorism, rapidly changing economic markets within the Middle East and Africa, and today it remains the conflict which is sought after by diplomats as their golden trophy to be solved. However, despite many European states incrementally adjusting their pro-Israeli viewpoints, the issue of Israelâs legitimacy amongst states like Qatar, Saudi Arabia, Syria, Bahrain, the United Arab Emirates, Oman, and Iran remains little to non-existent. Likewise, the conditions of a renewed Arab Peace Initiative do not presently exist, although Gulf states do conduct business and trade covertly. Ultimately, this is changing because Gulf states are seeing the economic value of dealing with Israel but are placed in a difficult position due to having to appease their local populations and their Palestinian sympathies. Nonetheless, the ultimate player, Israel, under its current administration, does not see the Palestinian issue of sovereignty as resolvable and thus the Israeli-Arab conflict will continue into another decade. As this stalemate continues, protests will erupt, Israeli security will be threatened internally and externally, and Israel will face a continued battle for international legitimacy from state and non-state actors.
The Netanyahu led-government of Israel has taken notice of the disenfranchisement of Palestinians within Israel proper, the West Bank and Gaza. Likewise, they have noticed that Israel still faces challenges to its international legitimacy and have taken a strong line against any of those who criticize them â even its own allies such as the United States, the European Union and its member states like Germany and Sweden. As events such as the July 14th shooting on the Haram al-Sharif complex have shown, Palestinian discontent will only increase after repressive measures are taken. States like Turkey, Iran, and a joint statement from 57 member states of the Organization of Islamic Cooperation have condemned âIsraelâs recent provocative actionsâ at the holy site and the measures taken.[3] All these events, alongside the controversial nation-state bill being reviewed in the Knesset, are pointing to an Israeli government which is feeling insecure â politically and militarily â as it faces challenges from within and abroad. Benjamin Netanyahuâs immediate goals are to revitalize the economy, gather international support for his policies domestically, avoid the issue of settlements and Palestinian sovereignty, and ultimately ensure the safety of Israelis as fears of a Hamas, Iranian or Hezbollah attack remain a constant fixture in the psyche of the prime minister and people. Therefore, the intersecting aspects of failing Israeli-Palestinian security cooperation, an everlasting Arab-Israeli conflict, and the continued international legitimacy battle facing Israel all point to trends which need to be carefully monitored due to the geopolitical spillover effects it may have in the region.
[1] âLiberman: Israel can manage without Palestinian security cooperation,â Times of Israel. http://www.timesofisrael.com/liberman-israel-can-manage-without-palestinian-security-cooperation/
[2] âPoll: 65% of Palestinians want Abbas out,â AI Monitor.
http://www.al-monitor.com/pulse/originals/2016/06/palestine-65-want-abbas-resign-president.html
[3] âMuslim states slam âprovocativeâ Israeli actions at Temple Mount,â Times of Israel. http://www.timesofisrael.com/muslim-states-slam-provocative-israeli-actions-at-temple-mount/
Back to Reports & Resources