Late on the 20th of January 2018, five armed men attacked the five star Intercontinental Hotel in Kabul and were armed with AK-47’s and hand grenades, killing approximately 43 people. As well as Afghan citizens, Ukrainians, Venezuelans, Kyrgyz and Greek nationals were amongst the dead. The attack began in the kitchen/restaurant area and a survivor of the attack claimed that the attackers were wearing ‘stylish clothes,’[i] suggesting the attackers may have been pretending to be guests in the hotel before the attack. The attackers allegedly had asked a waiter for water for their table before they started shooting. Other reports claimed that the attackers forced their way into the hotel through the kitchen area entrance to begin their attack. After opening fire on guests in the restaurant, the attackers began moving through the hotel shooting guests. A large fire was seen on the 4th floor which quickly spread to the surrounding area of the hotel. Reports suggest that the attackers were using a thermite type explosive to burn down doors, which may have contributed to or started the fire seen in photos and videos.[ii] 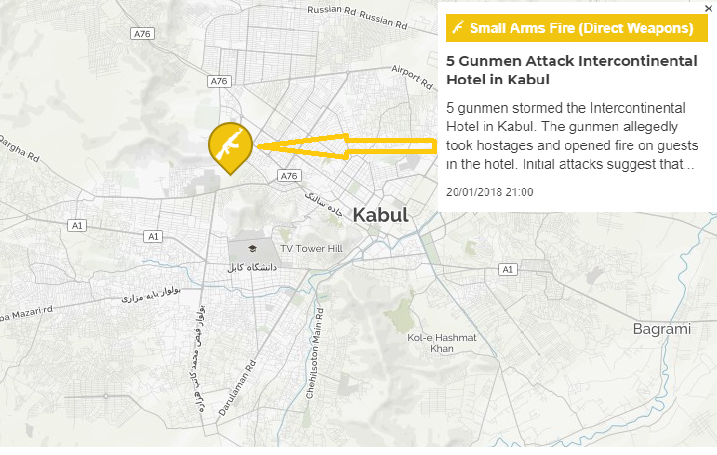 The Taliban claimed responsibility for the attack shortly after the siege ended through their spokesperson, Zabihullah Mujahid.[iii] The statement claimed that five gunmen had attacked the hotel and targeted foreigners and employees of the Afghan government. In another statement, the Taliban claimed that the attack was due to take place on Thursday but was postponed due to a series of weddings taking place in the hotel.[iv] This postponement highlights the Taliban’s continuing desire to appear legitimate in the eyes of their supporters and onlookers by avoiding casualties amongst Afghans. However, weddings were still taking place in the hotel at the time of the attack. The same statement appears to claim that one of the attackers lived in Kabul prior to the attack. If true, it can be assumed that the attackers knew the city, and possibly the hotel well. High profile government figures were allegedly specifically targeted, including the Afghan Counsel General in Karachi who was killed in the attack. A number of provincial officials were also staying in the hotel at the time of the incident for a conference held by the Telecommunication Ministry. Despite claims that NUG staff and foreigners were targeted, numerous civilians unaffiliated with the government were also killed, including both Afghan and foreign members of staff for the Afghan KAM Airlines company. The attack on the hotel fits within the Taliban’s broader anti-foreigner and anti-government rhetoric.

A warning was published on the US Embassy in Afghanistan website on the 18th of January, warning US citizens about the possibility of an upcoming attack.[v] Whilst the warning did not single out the Intercontinental Hotel as under threat (it did mention the Hotel Baron) it did say that groups may be planning an attack on areas where foreigners congregate.

Security forces arrived on the scene within an hour, with units from the Afghan Police Crisis Response Unit (CRU) being the main combatant and glimpses of foreign special forces being seen on site. The Kabul-Balkh Security company responsible for the hotels security allegedly did not engage the attackers. 1 of the attackers was killed by police who responded to the incident shortly after the attack began. Upon arrival, special forces engaged the attackers and began to enter the hotel, killing 2 attackers on the 2nd floor. Gunfire could be heard sporadically throughout the 17 hour siege as the gunmen controlled part of the hotel. The rest of the attackers are believed to have been killed during the fire fights which took place throughout the night in the hotel. 6 members of the security forces were wounded during the siege.

The hotel has traditionally been a popular site for foreign visitors In Kabul, and as a result appears to be a target for attacks such as this. The hotel had been attacked previously by the Taliban in 2011, in which 21 people were killed. Since then, the hotel’s security has been improved. Responsibility for protecting the hotel recently fell into the hands of a private security firm, Kabul-Balkh Security Company, who took over from the police three weeks before the attack. Despite the stated increase in security around the hotel, reviews from guests at the hotel have in the past referred to sub-par security measures. A review of Tripadviser from 2014 for example described the hotel’s security perimeter as ‘not very impressive from the back of the hotel.’[i] Tolo News also quoted a local as saying that cars with blacked out windows are not checked when they enter the hotel.[ii] With the hotel not being in the ‘Green Zone‘ where most embassies are found, it presents a comparatively softer target than other high profile targets such as a nations embassy or consulate.

Concerns have also been raised about the high ground over looking the back of the hotel, and whether this can be used to attack the hotel with direct fire. However, the position (pictured below) is occupied by security forces (the strength of the security forces on the high ground is not clear) and the hill does not appear to feature in the events of the attack on the 20th.

Kabul is considered to be the safest city in Afghanistan, and the significant security forces presence reinforces this impression. Kabul already has a ‘Green Zone’ which encapsulates the diplomatic area of the city and is considered the safest part, despite a large suicide truck bomb detonating in the Green Zone in May 2017. The National Unity Government (NUG) has pledged to expand the Green Zone, but the actual improvements this has produced are yet to bare fruit, with lack of funding slowing the project down.[viii] The rest of Kabul is further protected by multiple layers of checkpoints, often termed the ‘Ring of Steel’ which consists of approximately 26 checkpoints, each guarded by around 15 police officers. The static checkpoints are then further augmented by mobile checkpoints. At 4 of the checkpoints, a 30 tonne scanner (donated by China) can be found, although a report from the Afghan Analysts Network quotes locals as saying that the police sometimes do not scan any vehicles at busy times.[ix]

Despite numerous checkpoints and the existence of the ‘Green Zone,’ Kabul has still witnessed numerous attacks such as that in the Intercontinental Hotel in 2017 alone. For example, using data gathered by Intelligence Fusion, the below image shows that approximately 50 IED and suicide attacks took place in Kabul in the course of 2017 (excluding discoveries of IED’s and prevented attacks.) 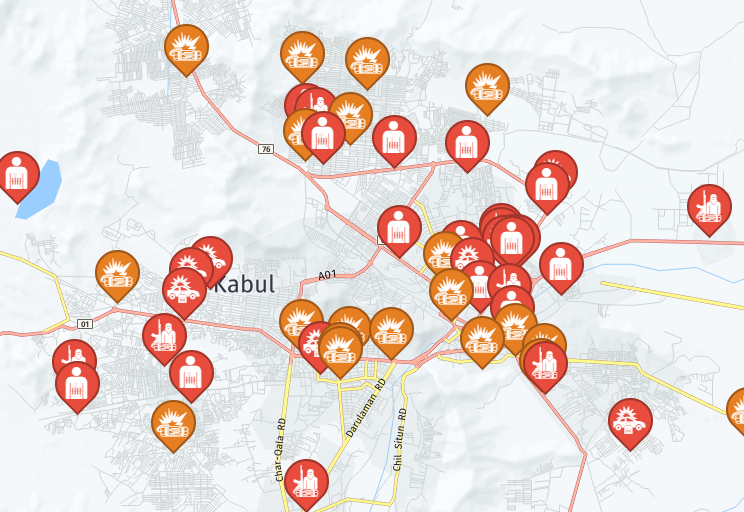 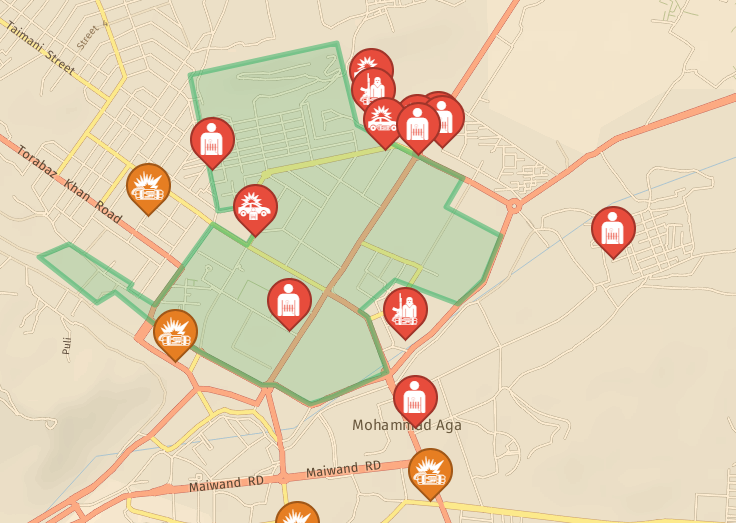 The above image shows the location of IED and suicide attacks across Kabul as well as highlighting the volume of attacks. Whilst it is clear that there have been numerous incidents, the image also shows that no major attacks have taken place in the Green Zone except for 1 which took place in October 2017 on Street 14 in the Wazir Akbar Khan area. The street is used by Afghan staff working within the Green Zone and the first checkpoint along this route has been described as lax.