On Tuesday August 15th, 2017, members of Indonesiaâs counter-terrorism unit, Densus 88, arrested five suspected Islamic terrorists in three separate locations in Bandung, West Java. Police have said that the five are part of Jemaah Ansharut Daulah (JAD), a terror network formed in 2015 in Indonesia composed of various factions across the country. This group has pledged allegiance to the Islamic State, and were responsible for the January 2016 terror attack in central Jakarta, in which 4 civilians were killed and 25 wounded by a suicide bomber and gunmen. The group was identified as a âSpecially Designated Global Terroristâ group by the U.S. State Department in January of 2017[1].
Among the five were a couple, arrested in the Kiaracondong neighborhood of Bandung, who had been deported from Hong Kong 3 years ago for spreading radical ideology. From their house, police recovered containers filled with a chemical liquid[2]. The other suspects were arrested in areas of Bandung not far from the house. Police have said that the group studied bomb-making through a blog run by Bahrun Naim, an Indonesian fighting for the Islamic State in Syria.
A spokesman for the provincial police informed reporters that this may be the first time that bombs made for attacks in West Java employ a tactic of using chemicals[3].
Regarding targets for their attacks, the plan was to attack the Presidential Palace in Jakarta, as well as the Police Mobile Brigade Corps headquarters in Depok, West Java[4], with one news source saying police headquarters in Bandung was also a target[5]. 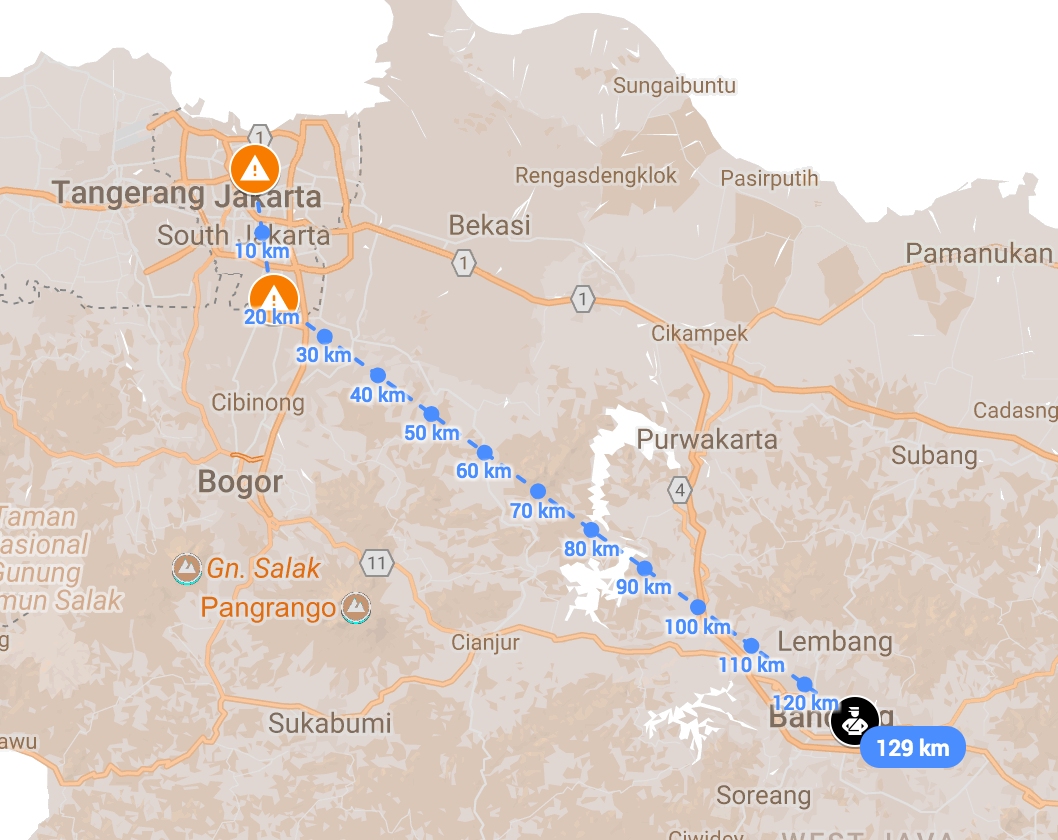 Orange markers represent targets, while the black marker represent where the arrests took place. Top orange marker is the Jakarta Presidential Palace and the bottom orange marker is the Police Mobile Brigade headquarters.
Analysis
Since the beginning of the year, dozens of suspected Islamic terrorists have been arrested across Indonesia by counter-terrorism unit Densus 88. These arrests have primarily taken place on the island of Java, where the four largest cities in Indonesia are located, including Jakarta and Bandung. The week prior to the arrest of the five terrorists in Bandung and the seizure of the chemical liquid, the unit arrested 4 suspected terrorists.
August 11th- 1 man arrested in Serpong Utara, South Tangerang, Banten suspected of being a recruiter and fundraiser for pro-Islamic State terrorists in the Philippines. Police suspect the man is a member of Jemaah Ansharut Daulah.August 12th â 1 man arrested in Sumedang, West Java for his alleged involvement in the Kampung Melayu attack which killed 3 police officers in May in Jakarta. Police say he is a member of Jemaah Ansharut Daulah.August 13th â 2 suspected terrorists were arrested in Slawi, Tegal district, Central Java for involvement in the financing and assistance lent to another terrorist for him to go to Marawi City, Philippines.
A month before these arrests, four terrorists were arrested around Bandung after an explosion took place at a bomb-makerâs house in the city, revealing a plot to bomb three targets in Bandung including 2 restaurants and a church. The arrested bomb-maker was preparing pressure cooker bombs packed with nails, not unlike two previous attacks in Indonesia in 2017. The two previous attacks took place in February and May of this year in Bandung and Jakarta respectively.
On February 26th, a pressure cooker bomb filled with nails was detonated by a terrorist in Pandawa Park in Cicendo, Bandung. The blast did not injure anyone, and the suspect was later cornered in an office building and shot. He died on the way to the hospital. The man was part of Jemaah Ansharut Daulah, and had demanded the release of JAD members detained by Densus 88.On May 24th around 9 p.m. twin suicide bombers detonated explosives minutes apart at the Transjakarta bus stop in Kampung Melayu, East Jakarta. The blast killed 3 police officers, wounded 5 others, as well as 5 civilians. The explosives used were pressure cooker bombs filled with nails. The attack is believed to have been perpetrated by JAD members, while the Islamic State claimed the attack. This was the deadliest attack in Indonesia since the Jakarta attack in January 2016.
These past attacks and arrests have shown dedication towards a cause, but lack of careful planning. The attacks in 2017 have been small scale, using crude explosives leading to relatively few deaths and minimal damage to surrounding areas. The arrest of the bomb-maker in in July had shown that they were experimenting with different levels of explosives, but were progressing towards making more deadly bombs. These new arrests made on Tuesday on the other hand show a significant development in the methods of the groups. The seizure of containers containing a chemical liquid shows that the bombs to be used in the attacks at the end of the month were going to be more sophisticated than previous pressure cookers bombs. A bomb made with chemicals would add to its destructive force, and reveals that terrorists in Indonesia are looking to kill and wound an increasing amount of people. Members of the police who entered the house said they endured a burning sensation and redness on their skin due to the chemicals present[6]. An attack of a chemical nature could lead to mass casualties. This attack seemed focused on killing and damaging government forces and property like the May 24th suicide bombing in Jakarta, but unlike the targets revealed during the early July arrest of the bomb-maker in Bandung who had looked to attack more public areas where civilian casualties would be high. The near future is likely to see more arrests made of suspected terrorists and seizure of bomb making materials. An attack in Jakarta or Bandung is also likely with the arrests in the last few months showing that both cities were to be attacked.
Additionally, there continues to be a threat of attacks on security forces using bladed weapons. The most recent examples of this type of attack are on June 25th when a police officer was killed at a checkpoint at the North Sumatra Police HQ in Medan, and on June 30th when two officers were stabbed in a mosque near the Bhayangkara Police HQ in Jakarta. The threat of Islamic militants in Indonesia continues to be significant despite the governmentâs best efforts to combat it through police raids and shutting down âTelegramâ for a time, an encrypting messaging service preferred among terrorists.
[1] Unknown, âJamaah Ansharut Daulahâ, http://www.globalsecurity.org/military/world/para/jad.htm, n.d
[2] Marsiela, Adi, âIndonesia says militants preparing chemical attacks nabbedâ, http://abcnews.go.com/International/wireStory/indonesia-police-arrest-militants-preparing-chemical-attacks-49226341, Associated Press via ABC News, 15th Aug 2017
[3] Reinard, Steffano, âIndonesia police uncover alleged plot to bomb presidential palaceâ, https://www.reuters.com/article/us-indonesia-security-idUSKCN1AV193, Reuters, 15th August 2017
[4] Almanard, Alin, â Thwarted chemical attack points to higher sophistication of terror plotsâ, http://jakartaglobe.id/news/thwarted-chemical-attack-points-higher-sophistication-terror-plots/, Jakarta Globe, 16th August 2017
[5] Marsiela, Adi, âIndonesia says militants preparing chemical attacks nabbedâ, http://abcnews.go.com/International/wireStory/indonesia-police-arrest-militants-preparing-chemical-attacks-49226341, Associated Press via ABC News, 15th Aug 2017
[6] Reinard, Steffano, âIndonesia police uncover alleged plot to bomb presidential palaceâ, https://www.reuters.com/article/us-indonesia-security-idUSKCN1AV193, Reuters, 15th August 2017
Back to Reports & Resources