Topic: Social (Organised Crime, Trafficking)
EXECUTIVE SUMMARY
Given the available trends and background on âCriminalityâ incidents in Thailand, it is PROBABLE these kinds of incidents will continue to be the most frequently occurring incident in Thailand for the foreseeable future. This situation will be due to the continued existence of numerous organised crime groups in Thailand.
While efforts continue to be made to counter the drug trafficking as well as efforts against scam operations and illegal gambling in Thailand, the vast number of the incidents and foreign nationalities involved make it PROBABLE that efforts to undermine these activities rely on foreigners overstaying their visas.
INTRODUCTION
Previous analysis of crime in Thailand was able to identify and analyse drug trafficking in the country; assessing that âdrug trafficking in Thailand is POSSIBLY the most frequent crime in in the country. Drug trafficking activities are PROBABLY at their highest in Chiang Rai, Nong Khai, Nakhon Phanom, Phra Nakhon Si Ayutthaya, Satun and Songkhla provinces as these PROBABLY serve as the major entry/exit points as well as the storage/distribution areas for drug traffickers. (PRATTEN 2017a).â
Incidents plotted on the Intelligence Fusion platform before and since that analysis has begun to provide a clearer picture on criminal activity in the country. Utilising available data from 01 May 2017 â 31 October 2017 on incidents relating to crime in Thailand, this report will attempt to build upon prior analysis. 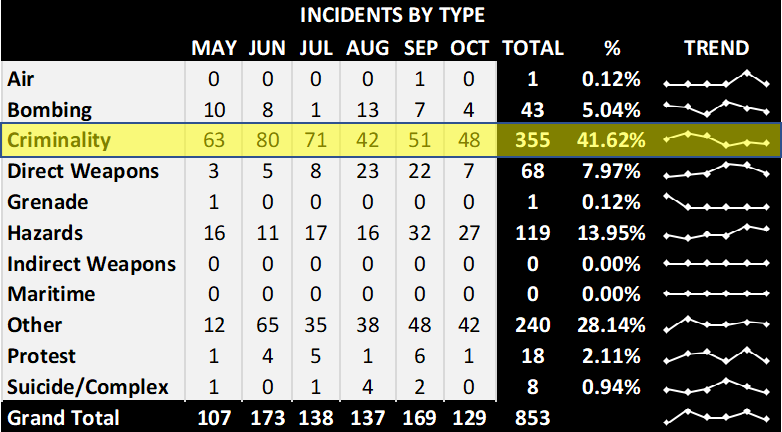 âCriminalityâ incidents in Thailand make up the vast majority of incidents plotted on the Intelligence Fusion platform since 01 May 2017; at the time of this report they make up 41.62% of incidents plotted, a very large majority over all other types of incidents currently being tracked (McCabe and Harrington, 2017). This is despite a decrease in such activities in recent months. This 41.62% is made up of several kinds of activities and is based on monitoring available open source reporting on Thailand; namely media outlets.
As shown below, the top three most frequent incidents are âArrests,â âDrug Traffickingâ and âMurder.â In terms of where criminal activities are concentrated, incidents plotted on the Intelligence Fusion platform indicate they are concentrated in Central Thailand, the North, the North-East and the South. 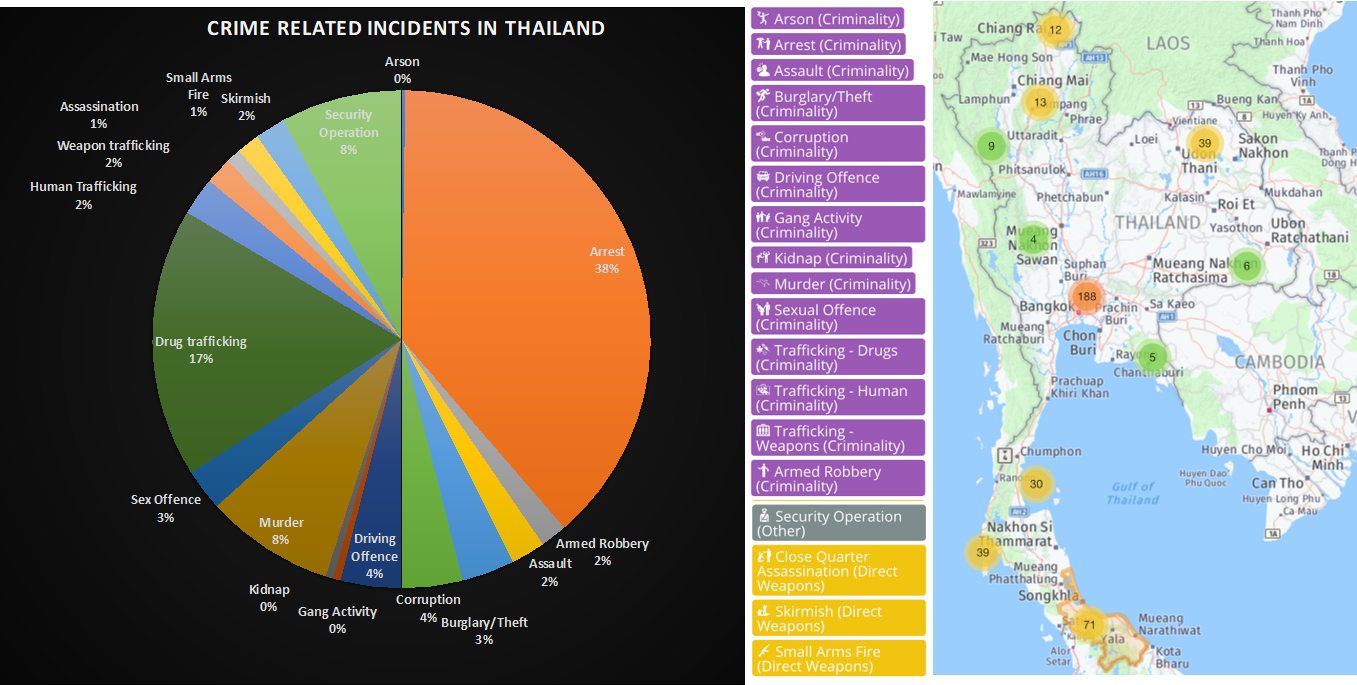 (Click on above image to expand)
COMMENT. While âArrestâ takes up the vast majority, these incidents consist of a variety of crimes or are plotted as arrests due to the nature of the incident at the time. For example, police arresting an individual in July 2017 for a crime committed 12 months before or arrests surrounding activities which do not fit within other types of incidents. COMMENT ENDS.
Drug Trafficking and Murders have been a frequent mention in Weekly Intelligence Reports. Thailand is a major thoroughfare for drug trafficking â specifically crystal methamphetamine a.k.a. âice,â methamphetamine pills a.k.a âyaba,â marijuana and kratom leaves. As shown in the imagery below, drugs are trafficked into and through Thailand in large quantities; originating from the Golden Triangle region along Myanmar/China. Traditionally they have been brought through Chiang Rai / Chiang Mai but recent reports indicate that the North-East of Thailand is becoming more popular for traffickers based in neighbouring countries and China (McCabe and Harrington, 2017, PRATTEN 2017a, Promyamyai and Jones, 2017, Elswood, 2017, PRATTEN 2017b). 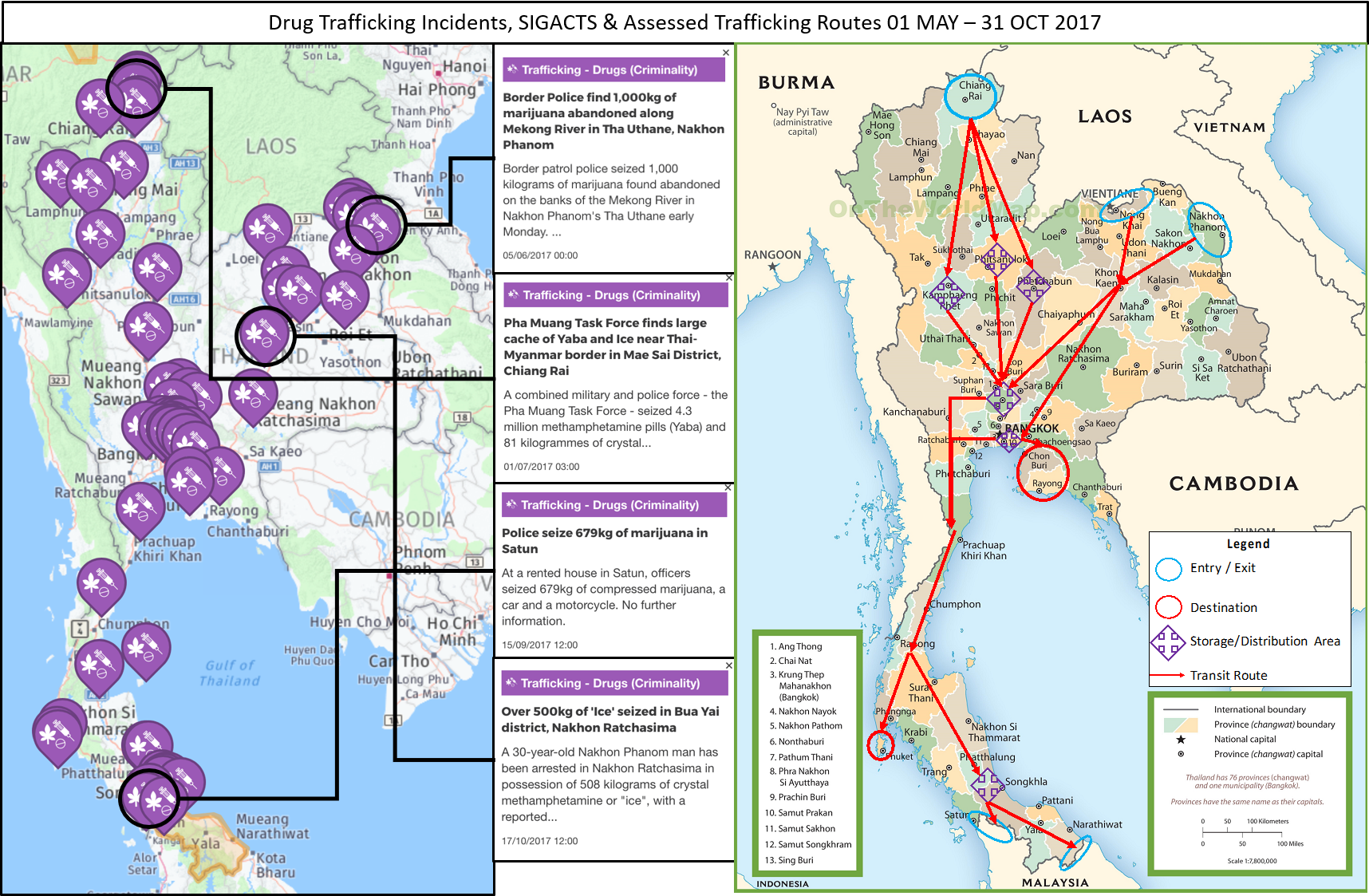 (Click on above image to expand) Full incident details available to subscribers.
As for murders, incidents plotted since 01 May 2017 have been for a variety of reasons â from organised crime disputes to conflicts between individuals. Most of the time, these murders have been Thai victims committed by Thai perpetrators (McCabe and Harrington, 2017).
COMMENT. The large quantities of drugs shown are the largest found at the time of this report. Several more of the 71 Drug Trafficking incidents feature shipments of ice, yaba, marijuana and kratom. The number and scale of these incidents, as well as murders, indicate established and entrenched organised crime networks operating in Thailand. COMMENT ENDS.
Further background research on organised crime in Thailand indicates that organised crime has developed in the country as far back as the 1970s. A multitude of groups exist of domestic, foreign or sometimes a mix of foreign and Thai criminals working in mutual business arrangements. Foreign organised crime groups in Thailand include German, British, Irish, Russian, West African, Filipino, the Yakuza, Chinese Triads or Taiwanese and South Korean gangs. Their preferred locations are in prominent tourist centres such as Pattaya and Phuket as these areas provide cover for their operations amongst fellow citizens. In addition, their operations are bolstered by lax laws, porous borders and â in some cases â alleged assistance by corrupt law enforcement officers (Schmid, 2010, Hays, 2008).
Aside from the drug trafficking, information found on organised crime in Thailand indicates additional activities:
Document Forgery & Counterfeit Goods Illegal Gambling Human Trafficking â Thailand is both a country of transit and source country for human trafficking. In particular, women for the sex trade. While it has made efforts, it is regarded as a Tier 2 country in the USA (Office of the Under Secretary For Civilian Security Democracy & Human Rights, 2017). Weapon Trafficking â particularly from Cambodia through to Myanmar. Scams â these can take many forms. Real estate scams have been long running in Thailand where foreigners are tricked into buying land they are not legally allowed to own. In addition, there have been several lottery and credit card scams being run in major tourist areas such as Phuket, Bangkok and Pattaya along with Taiwanese led âMacau Scamsâ in Bangkok. Macau Scamsâ¯usually start with a phone call from a scammer pretending to be an officer from a bank, government agency or debt collector.â¯The scammer will claim that the potential victim owes money or has an unpaid fine, often with a very short window of less than an hour, to settle the payment or face “dire consequences (McCabe and Harrington, 2017, Schmid, 2010).”
While the above paints a picture of well-established and well-entrenched organised crime networks, an examination of the âArrestâ incidents from 01 MAY 2017 â 31 OCT 2017 indicates efforts are being made â shown by the examples outlined in Bangkok and Chon Buri â to undermine organised crime networks. A number of foreigners in recent months â Chinese, Taiwanese, Japanese and Africans â have been arrested. Very often, they have been in large groups. In a number of these cases, authorities have been able to have those arrested deported or many of those arrested have simply overstayed their visas. 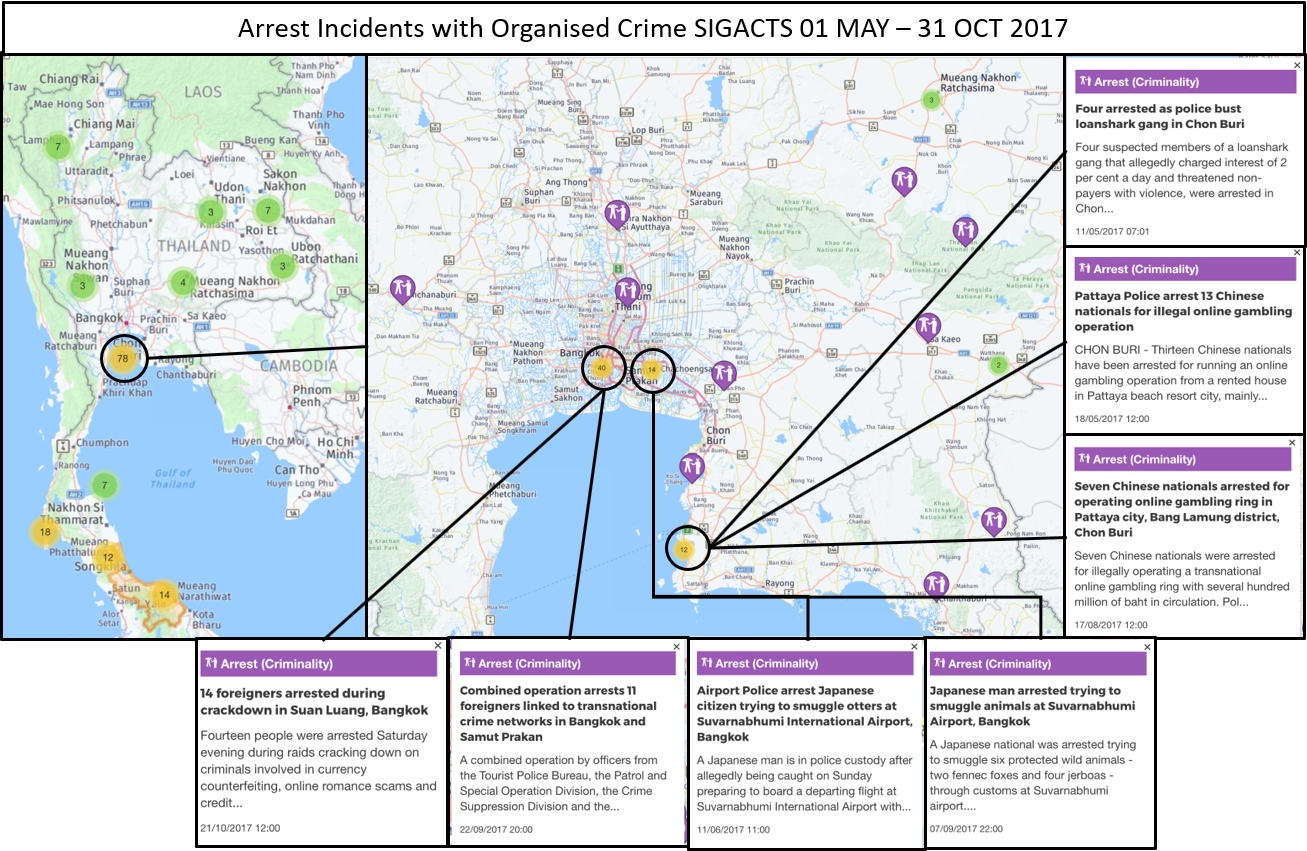 (Click on above image to expand) Full incident details available to subscribers.
COMMENT. While a number of arrests have been made against what appear to be organised crime members in scams, there appears to be little progress being made against senior leadership members of these networks. In addition, the background information used for identifying the organised crime networks and their activities has indicated well established organised crime activities such as Human and Weapon trafficking being regular and entrenched yet monitoring of Thailand has not been able to capture enough data to support this. Having said that, the same reports used to provide a background on organised crime have indicated that authorities can be complicit or turn a blind eye to their activities. COMMENT ENDS.
ASSESSMENT

Given the available trends and background on âCriminalityâ incidents in Thailand, it is PROBABLE these kinds of incidents will continue to be the most frequently occurring incident in Thailand for the foreseeable future. This situation will be due to the continued existence of numerous organised crime groups in Thailand.
The data, background and incidents shown above provide little doubt that organised crime continues to be an entrenched problem in Thailand. The continued and large scale of drug trafficking incidents makes it PROBABLE that the only change to this kind of activity in the future will be the entry point into Thailand, with traffickers preferring to enter Thailand from the North-East. The routes and main locations will PROBABLY remain the same along with the types of drugs being trafficked. In addition, the amounts of drugs being produced will POSSIBLY become even larger.
While efforts continue to be made to counter the drug trafficking as well as efforts against scam operations and illegal gambling in Thailand, the vast number of the incidents and foreign nationalities involved make it PROBABLE that efforts to undermine these activities rely on foreigners overstaying their visas. If this were to change in the future â with foreigners keeping their visas up to date â efforts to counter organised crime in any respect will become even less effective.
With the differences between background information and number of incidents in regards to Human and Weapon trafficking, it is POSSIBLE this is due to such activities not being reported by authorities, hence no reports coming in via open sources. Making the topic of Crime in Thailand an area that will need to be re-visited and analysed in much greater detail.
References
ELSWOOD, J. 2017. South East Asiaâs Amphetamine Crisis. Intelligence Fusion [Online]. Available: https://www.intelligencefusion.co.uk/analysis/author/Jonny-Elswood [Accessed 15 October 2017].
HAYS, J. 2008. Crime In Thailand: Rape, Murder, Youth Crime, Human Trafficking And Criminals High On Drugs [Online]. Saga: Facts and Details.com. Available: http://factsanddetails.com/southeast-asia/Thailand/sub5_8f/entry-3280.html [Accessed 01 November 2017 2017].
MCCABE, M. & HARRINGTON, D. 2017. Intelligence Fusion Platform [Online]. London: Ambix. Available: https://www.intelligencefusion.co.uk/ [Accessed 12 August 2017].
OFFICE OF THE UNDER SECRETARY FOR CIVILIAN SECURITY DEMOCRACY & HUMAN RIGHTS. 2017. Trafficking in Persons Report 2017. Trafficking In Persons Report [Online], 2017. Available: https://www.state.gov/documents/organization/271339.pdf [Accessed 29 June 2017].
PRATTEN M. 2017a. Thailand Fortnightly Snapshot: Crime Analysis in Thailand. Intelligence Fusion [Online]. Available: https://www.intelligencefusion.co.uk/single-post/2017/08/07/Thailand-Fortnightly-Snapshot-Crime-Analysis-in-Thailand [Accessed 07 August 2017].
PRATTEN M. 2017b. Thailand Weekly Intelligence Report – 22 October 2017. Thailand [Online], 22 October 2017. Available: https://www.intelligencefusion.co.uk/single-post/2017/10/22/Thailand-Weekly-Intelligence-Report [Accessed 30 October 2017].
PROMYAMYAI, T. & JONES, A. 2017. Shallow Graves in Thailand’s Drug Warehouse. Digital Journal [Online]. Available: http://www.digitaljournal.com/news/world/shallow-graves-in-thailand-s-drug-warehouse/article/505515 [Accessed 21 October 2017].
SCHMID, T. 2010. The Darker Side of Tropical Bliss: Foreign Mafia in Thailand. Featured Articles [Online]. Available: http://www.thailawforum.com/foreign-mafia-thailand.html [Accessed 02 November 2017].
Back to Reports & Resources