– In April, criminality-related incidents dominated the region, constituting approximately 66% of the recorded events. Among them, murders (27% of total incidents), armed robberies (12%) and narco-trafficking (9%) topped the list.

– Compared to the previous month, April showed an increase in shooting incidents in the Dominican Republic and in Trinidad and Tobago.

– These two countries, together with Guyana, presented the highest number of security reports (60% of the total). With an increase of criminal activities also reported in the Dominican Republic.

– During the reported period, Antigua and Barbuda experienced a sharp increase in drug-trafficking reports.

– On April 19th, Miguel Diaz-Canel was officially elected President of Cuba. Diaz-Canel is the first president of the island not belonging to the Castro’s family. 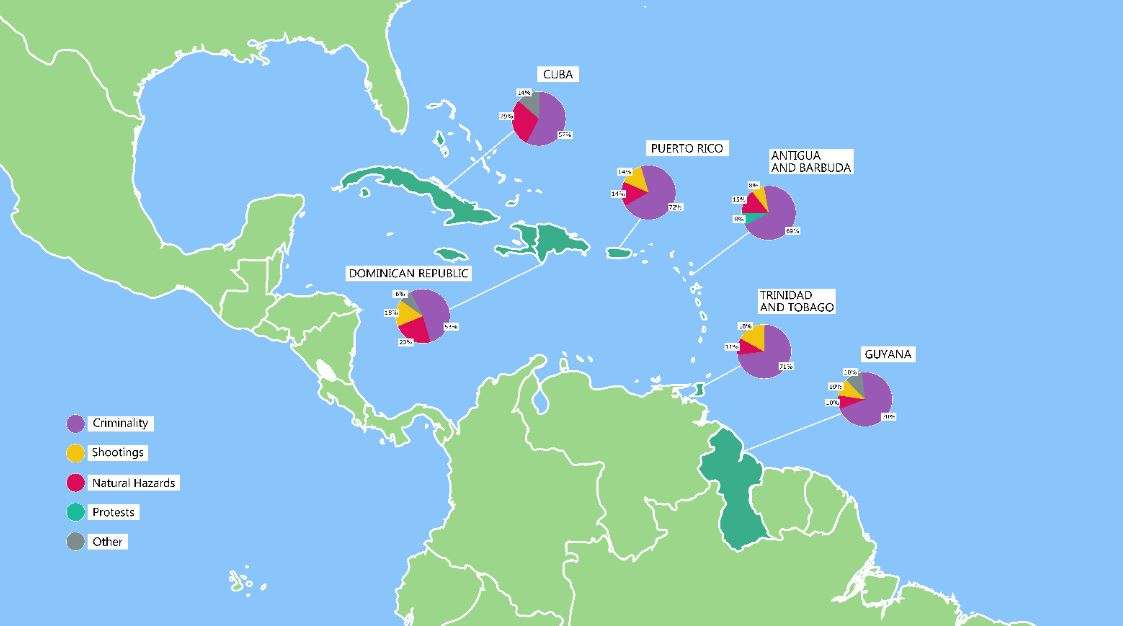 Within the Caribbean, Trinidad and Tobago is the country which experienced the highest number of security incidents. As for the rest of the region, most them (89%) were criminal related, often involving street shootings and murders caused by clashes between the country’s criminal gangs. April saw an increase in shootout incidents especially in the northern provinces of the country, both in the outskirts of the capital Port of Spain and in the Chaguanas area. Reportedly, the urban areas of the Diego Martin region have been particularly affected by local gangs, who increased the number of armed robberies against locals.

This new wave of criminality could possibly be related to the emergence of a new gang, currently in the process of expanding its initial financial assets through robberies. Although in March the country experienced a wave of kidnappings which suggested the possibility of an emerging trend, April reports did not highlight the continuation of such a pattern. 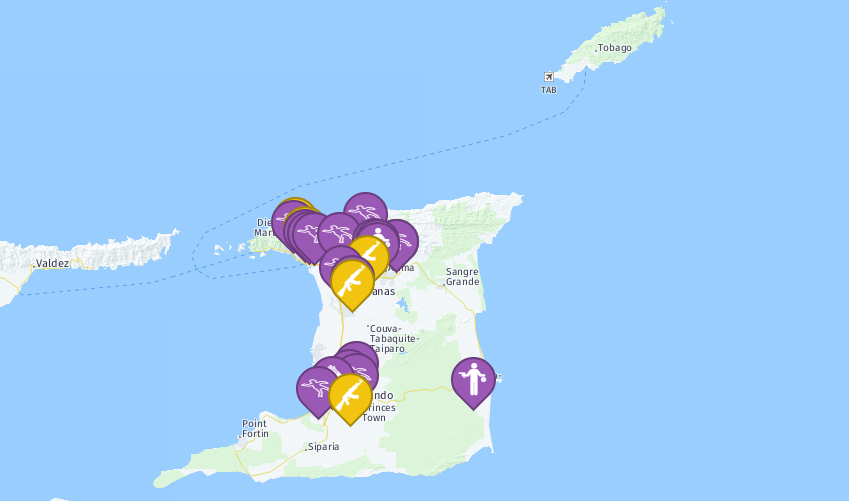 The country shares the region-wide insecurities deriving from widespread criminality and gang activities. In April, Guyana reported an increased number of criminal incidents, particularly of murders and armed robberies in the urban areas of the capital Georgetown. Additionally, the current month presented two new trends in the country’s security landscape: corruption and piracy. On the 20th of April, port authorities tightened their anti-smuggling operations, and seized a Trinidadian vessel involved in illegal trade of over 600,000 litres of crude oil to Suriname. Oil smuggling has been a relevant challenge, as traffickers repeatedly fail to declare the nature of their shipments to avoid taxes. The vessel seizure appears to be a first major step of the Guyanese government to curb such practices. The second corruption-related incident involves the re-opened investigations on the Guyana Sugar Corporation (GuySuCo), whose employees allegedly in 2015 were involved in a fraud scheme costing the company over USD 167,000.

A piracy incident occurred on the 27th of April in the Atlantic Ocean, within Suriname territorial waters. Nevertheless, the incident involved Guyanese nationals, both on the pirate and on the victim sides. Reportedly, four different Guyanese fishing vessels were attacked and robbed by a group of Guyanese pirates. At the time of writing, only four of the 20 crew members involved in the incidents returned safely to the mainland while the other 16 are to be presumed dead. Although piracy in the Caribbean is a long-standing phenomenon, the violence of this last assault indicates an erosion in the security situation at sea in Western Atlantic waters. 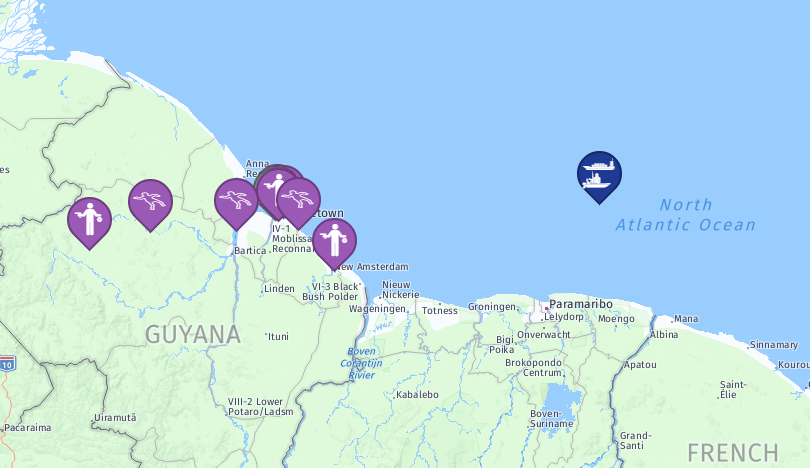 The capital city of Santo Domingo consistently presents the highest concentration of incident reports – mostly of criminal nature – followed by the Santiago province. This month, the country experienced an increase in shooting events, although only one of them was directly caused by skirmishes among criminal gangs. More interestingly, April saw an evolution in the current tensions between the Dominican Republic and Haiti. While in March demonstrations against Haitian immigrants broke out in Santo Domingo and in border areas, this month the situation was inverted. On the 4th of April a group of Haitians assaulted a Dominican army unit by throwing rocks across the border against them. Subsequently, on the 23rd of April, a Haitian was killed after he tried to assault a Dominican soldier to steal his weapon. Although the diplomatic standstill of March was resolved by the two countries, the situation on the ground continues being tense and prone to escalations, especially along border areas. 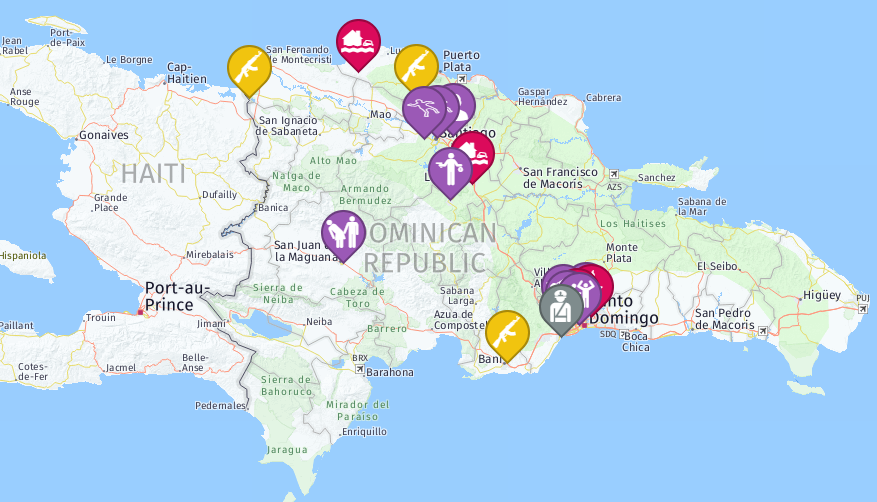 April did not present any relevant change in the occurrence of security incidents across the country, but it highlighted a new pattern in their disposition. During the second half of the previous month, Jamaican Prime Minister Andrew Holness declared a state of emergency in the Saint Catherine parish (Centre-South region of the island) to address the increasingly problematic criminal situation in the area. The measure added to the still-standing state of emergency in Montego Bay. Declaration of emergencies have been widely used by the Jamaican government to address security-related problems, and to enhance the capabilities of police authorities. Nevertheless, such measures repeatedly proved ineffective as they merely prompted criminal gangs to relocate their activities in other regions. Following this trend, approximately 70% of the security incidents in April occurred in the North/North-Western parishes of the island, while only one incident was reported in the areas affected by the emergency declarations: on the 2nd of April, where a man was arrested at Montego Bay Airport while trying to smuggle 3.5 Kg of cocaine on a flight to Brussels. 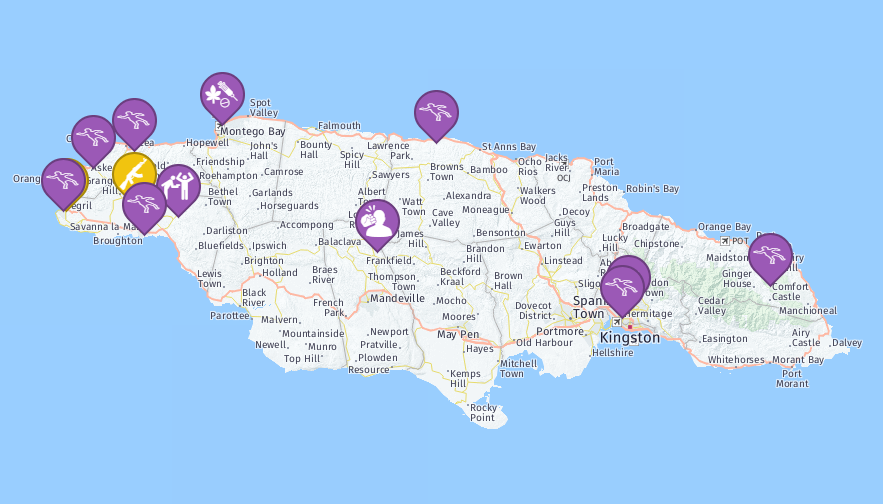 After the national elections of the past month, and Raul Castro’s decision not to run for a further presidential term, on the 19th of April, the Cuban Parliament elected Miguel Diaz-Canel as President, the first not belonging to the Castro’s family. Diaz-Canel’s election was unsurprising given his role as vice-president under the previous government, and it is unlikely to change the current political landscape in Cuba as in the near future Raul Castro is expected to maintain a strong ascendant over the new President. The aftermath of the elections also witnessed a change in nature of the incidents in the country. While during the electoral period most of the reports regarded the arrest of political dissidents, April presented a variety of criminal-related events, encompassing assaults, murders and human trafficking reports. Additionally, in the first half of the month, health authorities reported the spread of new Zika virus cases among pregnant women in Las Tunas, Eastern province. Although the virus is common among Caribbean and Central American countries, the concentration of cases in a specific province suggest an endemic relevant lack of sanitary infrastructures and prevention plans. 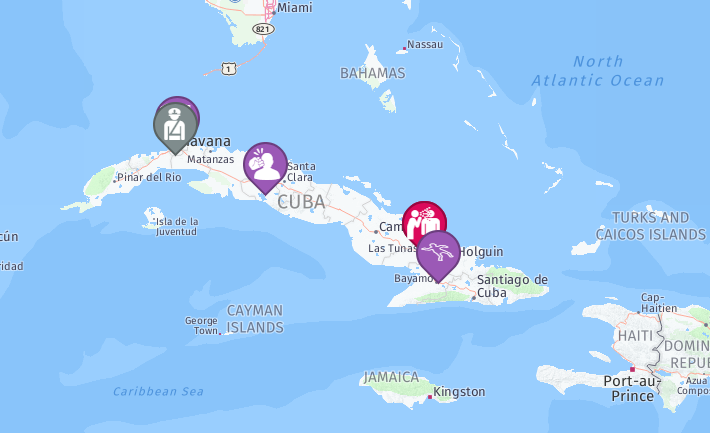 During this reporting period Antigua and Barbuda stood out as a major hub in Caribbean narco-trafficking routes. Almost half of the incidents reported (46%) regarded drugs smuggling crimes, with over 216 Kg of cannabis seized by local authorities throughout the month. The incidents however presented a new pattern than the one traditionally observed: reports regarded international smuggling of cannabis into Antigua and Barbuda. Drugs entered the island hidden on international flights coming from Canada, Jamaica and the United States. This suggests the country to be an important node for drugs distribution across the Caribbean archipelagos – a role further enhanced by its strategic position at the centre of the area – rather than a gateway for introducing drugs in North America or Europe. 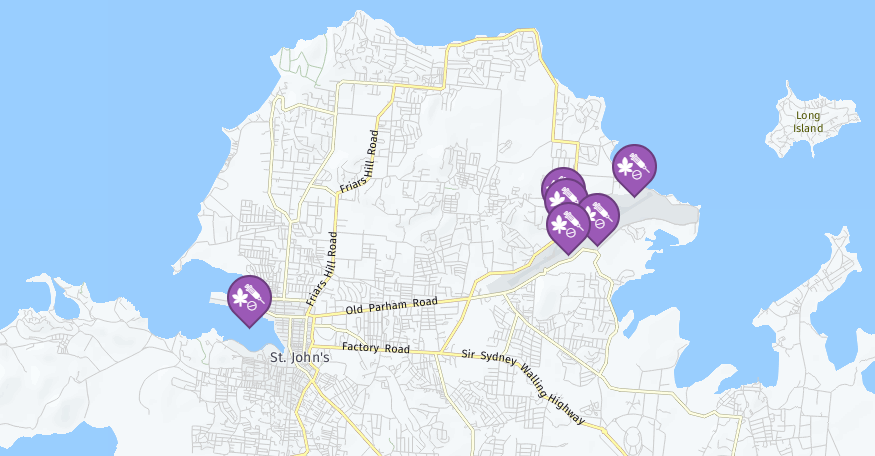 Two sets of additional issues worth considering emerged during the last month. The first one regards the control of street protests and demonstrations in Haiti. Although the government managed to control the tensions in Petit-Gôave, nevertheless it continued to show its weaknesses in addressing other protests. On the 19th of April police forces opened fire against a group of protesters from an anti-government march in Port-au-Prince, killing one participant. A day later, on the 20th of April, again two people were severely wounded in Jacmel by police shooting, after a street protest turned violent. Both the incidents – combined with the tensions of the previous month – highlight the shortfalls of local security forces in containing demonstrations. 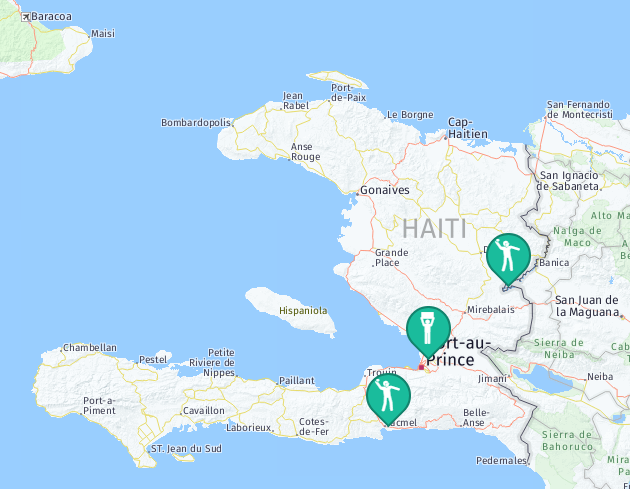 The second issue regards the region-wide challenges of human trafficking. Starting from the second half of March and continuing during the first weeks of April, the region experienced several human trafficking incidents. In April over 130 people were involved in such incidents. The reason is to be seen in the favourable weather conditions of the last month, which eased the passage of migrants through sea routes. To address the problem, on April 23rd, the Royal Dutch Navy sent a military vessel to Curaçao waters to support the local coast guard in anti-immigration patrolling. 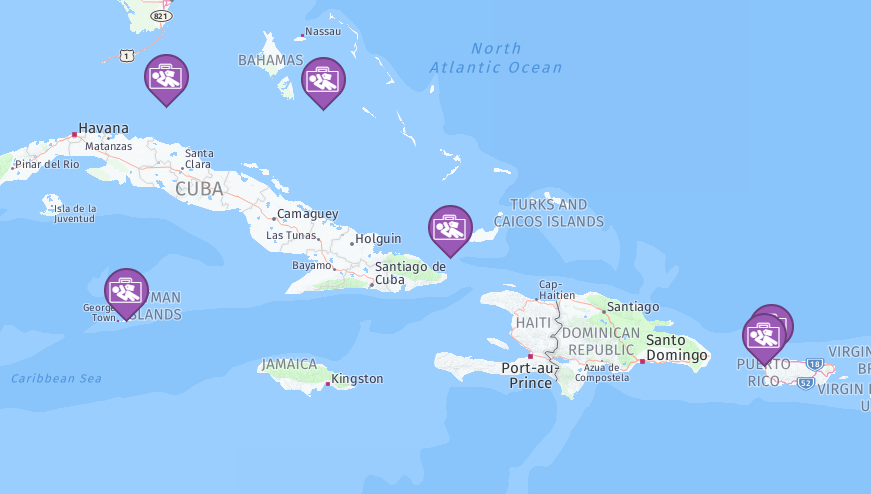 It is likely that in May the same trends of incidents will continue in the Caribbean. The region is highly affected by criminality, which is evenly spread across countries. It is likely that in Cuba arrests of local activists will continue, to decrease the level of contestation in the aftermath of the elections. Concurrently, the problem of human trafficking may exacerbate. The hurricane season will start in June, thus May could offer the last chance of good weather to undertake migratory sea routes. The main trends to be monitored are criminality, piracy and narco-trafficking. Following the enhanced gang activity in Diego Martin in Trinidad and Tobago, it is possible that a clash with existing criminal groups will lead to an increase in the criminal and violent incidents in the area. The piracy problem in the Atlantic Ocean may continue being extremely relevant, especially given the high violence of the last event. Finally, the number of police operations in Antigua and Barbuda to stop the smuggling of drugs in the archipelago could prompt international dealers to find new safe harbours for the delivery of their narcotics.